Published by IndustriALL Global Union, May 28, 2015 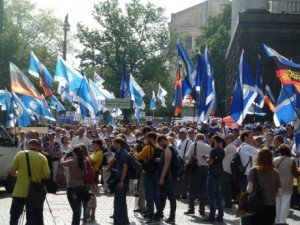 Unions protest outside meeting of Ukrainian government cabinet on May 27, 2015 (IndustriAll Global Union)

On 27 May, Ukrainian unions picketed the Cabinet of Ministers of Ukraine. The 1,000 participants demanded that the government stop their anti-social policy and take action to resolve social and economic problems.

Apart from the full payment of wage arrears and compensation to the workers for the delayed wages, the unions raised a number of important demands: 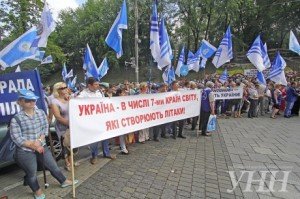 Union protest in Kyiv on May 27, 2015. Banner reads ‘Ukraine is among seven countries in the world that make aircraft. Well, it used to be.’ (IndustriALL Global Union)

On 27 April the Joint Representative Body of Ukrainian Trade Unions decided at a meeting to enter into a collective labour dispute at a national level with the Cabinet of Ministers of Ukraine and the Joint Representative Body of the Employers. The government has previously avoided solving workers’ social and economic problems with social dialogue. Instead, unions’ demands have been ignored, resulting in a national collective labour dispute.

The picket on 27 May was in support of the demands, and several IndustriALL Global Union affiliates participated. The next pickets are scheduled for 3 and 10 June. 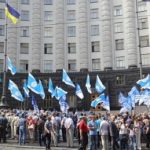 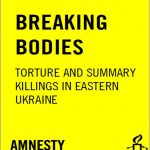