Introduction by New Cold War.org, editors, March 23, 2015: Trade unions from 14 towns and cities in the Luhansk Peoples Republic staged a rally today to condemn Kyiv’s war in eastern Ukraine and its associated economic blockade. The unions are also demanding the wages and social payments which the Kyiv government has refused to pay to the people of the region. The unions estimate the unpaid amounts to the equivalent of $510 million. They have formulated their demands in a letter to Ukraine President Petro Poroshenko and his government. 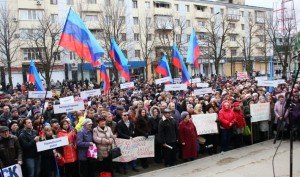 LUGANSK, Novorossiya–Representatives of the trade unions of 14 cities and towns of the Lugansk People’s Republic have held a rally on March 23 to condemn the economic blockade imposed by the Kiev authorities. People demanded that Petro Poroshenko and Arseniy Yatsenyuk lift the economic, social and transport blockade against the Luhansk region, pay off the debt owed for salaries and social payments, and implement the Minsk ceasefire agreements.

People carried placards reading, ‘No to genocide in Lugansk!’, ‘Poroshenko! Down with double standards!’, ‘Love will conquer evil and hatred!’, ‘Thanks, Kiev, for starvation and unemployment!’, ‘Poroshenko! We are against the economic and financial blockade!’, ‘We demand the implementation of the Minsk agreements!’, and ‘The trade union of the Lugansk People’s Republic is with the people!’

A written appeal has been prepared by the unions and is addressed to Ukrainian President Petro Poroshenko. It reads:

The senseless and cruel war waged by you against the people of Donbass has already taken away over 6,000 lives of innocent civilians. Millions of lives, including those of children, have been ruined and hundreds of people have become disabled. Thousands of civilians of the Lugansk region have become refugees in order to save their children and parents from the war.

Despite the horror of war, worker collectives haven’t left their jobs, they continue to perform their duties. To you, we are subhumans and biomass. It was you who gave orders to kill us, and you continue to pursue the policy of the ‘party of war’ in the formerly united country.

Poroshenko! You bear responsibility for all the sufferings, tears and grief of people! Stop the genocide of the ordinary people! Our demands are legitimate and fair, and are based on the international law.

The document will be handed over to representative of the Organisation for Security and Cooperation in Europe. They, in turn, will give it to the leaders of Ukraine. 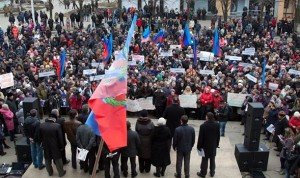 The trade unions made their demand in a letter addressed to the Ukrainian president and the prime minister. The document was adopted at a meeting of trade unions from 14 cities and districts of the Lugansk People’s Republic.

The letter also contains a demand on Kiev “to lift the economic, social and transport blockade of the LPR” and “ensure the implementation of the Minsk accords not in words but in deeds.”

The Ukrainian government halted all social payments “on certain territories” of the Donetsk and Luhansk People’s Republics as of December 1, 2014 in accordance with President Petro Porohenko’s decree and also prohibited banks to service corporate and household accounts.

Meanwhile, the LPR government passed a resolution on switching to a multi-currency system starting March 15 to pay for goods and services with the hryvina, the ruble, the US dollar and the euro.

LPR head Igor Plotnitsky said on March 12 that the republic would stay in the hryvnia zone, if Kiev complied with the Minsk accords.

The Ukrainian government estimates the total number of pensioner refugees in the self-proclaimed Donetsk and Luhansk People’s Republics known as Donbas at 1.1 million people.

Deputy Maria Ionova from the Petro Poroshenko Bloc pro-government parliamentary faction admitted on March 12 that Ukraine was not making any social payments to Donbass pensioners. “The government will make these payments as soon as it has access to these districts or when people cross into the territory controlled by the government and register as internally displaced persons,” she said.

A delegation of 15 UN humanitarian agencies visited Ukraine on March 12-14 and held, in particular, a meeting with Ukrainian Deputy Prime Minister Gennady Zubko. The delegation insisted that Kiev should fully lift duties on humanitarian aid and discussed the issue of Kiev’s failure to pay pensions in the territories uncontrolled by the government and also spoke for lifting restrictions on the movement of people and the delivery of goods to Donbass. 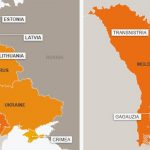 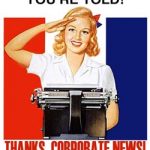