Under threat from the coupist right but with great popular support, Luis Arce assumes the Presidency of Bolivia 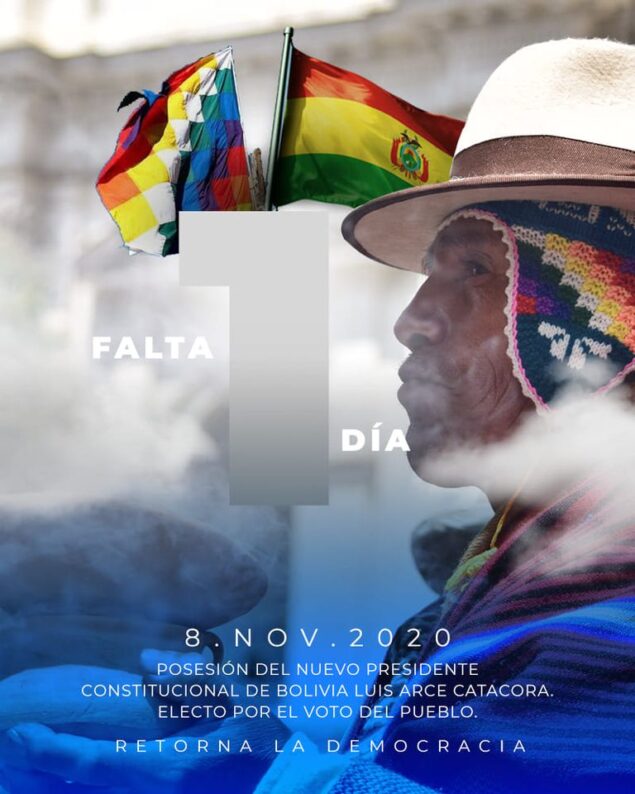 La Paz is preparing for the assumption of the new government of Luis Arce and David Choquehuanca. The Plaza Murillo, where the Palacio Quemado is located, is ready for what is expected to be a massive event. The stages, the rehearsals, the international media, and delegations from various countries around the world have begun to arrive in the last few days.

La Paz is preparing for the assumption of the new government of Luis Arce and David Choquehuanca. The Plaza Murillo, where the Palacio Quemado is located, is ready for what is expected to be a massive event. The stages, the rehearsals, the international media, and delegations from various countries around the world have begun to arrive in the last few days.

Nearby, in the Plaza San Francisco, as well as in adjacent streets, social movements, indigenous, peasants, from the city of El Alto, the Central Obrera Boliviana, the Unity Pact, have begun to meet. They are there to support the new government, to celebrate their own triumph: the victory of October 18 was made possible by a plot of popular resistance that left deep wounds, including the massacres of Sacaba and Senkata, the persecution of leaders, the militarization of territories, daily threats from the de facto government.

The social climate is now calm, a calm that increases as the hours pass, and leaders and official envoys arrive from different countries . The first to arrive was the Undersecretary of the Treasury for International Affairs of the United States, Brent Mcintosh, and it is clear that the attempts at destabilization of the last few days failed to achieve their goal.

The last coup d’état maneuvers took place in the Santa Cruz bastions in recent days, with mobilizations, blockades, backed by Luis Fernando Camacho, who asked Jeanine Añez to issue a decree to request an audit. Part of the plan that was underway was explained by Evo Morales from Buenos Aires, who said that “the right wing under the tutelage of the US empire, until three days ago, tried to prevent Lucho from taking office as president”.

According to Morales, the plan was headed by the Commander in Chief of the Armed Forces, General Sergio Orellana, who tried to convince first several generals of the army and other forces, then colonels. “What did they want to do? The de facto president, if the armed forces were mobilized, would leave a military junta in the presidency. Two years ago, they instructed that the papers for handing over to the new military command be prepared, and it has not been easy to guarantee Arce’s possession”.

The Armed Forces issued a statement on Friday, in which they affirmed that they guarantee “respect for the political Constitution of the State and for the legally and democratically constituted government,” in an event that installed a climate of defeat among those who were still maintaining last-minute expectations of a coup.

The inauguration will therefore take place in a context of less immediate political tension, with the absence of Añez who, according to reports, decided to move to the city of Trinidad, in the department of Beni, where she is from. Her absence will be accompanied by that of former de facto ministers Arturo Murillo and Luis Fernando López – whose whereabouts are unknown and there is talk of a possible flight from the country – and much, if not all, of what was once the cabinet.

The de facto government is leaving behind a situation of mismanagement that was denounced by the Commission for the Transition of the Movement to Socialism (MAS) that corroborated “almost a year of chaos, of robbery during this coup regime that is leaving in a few hours”. The Commission stated that it had visited the 16 ministerial offices, where they were able to see that documents and computers had been stolen from the Ministry of Health, that land had been illegally handed over, and that resources had not been allocated for the diesel subsidies.

“From the economic bonanza we were in at the Latin American level, we have fallen to a disaster and this cannot be left unnoticed, these are people who have operated only for their own pockets, who have thought of themselves and of stealing”, affirmed the head of the Commission, Wilfredo Chavez.

This mismanagement explains part of the defeat of the de facto government and right wing candidates. Another explanation for the victory of the MAS has to do with the unity that was achieved around the presidential formula, and the capacity for resistance and reorganization that the social, indigenous, peasant, and workers’ movements demonstrated in emblematic areas like El Alto.

The latter is central to understanding one of the demands that is most expressed among different leaders of organizations: the need for renewal in government. This is one of the keys to the new era of Bolivian change, which managed to return to political power in a situation of extreme difficulty.

It is therefore a historic inauguration. On that same date last year, November 8, 2019, a police riot began, one of the central elements of the coup. The streets of La Paz, of El Alto, reflect today another climate, marked by expectations for the new government, the need for it to be able to respond to the economic situation, something that Arce anticipated would take nearly two years.

Sunday’s massive event, where it was previously announced that, among others, all 36 indigenous nationalities recognized in the Constitution will be present, will be followed by the return of Evo Morales to the country across the border with Argentina. He will be accompanied by a caravan that will take him to Chimoré, where a major gathering is expected. According to Morales, he plans to remain in the Tropic of Cochabamba, where he was trained as a leader and still serves as president of the Six Federations.

The indigenous 'Ponchos Rojos' are guarding the presidential place in La Paz, Bolivia, ahead of Luis Arce's inauguration tomorrow. Far-right groups have said that they'll try to stop the ceremony taking place. pic.twitter.com/xVockZU4ar