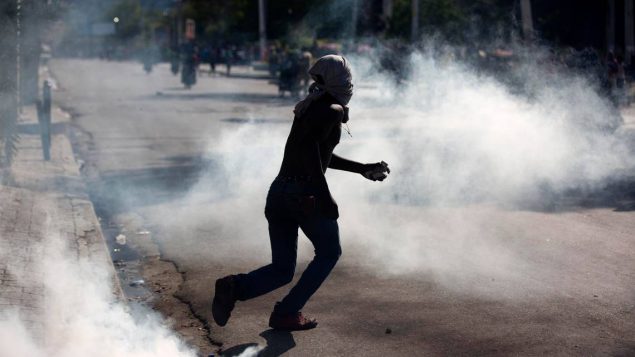 Haiti has seen more than 200 demonstrations since December with among other issues protesters demanding the resignation of the president.

“We do not believe this Council should link [the justice support peacekeeping mission’s] scheduled transition to legislative and local elections in Haiti scheduled for October 2019,“ Cohen said.

The United Nations first deployed a blue-helmeted peacekeeping force to Haiti in 2004, consisting of a large multinational military presence with soldiers from Brazil, Chile, Nepal and other nations. They steered Haiti through several hurricanes, tumultuous elections and a deadly 2010 earthquake.

In 2017, with a mixed legacy of controversy and stability, the Security Council began the withdrawal of the military soldiers but left foreign police officers to continue to provide support to the U.N.-trained Haiti National Police force. The smaller peacekeeping mission, which is now ending in October, focused on justice, human rights and police development.

In a brief statement on Friday, Cohen said the U.S. welcomes this final renewal of the peacekeeping mandate, and was mindful of the challenges ahead for Haiti. The country’s political actors, he added, need to engage in dialogue to find a lasting solution to the ongoing economic and political challenges.

Last month, following a series of tumultuous events including a 10-day lock down of the country in February by the opposition, the lower chamber of deputies fired the country’s prime minister, Jean Henry Céant, and his 21-member cabinet after only six months. The parliament has yet to vote on President Jovenel Moïse’s choice to replace Céant — former culture minister Jean Michel Lapin.

“This transition will mean a significant handover of responsibility into the hands of the Haitian government and its people,” Cohen said. “Now is the time for the government of Haiti to step up and assume its responsibility.”

For the most part, Security Council members have sought to provide a positive assessment of Haiti’s progress, with the United Nations’ help, over the last 15 years. Still, some nations remain nervous about what the lack of armed foreign police officers and armored vehicles may mean for the volatile country, which will now have to shoulder the burden of its own security.

“Haiti… has moved to a fully fledged political and economic crisis that has resulted since last July in a series of demonstrations and riots against the elevated cost of living, owing to inflation and the rapid depreciation of the local currency,” said European Union Ambassador João Vale de Almeida.

The country has seen more than 200 demonstrations since December, with protesters demanding the resignation of the president and denouncing the management of PetroCaribe, Venezuela’s discounted oil program with Haiti, in which the savings were supposed to be invested in social programs.

“The EU is concerned about the general situation in Haiti, “ Vale de Almeida said, adding that he worries about the ability of the Haiti National Police to conduct effective operations after peacekeepers’ withdrawal. “The persistent inability of the Haitian National Police and national authorities to control gang-related violence, with accusations of collusion and other dysfunctions, is of particular concern.”

Haiti National Police Director Michel-Ange Gédéon says he has confidence in the training of officers to take over once U.N. forces leave the island nation. By Carl Juste

Still, Friday’s decision did not come as a surprise. Diplomats have hinted that there is Haiti fatigue in international circles, and Haitians cannot expect the mission to stay forever. Earlier this year, a U.N. delegation visited the country to help prepare the report, which U.N. Secretary General António Guterres presented to Council members with a slew of recommendations, including the creation of a special political mission to continue some of the peacekeepers’ justice and security initiatives.

“The transition to a political mission… must be carefully managed and objectives-based,” Canada’s Ambassador Marc-André Blanchard warned last week. “The objectives that have not been achieved by [the peacekeeping mission] should serve as a starting point for the special political mission. Reducing the United Nations presence must also be gradual and carefully sequenced to minimize any negative impact and preserve hard-won gains made since 2004.”

Jean-Pierre Lacroix, U.N. under-secretary-general for peace operations, said the U.N. remains concerned about the political volatility, institutional fragility and economic stagnation that have exacerbated social tensions and adversely affected the humanitarian situation in Haiti. But, he said, “we trust in the capacity of the Haitian National Police to manage security” without international support.

Acknowledging that “significant improvements” in the professionalism of the Haiti National Police, U.N. High Commissioner for Human Rights Michelle Bachelet said “incidents of serious human rights violations, including cases of summary executions, continue to be reported, with limited accountability.”

“The national police conducts administrative investigations into the majority of allegations, yet judicial proceedings are rarely initiated against the alleged perpetrators,” she said. “In 2018, only 12 percent of cases of confirmed human rights violations were prosecuted, and no judicial measures were taken in the most emblematic cases. Perpetrators are consequently emboldened.”

While the special political mission will need to address these troubling human rights challenges, along with corruption and social grievances, Loune Viaud, the executive director of a Haitian nongovernmental organization, Zanmi Lasante, said the urgent humanitarian needs of women and girls, including sexual and reproductive health services for gender-based violence survivors, must also be addressed with the U.N.’s future presence.

“Watching a woman die because she reached us too late; seeing families devastated after losing a mother, a wife, or a daughter in childbirth are images one cannot forget,” Viaud said, noting that cancer is also an issue that primarily affects women in Haiti. “Childbirth should not be a death sentence in Haiti… No woman should die in Haiti because of lack of access to obstetric care or cancer.”

Jacqueline Charles has reported on Haiti and the English-speaking Caribbean for the Miami Herald for over a decade. A Pulitzer Prize finalist for her coverage of the 2010 Haiti earthquake, she was awarded a 2018 Maria Moors Cabot Prize — the most prestigious award for coverage of the Americas.