Protest in Haiti against UN sexual crimes against women

Last year, on March 16, 2015, AIDS-Free World has released an unseen, 2013 report by UN experts on the ways in which UN peacekeeping missions are addressing the issue of sexual exploitation and abuse perpetrated by their members. The report reveals profoundly different material than the annual report on the subject by the UN Secretary-General issued on February 16, 2016 and approved by the Security Council on March 11, 2016. That report is gaining much international media attention. In the following report, AIDS-Free World provides a side-by-side comparison of the two reports which shows they contradict one another and reveals a lack of accountability by the UN with respect to acts of sexual abuse committed by its peacekeeping forces.

Open Letter to Ambassadors of All United Nations Member States

As you know, the Secretary-General reports to you annually on progress against sexual violations committed by UN peacekeeping personnel. This year’s Special measures for protection from sexual exploitation and sexual abuse report, issued on March 13h, highlights the completion of a two-year-long “enhanced programme of action to combat sexual exploitation and abuse, a key aspect of which was the appointment of an independent team of experts to assess how four peacekeeping missions were addressing the challenge.”

That independent team of experts submitted its assessment, Expert Mission to Evaluate Risks to SEA Prevention Efforts in MINUSTAH, UNMIL, MONUSCO, AND UNMISS, in November 2013. AIDS-Free World was sent a copy of the report by an anonymous UN source, who feared that because it is highly critical of the UN Secretariat and troop contributing countries, the Expert Team’s Report would be quashed. Indeed, the annual report just submitted to you by the Secretary-General would appear to discount virtually the entire Expert Team’s Report.

We know that the UN has never disseminated the Expert Team’s Report. We therefore suspect that few if any governments are aware that independent experts, commissioned by the Secretary-General, made pointed criticisms about the way sexual violations in UN peacekeeping missions are handled. We are releasing the report today because we believe it contains valuable material that differs profoundly from the Secretary-General’s own annual report on progress. It should be seen by all the Member States of the United Nations.

1. Reported allegations vs. actual cases of sexual exploitation and abuse 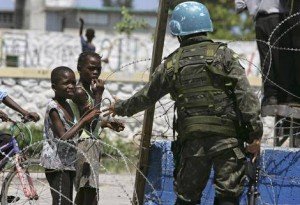 In his report to the General Assembly, the Secretary-General states that:
“For peacekeeping and special political missions, the total number of allegations received (51) is the lowest recorded since special measures for protection from sexual exploitation and abuse were first put in place and represents a decrease compared with 2013 (66).”[3]

However, the Expert Team reported to the Secretary-General that:
“The UN does not know how serious the problem of SEA [sexual exploitation and abuse] is because the official numbers mask what appears to be significant amounts of underreporting of SEA. There are a number of reasons why, and these include:

and that:
“UN personnel in all the missions we visited could point to numerous suspected or quite visible cases of SEA that are not being counted or investigated.”[5]

2. Concern for UN staff vs. concern for victims
Declaring the Organization’s concern for every victim, the Secretary-General introduces his report with the statement that he “remains fully conscious that a single substantiated case of sexual exploitation or sexual abuse involving United Nations personnel is one case too many.”[6]

3. Zero tolerance vs. impunity
Mr. Ban Ki-moon’s report assures Member States that: “The implementation of the Secretary-General’s zero-tolerance policy towards all forms of sexual exploitation and abuse by United Nations and related personnel remains a priority.”[8]

By contrast, the Expert Team reported to the Secretary-General that:
“[The] team heard numerous expressions of frustration that those who break the rules are not punished and that impunity is more norm than exception.”[9]

The Experts identified that two-part classification as a misleading over-simplification:  the Secretary-General’s annual tally of “unsubstantiated” allegations implies, incorrectly, that upon careful investigation, it is discovered that many UN personnel are falsely accused of sexual exploitation and abuse each year. In fact, a significant percentage of allegations are dismissed by the UN as “unsubstantiated” because the organization lacks the expertise, the trained personnel, and the will to conduct full and proper investigations in pursuit of justice for victims. The Expert Team Report concluded that:
“As it stands now, the two category system allows cases to be assumed false when they are in fact simply unsubstantiated due to lack of promptly or properly collected evidence.”[11]

5. Remedy vs. unremediated harm
The Secretary-General’s report asserts that:
“Zero tolerance must mean remediating the harm United Nations personnel have done to victims of sexual exploitation and abuse, and the children born of it.”[12]

Yet the Expert Team noted high tolerance for exploitation and abuse, and a culture of impunity, which has had the opposite effect:
“This impunity has been debilitating for the many UN personnel who believe in, adhere to, and try to promote the zero tolerance policy, and creates unremediated harm to its victims.”[13]

The Expert Team’s Report reveals many other deeply concerning assessments that contrast sharply with the UN’s annual accounts to Member States. In addition to the sample discrepancies above, this year’s report by the Secretary-General conveys steady, encouraging progress towards zero tolerance that is nowhere reflected in the Expert Team’s observations. It also contains several of the fatal flaws of previous years’ reports, among them:

A failure to name and shame those most responsible. Concerned Member States have long discussed the problem that when uniformed personnel accused of sexual exploitation or abuse are disciplined by their own militaries, in many cases, neither the UN nor the victims are apprised of the outcomes of those cases. Further, Member States remain unaware if and when particular Troop Contributing Countries’ peacekeepers are repeatedly accused of violations. In his 2012 report, the Secretary-General promised that his future annual reports would include country-specific data, and last year he reaffirmed his commitment to cite offending countries.[14] The promised data appears nowhere in this year’s report.

A persistent insinuation that the lion’s share of the blame for sexual exploitation and abuse rests with Troop Contributing Countries and their uniformed personnel. That was the case a decade ago. But currently, allegations of sexual exploitation and abuse are made against a lower percentage of military peacekeepers than UN civilian peacekeeping personnel who report ultimately to the Secretary-General.

The continued collection of “allegations,” a statistically meaningless indicator. The UN measures its progress toward zero tolerance by counting the number of ‘allegations’ reported each year and comparing that number with prior years. However, one allegation does not necessarily refer to an accusation against one perpetrator made by one claimant: a single allegation may involve more than one perpetrator and/or more than one victim. In fact, one allegation might involve ten perpetrators, or ten victims. And there is no consistency across the UN:  different departments and agencies define ‘allegation’ differently, with some recording an incident in which several staff are implicated as one allegation, and others recording one allegation for each individual involved. At year’s end, the total number of ‘allegations’ reported by the Secretary-General may bear no resemblance to the number of UN personnel who were engaged in sexual exploitation and abuse, nor to the number of people victimized. Hence, the total that year cannot legitimately be compared with the totals from other years. No reasonable statistician would use “allegations” thus defined as a valid basis for comparison.

Excellency, we trust that you will find the Expert Team report illuminating.

Reports:
Special measures for protection from sexual exploitation and sexual abuse, report of the Secretary
General of the United Nations, Feb 13, 2015 (32 pages)