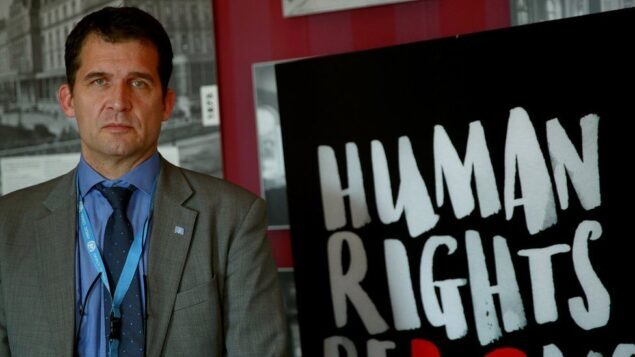 UN Special Rapporteur on torture Nils Melzer today welcomed a British court’s refusal to extradite Wikileaks founder Julian Assange to the United States on the basis that he would be exposed to “oppressive” conditions of imprisonment that would almost certainly cause him to commit suicide.

GENEVA (5 January 2021) – UN Special Rapporteur on torture Nils Melzer today welcomed a British court’s refusal to extradite Wikileaks founder Julian Assange to the United States on the basis that he would be exposed to “oppressive” conditions of imprisonment that would almost certainly cause him to commit suicide.

“This ruling confirms my own assessment that, in the United States, Mr. Assange would be exposed to conditions of detention, which are widely recognized to amount to torture or other cruel, inhuman or degrading treatment or punishment,” said Melzer.

Mr. Assange is currently being held in prolonged solitary confinement at Belmarsh Prison in London under a US extradition request for espionage and computer fraud. “If extradited to the United States, he faces a sentence of up to 175 years imprisonment under inhumane conditions of near total isolation,” Melzer said.

At the same time, the judgement on Monday sets an alarming precedent effectively denying investigative journalists the protection of press freedom and paving the way for their prosecution under charges of espionage. In 2010, Mr. Assange published sensitive military documents relating to the wars in Iraq and Afghanistan.

“I am gravely concerned that the judgement confirms the entire, very dangerous rationale underlying the US indictment, which effectively amounts to criminalizing national security journalism,” Melzer said.

The United States has announced it will appeal the judgment, but welcomed the judge’s dismissal of all arguments in defence of Assange based on press freedom, the public interest in the exposure of government misconduct, the prohibition of political offence extraditions, and the US failure to provide fair trials to national security defendants.

“This is of great concern,” said Melzer. “None of these questions will now be reviewed by the Appeals Court, as the only issue at stake will be Mr. Assange’s medical fitness to withstand US conditions of detention.

“Should the US provide assurances that Mr. Assange will be treated humanely, his extradition could potentially be confirmed on appeal without any meaningful review of the very serious legal concerns raised by this case.”

Melzer has repeatedly expressed in individual communications and statements that Mr. Assange has been subjected to more than 10 years of arbitrary detention and political persecution. During a visit conducted to Belmarsh Prison in 2019, Melzer and a specialized medical team found that Mr. Assange showed all the symptoms typical for prolonged exposure to psychological torture.

“The judgement fails to recognize that Mr. Assange’s deplorable state of health is the direct consequence of a decade of deliberate and systematic violation of his most fundamental human rights by the Governments of the United States, the United Kingdom, Sweden and Ecuador,” said Melzer.

According to the expert, the failure of the judgment to denounce and redress the persecution and torture of Mr. Assange, “leaves fully intact the intended intimidating effect on journalists and whistleblowers worldwide who may be tempted to publish secret evidence for war crimes, corruption and other government misconduct”.

“Mr. Assange must now be immediately set free, rehabilitated and compensated for the abuse and arbitrariness he has been exposed to,” said Melzer. “Even with a pending appeal, his continued isolation in a high security prison is completely unnecessary and disproportionate. There is no justification whatsoever for preventing him from awaiting the final judgment in a setting where he can recover his health and live a normal family and professional life.”

“Hopefully this judgement will put an end to the persecution and imprisonment of Mr. Julian Assange as an individual. But in the big picture it sets a devastating precedent severely undermining press freedom, accountability and the rule of law.”

Mr. Nils Melzer, Special Rapporteur on torture and other cruel, inhuman or degrading treatment or punishment

The Special Rapporteurs, Independent Experts and Working Groups are part of what is known as the Special Procedures of the Human Rights Council. Special Procedures, the largest body of independent experts in the UN Human Rights system, is the general name of the Council’s independent fact-finding and monitoring mechanisms that address either specific country situations or thematic issues in all parts of the world. Special Procedures’ experts work on a voluntary basis; they are not UN staff and do not receive a salary for their work. They are independent from any government or organization and serve in their individual capacity.

Concerned about the world we live in?

Then STAND UP for someone’s rights today.

and visit the web page at http://www.standup4humanrights.org