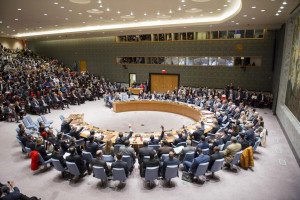 UNITED NATIONS –The United Nations Security Council on Friday unanimously approved a resolution endorsing an international road map for a Syria peace process, a rare show of unity among major powers on a conflict that has claimed more than a quarter million lives.

The resolution gives a UN blessing to a plan negotiated previously in Vienna that calls for a ceasefire, talks between the Syrian government and opposition, and a roughly two-year timeline to create a unity government and hold elections.

But the obstacles to ending the nearly five-year civil war remain daunting, with no side in the conflict able to secure a clear military victory. Despite their agreement, the major powers are bitterly divided on who may represent the opposition as well as on the future of Syrian President Bashar al-Assad. 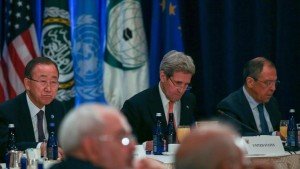 “This council is sending a clear message to all concerned that the time is now to stop the killing in Syria and lay the groundwork for a government that the long-suffering people of that battered land can support,” U.S. Secretary of State John Kerry told the 15-nation council after the vote.

The resolution also calls for the UN to present the council with options for monitoring a ceasefire within one month.

Talks between Syria’s government and opposition should begin in early January, the resolution said, though Kerry said mid-to-late January was more likely. It also endorsed the continued battle to defeat Islamic State militants who have seized large swaths of both Syria and neighboring Iraq.

It was one of the strongest appeals for peace by the council, divided for years on the issue of Syria’s war, since Russia and China began vetoing a series of Western-drafted resolutions on the conflict in October 2011.

The resolution came after Moscow and Washington clinched a deal on a text. The two powers have had very different views on what should happen in Syria, where Islamic State militants control considerable territory that Western governments suspect has been a launch pad for attacks on Western nations and Russia.

Kerry made clear that there were still differences on the future of Assad, a close ally of Russia and Iran who Western countries want ousted, as well as on the question of which Syrian opposition groups will have a seat at the table in talks with the government.

“We are under no illusions about the obstacles that exist,” Kerry said. “There obviously remain sharp differences within the international community, especially about the future of President Assad.”

The resolution does not address Assad’s fate.

Russian Foreign Minister Sergei Lavrov said of the resolution: “This is a clear response to attempts to impose a solution from the outside on Syrians on any issues, including those regarding its president.”

French Foreign Minister Laurent Fabius said the talks between the Syrian government and opposition would only succeed if there were credible guarantees on the departure of Assad. “How could this man unite a people that he has in part massacred?” Fabius said. “The idea that he could once again stand for elections is unacceptable to us.”

Syrian Ambassador Bashar Ja’afari said Assad’s government was prepared to take part in the talks in good faith. “I reiterate the readiness of the Syrian government to participate effectively on any sincere effort where the Syrians will determine their choices through dialogue under Syrian leadership and not foreign intervention,” he said, adding that all countries should coordinate with his government.

Agreement on a resolution came after a meeting of the so-called International Syria Support Group at New York’s Palace Hotel.

Foreign ministers from 17 countries, including Lavrov, Kerry and other European and Middle Eastern ministers, as well as top diplomats from regional rivals Turkey, Saudi Arabia and Iran, were in New York for the meetings.

During a break in Friday’s talks, Jordanian Foreign Minister Nasser Judeh said he had presented a document compiling the groups each country attending considered to be a “terrorist” organization. Kerry said other countries would help Jordan draw up a final list.

As with the question of Assad’s fate, diplomats say it will be extremely difficult to reach consensus on a list of terrorist groups to be excluded and legitimate members of an opposition who would participate in the negotiations.

The Syria road map, which also calls for a nationwide ceasefire that would not apply to Islamic State, Nusra Front and some other militant groups, was previously worked out in two rounds of ministerial talks in Vienna.

Diplomats said the main problem in the negotiations on the resolution involved Russian and Iranian concerns about how to refer to a bloc of opposition groups that would join UN-led peace talks with the Syrian government.

Western officials say a recent meeting in Saudi Arabia of opposition figures made significant headway in coming up with an opposition bloc, though Russia and Iran have questioned the legitimacy of the Saudi-hosted discussions.

In a dig at Saudi Arabia, Iranian Foreign Minister Mohammad Javad Zarif wrote in The Guardian on Friday that it was “utterly absurd that those who have denied their own population the most rudimentary tenets of democracy … are now self-declared champions of democracy in Syria.”

The Riyadh conference agreed to set up a 34-member secretariat to supervise peace talks, and that committee will also select the opposition’s negotiating team.

Earlier this week, diplomats [sic] said some progress had been made on the most difficult sticking point in the talks: Assad’s fate. They said Russia had indicated it had no problem with the eventual ouster of Assad at the end of a transition period, though it would not admit that publicly.

A special relationship: The United States is teaming up with Al Qaeda, again, by Alexander Cockburn, Harper’s Magazine, January 2016

Russia’s Putin says easy to work both with Assad and U.S. on Syria conflict

Putin: Russia ready to use ‘more military means’ in Syria if need be – agencies