MOSCOW–Ukraine’s armed forces have started massive tank shelling of positions of the militia of the self-proclaimed Donetsk People’s Republic (DPR) in the locality of Spartak from the direction of the city of Avdeyevka (the Donetsk Region) controlled by Ukrainian soldiers, the DPR Defense Ministry told the Donetsk News Agency. 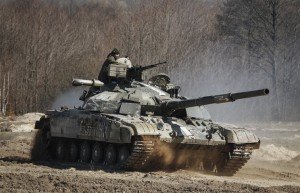 “Tanks are shelling Spartak from the direction of Avdeyevka. These are provocative actions on the part of the Ukrainian armed forces,” the ministry said.

The situation is controlled by the DPR armed forces, a ministry spokesman said.

Information on destruction, the death toll and the number of injured is being specified, he said.

Regular talks of the participants of the Trilateral Contact Group on the ceasfire in east Ukrainian comprising representatives of Russia, Ukraine and the Organization for Security and Cooperation in Europe (OSCE) were held in the Belarusian capital Minsk on February 10-12. Normandy Four (Russia, Ukraine, France and Germany) leaders also discussed the Ukrainian issue in Minsk then.

A 13-point Package of Measures on implementation of the September Minsk agreements was adopted at those talks.

The package in particular included an agreement on cessation of fire from February 15, withdrawal of heavy armaments, as well as measures on long-term political settlement of the situation in Ukraine, including enforcement of a special self-rule status for certain districts of the Donetsk and Lugansk regions.

Clashes between Ukrainian troops and local militias in the Donetsk and Lugansk regions during Kiev’s military operation, conducted since mid-April 2014, to regain control over parts of the breakaway territories, which call themselves the Donetsk and Lugansk People’s republics, have left thousands dead and forced hundreds of thousands of people to flee Ukraine’s embattled east.

The parties to the Ukrainian conflict mediated by the OSCE agreed on a ceasefire at talks on September 5, 2014 in Minsk two days after Russian President Vladimir Putin proposed his plan to settle the situation in the east of Ukraine. The ceasefire has reportedly been numerously violated since.

Ukraine’s parliament on September 16, 2014 adopted the law on a special self-rule status for certain districts in the Donetsk and Lugansk regions for three years. The law took effect October 18, 2014 but was then repealed by Kiev.

The Trilateral Contact Group adopted a memorandum on September 19, 2014 in Minsk. The document outlined the parameters for the implementation of commitments on the ceasefire in Ukraine laid down in the Minsk Protocol of September 5, 2014.

The nine-point memorandum in particular envisioned a ban on the use of all armaments and withdrawal of weapons with the calibers of over 100 millimeters to a distance of 15 kilometers from the contact line from each side. The OSCE was tasked with controlling the implementation of memorandum provisions.

The Contact Group’s meetings in late December 2014 and on January 31, 2015 did not bring major results and the Group had to meet again in February 2015.

​* * *
Spot report by OSCE Special Monitoring Mission to Ukraine (SMM): Renewed intensive fighting around Donetsk city and Shyrokyne, 12 April 2015 At 9.35hrs on 12 April, upon arrival at Donetsk railway station (“Donetsk People’s Republic” (“DPR”)-controlled, 8km north-west of Donetsk city centre), the SMM witnessed heavy fighting between “DPR” and the Ukrainian Armed Forces in areas near the city visible from its position. Both the Ukrainian Armed Forces representative and the Russian Federation representative to the Joint Centre for Control and Co-ordination (JCCC) told the SMM that the Ukrainian side (assessed to be the Right Sector volunteer battalion) earlier had made an offensive push through the line of contact towards Zhabunki (“DPR”-controlled, 14km west-north-west of Donetsk), but the SMM was not able to verify this.

The SMM observed that an intensive armed clash was underway with the use of tanks, heavy artillery, automatic grenade launchers, mortars, heavy machine-guns, and small arms and light weapons. From its arrival at 9.35 to 15:00hrs, the SMM observed and recorded 1,166 explosions, caused mainly by artillery and mortar shell strikes. The SMM assessed that weapons with a calibre larger than 100mm were used by both sides during the fighting.

The SMM was in contact with the JCCC throughout the day and was informed that the JCCC attempted several times to mediate observation of the ceasefire, but was unsuccessful. Fighting was on-going at the time of the submission of this spot report from the field at 18:12hrs.

Also on 12 April, from an observation point located in the eastern outskirts of Berdianske (government-controlled, 19km east of Mariupol, 1.5km west of Shyrokyne) between 17:45 and 18:00hrs, the SMM heard 25 incoming mortar rounds it assessed were fired from “DPR” positions in the east, impacting one kilometre north of the SMM’s position, on Ukrainian Armed Forces positions in western Shyrokyne. Between 18:00 and 18:25hrs, the SMM heard another 24 incoming mortar rounds impacting two kilometres from its position, near the E58 road. From 18:05 to 18:25hrs, the SMM observed 30 mortar rounds fired from a Ukrainian Armed Forces position along the Sea of Azov coast in southern Berdianske, 400m south-east of the SMM’s position. Following a lull until 18:50hrs, “DPR” artillery from the north-north-east targeted these Ukrainian Armed Forces positions with salvos, probably 122mm howitzers. The SMM observed splashes in the Sea of Azov. The SMM departed at 19:00hrs but continued to hear artillery fire. The artillery fire was heard and shook buildings across Mariupol; it ended at 20:25hrs.

On 12 April, the SMM was repeatedly denied access to the village of Shyrokyne.

[end report]
Editors’ Note: While we don’t necessarily share the views we publish on New Cold War, we do attempt to provide readers with a range of views. This is because your right to make your own mind up depends on your being fully informed.
Share
Tweet
Share
Pin