Soldiers of the 2nd Battalion, 17th Tank Brigade of the UAF have announced they will not follow their commanders’ orders in a video address to President Petro Poroshenko. 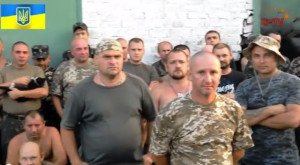 The tankers called on the president to deal with “the anarchy which is unfolding in the army”, stating that over the course of the year their unit was never rotated, and when the brigade commander decided he had enough, “he simply shrugged his shoulders and went on leave,” RIA Novosti reports.

The soldiers also complained about their shoddy equipment. “Look at how we are dressed. We’re look like the homeless,” the soldiers said, noting that the only support they receive comes from volunteers. “If even in March some 50% of us would have been willing to remain in service, now it’s 0%,” the soldiers said.

The sixth wave of Ukrainian mobilization [conscription] started in June. The Ukrainian authorities are planning to induct 100-150,000 people into the military. On March 25, Poroshenko signed an order to increase the armed forces’ size to 250,000. However, mobilizations invariably encounter young men’s mass refusals to serve. Evasion, including through emigration (there are 1.2 million Ukrainians of military age in Russia) is now a widespread phenomenon. Kiev has reacted by increasing penalties for evading service, which now include severe jail terms.

Translator J.Hawk’s comment: The conflict in the East has come to resemble the “phony war” of 1939/early 1940 which proved extremely demoralizing for the French military. Ironically, the French Army would have probably performed much better in October or November of 1939, when the soldiers were freshly mobilized and still full of patriotic ardor. But the utterly pointless sitting in the trenches and Maginot Line fortifications through the Winter and Spring of 1940, the absence of training, and the separation from families gravely weakened French morale.

We’re seeing something very similar happen to the Ukrainian Armed Forces. Fighting is what kept it together. The war gave it a sense of purpose and even provided a certain morale boost, especially to those who convinced themselves they were holding off The Entire Russian Army. The Debaltsevo debacle in February 2015 dented that morale but not critically–UAF brigades did not simply “go home”. Moreover, that morale could have been restored were the ceasefire accompanied by serious training and equipment modernization. Neither of those materialized. By all accounts, today’s UAF is a far weaker force than at the end of the winter campaign.