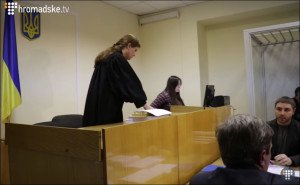 The Prosecutor General Office of Ukraine has charged a commander and two members of the special Berkut company with killing not 39 but 48 out of 49 protesters during the Maidan massacre on February 20, 2014. The sole exception is apparently a Georgian protester. Exact circumstances and location of his death are still not confirmed. The Berkut policemen are also charged with terrorism for the Maidan massacre.

The new charges are made in spite of results of forensic medical and ballistic reports, videos, and testimonies of several dozen protesters that were presented in my APSA paper and revealed during the ongoing Maidan massacre trial of the two other Berkut members. All this evidence shows that least the absolute majority of the 49 protesters were killed from the Hotel Ukraina and other Maidan-controlled buildings.

The new charges mean that the investigation now denies not only all such evidence of snipers in these locations but also its own findings revealed in a Council of Europe report. This report stated that that the investigation by the Prosecutor General Office of Ukraine had evidence that at least three protesters were killed from the Hotel Ukraina and that at least 10 other protesters were killed from rooftops.

Forensic medical reports made public during the trial confirmed that the absolute majority of the protesters were killed from steep or relatively large angles, i.e. from nearby buildings, and from directions of Maidan-controlled locations. Specifically, at least 12 protesters out of 21, whose cases were already examined during the trial, had wounds at significant angles, three protesters were shot from nearly horizontal positions, while specific directions of the wounds have not been revealed in the cases of six protesters. The Berkut policemen were positioned at nearly horizontal levels with killed protesters.

The evidence revealed during the Maidan massacre trial also indicated that even protesters killed from nearly horizontal positions were also shot from Maidan-controlled areas. It is impossible for top investigators to systematically and deliberately ignore all this and other similar evidence of “snipers” in the Maidan-controlled buildings by mistake. The new charges provide another indication that the investigation of the Maidan massacre is falsified for political reasons because of the orders from the top.

The five minute, Ukrainian television news broadcast to which the above commentary responds is here.