The Simon Wiesenthal Center has condemned Ukraine’s recognition of the group as well as a second bill that equated communist and Nazi crimes. Seventy years after the end of the Holocaust, Ukraine’s parliament has extended official recognition to a nationalist militia that collaborated with the Germans during the Second World War. 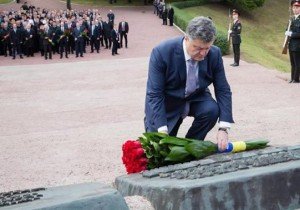 According to a bill passed on Thursday [April 9], the Ukrainian Insurgent Army, an ultra-nationalist faction that sought to establish an independent Ukrainian state, would be eligible for official government commemoration, according to the Kiev Post.

While the group, an offshoot of the Organization of Ukrainian Nationalists, engaged in warfare against both the Soviet Union and the Nazis, it also collaborated with Germany and took part in actions against local Jews.

The Simon Wiesenthal Center condemned Ukraine’s recognition of the group as well as a second bill that equated Communist and Nazi crimes.

“The passage of a ban on Nazism and Communism equates the most genocidal regime in human history with the regime which liberated Auschwitz and helped end the reign of terror of the Third Reich,” said Wiesenthal Center director for Eastern European Affairs Dr. Efraim Zuroff.

“In the same spirit the decision to honor local Nazi collaborators and grant them special benefits turns Hitler’s henchmen into heroes despite their active and zealous participation in the mass murder of innocent Jews. These attempts to rewrite history, which are prevalent throughout post-Communist Eastern Europe, can never erase the crimes committed by Nazi collaborators in these countries, and only proves that they clearly lack the Western values which they claim to have embraced upon their transition to democracy,” he added.

This is not the first time that the wartime Ukrainian nationalist movement, led by Stepan Bandera, has been the center of controversy there.

In 2010, then-President Viktor Yushchenko declared Bandera a hero of Ukraine in a decision that was subsequently rescinded by his successor Viktor Yanukovych a year later.

The issue of Nazism has been central to the recent Ukrainian-Russian conflict, with Moscow accusing the administration in Kiev of neo-Nazi and fascist tendencies.

Ukraine has made efforts to deflect such criticism and in January its Foreign Ministry announced that it was planning on appointing a special envoy tasked with preventing and combating anti-Semitism and xenophobia.

The most recent anti-Semitic incident in the country occurred last month when a group of masked men yelling racist slurs beat a Jewish surgeon in Kharkov.

And while a series of anti-Semitic attacks during the 2013- 14 Maidan Revolution put communities around Ukraine on edge, violence against Jews has not been a large concern over the past year, especially when compared to the war raging between government troops and separatists in the east, residents say.

Following the revolution [sic], the Svoboda party, a neo-Nazi faction with significant parliamentary support, lost most of its mandates, sidelining the far Right in the political sphere, even as extreme nationalists found a place among the volunteer battalions in combat against Russian-backed separatists in the Donetsk region.

While Jewish worries over anti-Semitism have been on the back burner due to the war, several recent developments have shown that antipathy toward Jews, or at least indifference toward such attitudes when held by important military or political figures, still exists in Ukraine.

Last November, Jewish organizations expressed their displeasure when it was disclosed that the newly appointed police chief for the Ukrainian province in which Kiev is located came under fire after it was alleged that he had past ties with a neo-Nazi organization.

Meanwhile, last week local media reported that the leader of a far Right nationalist movement, Right Sector, that assembled the bulk of the fighters involved in the 2013 Ukrainian revolution will now advise the head of his country’s armed forces.