Faced with losing a cherished entry of nationalist Ukraine into the visa-free ‘Schengen’ travel zone of the European Union, deputies of the Verkhovna Rada in Kyiv reversed an earlier temper tantrum and voted on November 12 in favour of a resolution to respect, on paper, the rights of people of gay, lesbian and transgender sexual orientation in workplaces.

The resolution was an amendment to a proposed, new anti-union labour code for Ukraine. The amendment addressed a range of worker rights. The European Union warned that if the new code did not include the figleaf of recognizing LGBT and other rights for workers, this would trigger a refusal of Ukraine’s application to join the Schengen zone.

To gain approval on November 12, five rounds of voting were required, according to LB.ua. In the first four votes, the amendment was rejected. After a recess ordered by Rada speaker Vladimir Groisman, deputies returned and voted 234 in favour. The list of how deputies voted can be found at this link.

During the first round of consideration of the new labour code on November 5, the proposed code was adopted but the LGBT amendment was rejected. That triggered alarm bells in European and North American capitals.

The approved amendment prohibits discrimination of LGBT-oriented people and others in employment. It prohibits the direct or indirect restriction of the rights of employees based on “race, colour, political, religious and other beliefs, sex, gender identity, sexual orientation, ethnic, social and foreign origin, age, health, disability, or suspected presence of HIV/AIDS, family and property status, family responsibilities, place of residence, or participation in a strike”. Other prohibited discrimination against employees includes past or intended court actions to protect rights, language and other grounds not related to the nature of the work.

Although the new labour code is widely viewed by unions in Ukraine and internationally as a deep attack on worker and trade union rights, the EU has only been narrowly concerned with the optics of the Rada’s specific refusal to include, on paper, recognition of LGBT rights.

Documentary film ‘This Is Gay Propaganda’

Coincidentally, a new documentary film on the rights of gay, lesbian and trans-gendered people in Ukraine is making the film circuit rounds internationally. It is produced and directed by a Canadian, Marusya Borciurkiw, and is titled ‘This Is Gay Propaganda’. The world premiere of the film took place in Vancouver, Canada in August 2015.

The film provides some insight into the difficult conditions of life for LGBT people in today’s Ukraine, but it is largely a propaganda effort directed against the people’s republics of Donetsk and Lugansk and the Russian Federation. A promotional article for the film reads, in part:

You’ve probably heard of Ukraine’s Euromaidan revolution. You may not be aware that LGBT activists played a significant role in this uprising. This groundbreaking film follows the progress of the Euromaidan revolution and the Russian occupation that followed from the perspective of LGBT Ukrainians. The film’s director, a queer Canadian of Ukrainian descent, travelled to three Ukrainian cities in 2014, tracking the impact of Russia’s “gay propaganda law” in Russian-occupied regions of Ukraine. Meet Alexandra, whose face was on a “Wanted” poster plastered across the city of Donetsk; Vlad, a gay activist hiding out in an LGBT safe house in Kyiv; Olena, who taught women’s self- defence classes during Euromaidan and now fights the spread of anti-gay laws in Eastern Europe. From harrowing accounts of exile and torture, to stories of creative resistance, this film shows a side of the conflict in Ukraine the world has not yet seen.

Marusya Borciurkiw is the sister of Michael Borciurkiw, the Canadian of Ukrainian origin who heads the Special Monitoring Mission for Ukraine of the Organization for Security and Cooperation in Europe (OSCE). The filmmaker visited Ukraine in 2014 for the first time in her life. The film has not screened in Ukraine. Last year, a cinema in Kyiv that was screening a festival of films concerning LGBT rights was burned to the ground. The fire was set during one of the film screenings. 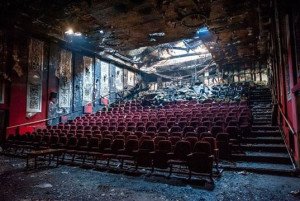 The new film has a curious conclusion in which it cites the holding of a Gay Pride Day celebration in Kyiv on June 6, 2015 as being an example of new freedoms in Euromaidan Ukraine. But that event was banned by the city’s mayor and courts. It was eventually held on the outskirts of the city. It lasted only a few minutes when right-wing vigilantes violently broke it up. Police that were present failed to prevent the vigilante action, though they did detain a few of the attackers.

In July of this year, a gay couple was attacked by a small far-right mob in Kyiv after they decided to test public tolerance by holding hands while sitting on a park bench. The couple did encounter tolerance, including people who drove their attackers away. In August, a court in Odessa upheld the banning of a planned gay rights event in that city.

Street and judicial vigilante actions against social protests are common in Euromaidan Ukraine. The country’s economic, political and social conditions have deteriorated sharply since the overthrow of the elected president of the country in February 2014, part of the turn of the country’s elite to an economic association agreement with the European Union.

Elton John urges Ukraine to ‘wake up’ over gay rights, The Independent, Sept 12, 2015

Ukraine’s parliament has passed a law banning discrimination in the workplace, including that based on sexual orientation.*

It is the last of a package of ten laws that had to be approved for the European Union to consider visa-free travel for Ukrainians. Several previous attempts to get the bill through parliament failed over fears it would lead to the introduction of same-sex marriage in Ukraine. The decision was supported by 234 MPs.

The speaker of parliament assured deputies that the law would not threaten “family values”, saying: “I hear some fake information which says that there may be same-sex marriages in Ukraine. God forbid, this will ever happen. We will never support this.”

In response to the vote, Ukrainian president Petro Poroshenko tweeted: “Ukraine is breaking free from the shackles of discrimination from the Soviet past. Meanwhile, family values remain inviolable.”

EU officials will meet in two weeks to decide whether the conditions for extending visa-free status to Ukrainian nationals have been met.

* The measure is an amendment to a proposed, new, anti-union labour. The code was approved in a first reading on Nov 5, 2015. A final reading and approval is required before the code passes into law.–New Cold War.org editor 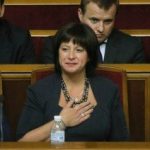 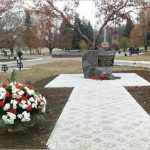