Vigilantes of the Right Sector and other right-wing groups in Ukraine have erected a blockade of the main road connecting Ukraine to Crimea. The blockade went up on Sept 20 and is located near the Ukrainian border town of Chongar.

Traffic between Ukraine and Crimea consists of visitors from the two countries with family ties or other connections, small numbers of tourists and commercial traffic. The latter consists particularly of trade in food goods. The blockade is aimed in particular at stopping the trade in food.

The right-wing activists have said they will allow pedestrians and automobiles to cross. Sputnik reports, “The [Russian] border agency added that the Russian side of the border is working normally. Light vehicles and pedestrians continue to pass unobstructed from the Ukrainian side.

Many Ukrainians have fled to Crimea to avoid the military draft, political repression or the violence of the civil war raging in the country.

Hundreds of trucks are sitting idle on both sides of the border. “Right now there are about three hundred people on the road near the Chongar settlement,” 112.ua reported on Sunday. “More people are arriving by car and by buses,” the channel said.

“Not a single truck is in sight as drivers were recommended to move further from the border for the night.”

Local authorities in Chongar have assisted in providing a tent encampment as well as food and water for the vigilantes.

The Autonomous Republic of Crimea was founded at the time of Ukraine’s secession from the Soviet Union in 1991, but it never won the full powers that the Crimean population fought to obtain. It was, for example, an officially unilingual territory in which only the Ukrainian language has the full protection of law. Following the March 2014 referendum, Ukrainian, Tatar and Russian became the official languages.

According to a report on Novorossiya Today, Crimea and Russia had already taken steps to prepare for a blockade of food trade. Russian Deputy Prime Minister Dmitry Kozak told reporters on Monday that no marked worsening of the food situation in Crimea is expected in connection with blocking of the truck deliveries from the Ukrainian territory to the peninsula.

“The blockade that has existed for a day has not considerably worsened the situation because the initiators announced it in advance, three weeks ago. We have made the corresponding preparations.

“Russia’s regions have been providing assistance to the Republic of Crimea starting from last April. They have ensured food supplies to the corresponding retail networks.” Kozak also said no food price hikes are expected.

SErgei Aksyonov, the prime minister of the Republic of Crimea, told Russian television news channel Russia 24, “This approach will result in Ukrainian goods being pushed out of Crimea’s market completely within the course of two weeks. This action seems to be directed primarily against the citizens of Ukraine, who live in the regions of Kherson and Mykolaiv. Crimea will calmly live through it.”

Among those supporting and joining the right-wing protest are Mustafa Dzhemilev and Refat Chubarov. They are older Crimea Tatars who sit as appointed members of the Ukrainian Rada. 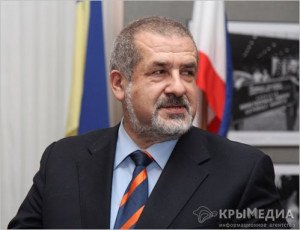 Under Ukraine’s electoral system, approximately half the seats in the Rada are filled by appointments by electoral parties or machines, proportional to the number of votes they receive. Dzhemilev and Chubarov were appointed by the ‘Poroshenko Bloc’.

Western media is having another field day of misrepresenting the situation in Crimea as a result of the road blockade. Reuters, for example, reports, “The majority of the Crimean Tatars, a Muslim people who are indigenous to the Black Sea territory and number about 300,000 in the peninsula’s population of two million, opposed the Russian annexation in March 2014, which followed the overthrow of a Moscow-backed president in Kiev.”

The New York Times calls the food blockade a “Tatar blockade” and chooses not to report that the action is an initiative of the extreme-right of Ukraine.

The claims by Reuters and the Times are utterly false and inaccurate. For the past 18 months, the entirety of Western media has declined to report the numerous polls of Crimean people showing high rates of satisfaction with the decision to secede from Ukraine, including among Tatars.

For example, the German polling firm GfK published the results of a survey it conducted in January of this year reporting that 93 per cent of Crimeans “fully endorse” or “mostly endorse” Crimea’s decision to secede from Ukraine. That survey was funded by the Canadian government.

Another survey whose results were published in March of this year was commissioned by John O’Loughlin, College Professor of Distinction and Professor of Geography at the University of Colorado in Boulder, and Gerard Toal (Gearóid Ó Tuathail), Professor of Government and International Affairs at Virginia Tech’s National Capital Region campus. Their survey included questions to Crimean Tatars.

Road and rail connection between Crimea and Russia under construction

Construction is underway of a road and rail bridge from the Taman Peninsula of Russia to Crimea across the narrow Kerch Strait. The strait connects the Sea of Azov to the Black Sea. An electricity cable connection is also under construction. 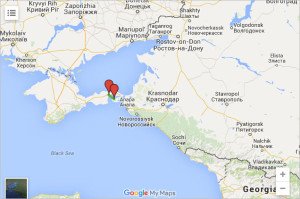 The bridge will be app. 5 km long and is located 100 km west of the Russian city of Krasnodar. That city is app. 200 km south of the Russian port city of Rostov-On-Don and the Ukrainian port city of Mariupol, both of which are located on the Sea of Azov. Mariupol is located in Donetsk region, just west of the demarcation line set by the Minsk-2 ceasefire agreement of Feb. 12, 2015. That line cuts the historic Donetsk and Lugansk regions in two.

Presently, rail cars, autos and passengers between Russia and Crimea make the Kerch Strait crossing by ferry. Crossings are frequently cancelled or delayed by rough weather, especially during winter.

There is frequent air service between Crimea and Russia. Prices are subsidized by the Russian government.

Russia is also building a new stretch of double-track railway to Rostov-On-Don through the Voronezh and Rostov regions in the west of the country. The new line will completely bypass Ukraine. Presently, a portion of the north-south route connecting Russia to these two regions passes through Lugansk region of Ukraine. The new railway will be completed by 2018.

Prior to the launching last year by Kyiv of a civil war in eastern Ukraine, the border between Russia and Ukraine was friendly and easy to cross. The Kyiv regime that came to power last year has militarized the part of the border it still controls, including building fencing for the first time. The regime says it wants to build a wall but it lacks the funds to do so.

There are two large losers from this blockade of Crimea. One are the agricultural producers of Ukraine. They’ve already lost very important markets in Russia. Now they are losing markets in Crimea. The other group is the Ukrainian population as a whole. In this case concerning Crimea and for much of the past 18 months, the foreign policy of Ukraine is driven by right-wing vigilantism instead of reasoned political debate and decision.

There is a full archive of articles on Crimea on the New Cold War.org website, here. 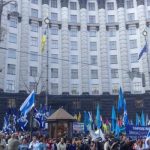 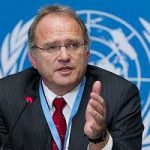