Kyiv journalist Alexander Bondarchyuk is imprisoned for two months for “the wrong understanding of the conflict in Donbas” and daring to propose that property of the oligarchs be nationalized.

The Kiev Court of Appeals has refused to alter the 60-day detention of Alexander Bondarchyuk, the leader of the opposition Workers’ Party of Ukraine and editor-in-chief of the newspaper The Working Class. 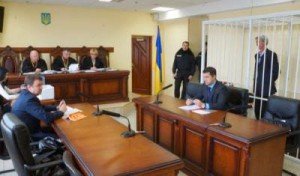 Courtroom appeal on March 27, 2015 by Alexander Bondarchyuk against his arrest and detention

The politician and journalist was arrested on March 18 under paragraph 1, article 110 of the Criminal Code of Ukraine, “Violation of territorial integrity and inviolability of Ukraine”. He was accused of publishing two articles in his newspaper which the SBU [secret police of Ukraine] considered to be a threat to the territorial integrity of Ukraine. Supporters of the defendant appeared in the courtroom, including fellow party members, leaders of PSPU (Progressive Socialist Party of Ukraine)–Natalia Vitrenko and Vladimir Marchenko—and activists of the Communist party, of which previously Bondarchyuk was a member.

Alexander Bondarchyuk was an elected deputy of the Verkhovna Rada (Parliament) during the 1990’s and early 2000’s, specifically the third (1998) and fourth (2002) convocations of the Rada. 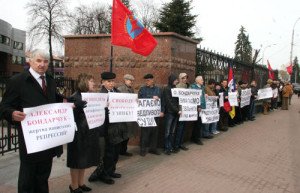 At the moment, PolitNavigator is unable to find in open sources the printed materials for whose distribution the editor of the The Working Class is blamed because its website is blocked. In court, the lawyer of the opposition activist cited an expert’s conclusion about the basis on which the SBU investigator requested the arrest. These included, “Calls to transfer the enterprises of the oligarchs into state ownership, to nationalize enterprises, to nationalize the land, to start the eradication of corruption and bureaucracy and not to ignore the socio-economic interests of the people.”

The expert also reported, “Other materials contain indirect call for the establishment of statehood and independence of Novorossia. These materials, firstly, contain no direct appeals to change state borders, and, secondly, contain slogans that are inherent in the Communist or post-Communist ideology.”

The lawyer also said that his client, as a journalist and opposition politician, enjoys the rights provided for in the article 34 of the Constitution of Ukraine and article 10 of the European Convention for the protection of human rights and fundamental freedoms.

For his part, the defendant emphasized that he has his own beliefs that he plans to defend in court.

“I want to prove in court that I used my constitutional right that is guaranteed to me by article 34 of the Constitution of Ukraine,” said Bondarchyuk. “I also want the trial to be held and I am not going to destroy any evidence. The investigator has everything. I do not deny the collected evidence and facts. Yes, I am the editor of this newspaper. Yes, I have selected the material and posted it, knowing that it will spread.”

The presiding judge asked him, “When you viewed this article as the editor, why did you not discuss with the staff to not publish it and go to the members of the National Guard to ask what they are doing [in eastern Ukraine]?”

“Please tell me, what caused the need to print this article so suddenly, immediately, without discussion?”

The defendant replied that he has his own understanding of the conflict in Donbas. “In order to preserve the territorial integrity of Ukraine, we must understand all the circumstances, all parties, all the essence of this conflict,” he said.

The judge dismissed Bondarchyuk’s appeal and upheld the arrest and detention of the opposition leader for 60 days. Those present in the courtroom met the court’s decision with chants [of] “Shame!” 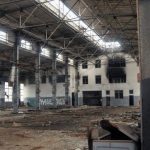