By Ukrainian Committee of Soldiers’ Mothers, translated to English by J Hawk for Fort Russ, March 17, 2015

The Ukrainian Committee of Soldiers’ Mothers, a non-governmental organization, has published a list of the names of casualties suffered by Ukrainian armed forces (including those of paramilitary battalions) during the course of the so-called Anti-Terrorist Operation by the Kyiv government.

The three lists are dated February 2015 and early March 2015. The numbers are as follows:

The missing are presumably deserters, prisoners taken by Novorossia, or soldiers who were killed but whose remains were either not recovered or not identified.

The low number of wounded soldiers seems odd, but it may be only the number of those wounded severely enough to require hospitalization and/or evacuation. Light wounds could be treated by brigade medical personnel without the casualty becoming officially or unofficially reported. What’s more, soldiers may be concealing wounds so as not to inflict additional stress on friends or families. 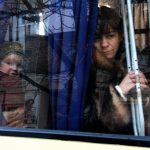 One million from eastern Ukraine have taken refuge in RussiaDigest, Ukraine