MOSCOW–The Ukrainian armed forces over the past week have redeployed to the contact line in the southeast of the country 277 tanks and heavy artillery pieces, spokesman for the Defense Ministry of the Donetsk People’s Republic (DPR), Eduard Basurin, reported today. 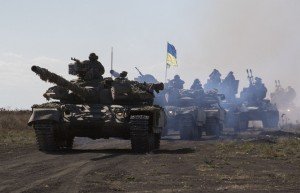 “The Donetsk republic’s reconnaissance units continue to fix the movement and concentration of military hardware along the entire contact line and violation by the Ukrainian side of the Minsk agreements on the withdrawal of heavy weapons,” Basurin is quoted by the Donetsk news agency.

According to Basurin, the Ukrainian forces over the past week have moved military hardware to the separation line in various settlements in the areas of the cities of Gorlovka, Mariupol and Donetsk. The Ukrainian armed forces have concentrated at the contact line a total of 111 artillery pieces (including self-propelled artillery weapons, the BM-21 Grad multiple launch rocket systems (MLRS), D-30 systems, 166 tanks, 147 infantry fighting vehicles and armoured personnel carriers, 26 vehicles with ammunition and more than 660 troops, including members of the Ukrainian extremist organisation Right Sector, whose activity is banned in Russia.

“The military-political leadership of Ukraine, taking advantage of the ceasefire regime, is actively building up forces and redeploying the troops all along the contact line,” Basurin added.

Basurin said earlier on Monday that the Ukrainian armed forces opened fire 91 times over the past week against DPR territory. The shelling attacks were launched from mortars and tank weapons, he said. “I would like to draw the attention to the fact that over the past week, the Ukrainian forces have 91 times violated the ceasefire regime,” the Donetsk news agency quoted him as saying.

According to Basurin, about 370 mortar rounds of 82 mm and 120 mm calibre were fired on the DPR settlements and positions. “All the data on the violations were handed over to JCCC (the Joint Centre for Control and Coordination of the ceasefire regime in the east of Ukraine) and the OSCE Mission,” the DPR Defence Ministry official said.

The DPR Defense Ministry reported earlier on Monday that the Ukrainian forces have violated the ceasefire regime in DPR nine times over the past day.

The Trilateral Contact Group on Ukraine comprising senior representatives from Russia, Ukraine and the European security watchdog OSCE signed a 13-point Package of Measures on February 12, 2015 to fulfil the earlier Minsk agreements of September 2014. The package was agreed by the leaders of the Normandy Four, namely Russia, Germany, France and Ukraine.

The Package of Measures, known as Minsk-2, envisaged a ceasefire between Ukrainian government forces and the people’s militias of the republics in Donetsk and Luhansk beginning February 15, 2015. A subsequent withdrawal of heavy weapons from the line of engagement was to follow.