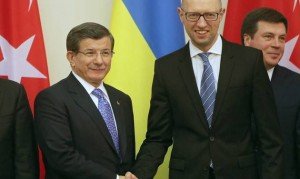 The Turkish Prime Minister, Ahmet Davutoglu visited Kiev at the beginning of this week. His visit showed that Turkey intends to continue its confrontation policy toward Russia. He stated:

If Russia continues to act like a terror organization and force civilians to abandon their homes, it will face our ultimate response.

There is a danger that the Russian-Turkish confrontation will not end with Syria but could grow into something more global. Or course, ‘global’ in the case of Turkey would be limited to the Middle East and the countries of the Black Sea basin, plus the Turkic-speaking countries.

Russia needs to pay attention to the Black Sea basin because Davutoglu mentioned this region in his statement. I quote:

Russia’s new policy is to keep up its expansionism and aggression. The situation initiated in Abkhazia continues in the Crimea. Now there are three countries whose territorial integrity has been broken by Russia: Georgia, the Ukraine and Syria.

This statement by Davutoglu shows a desire to restore the former geopolitical matrix of the Ottoman Empire – to consider the territories around the Black Sea as an area of interests.

The matrix of the Ottoman Empire was not destroyed: it was alienated as a result of the Turkish defeat in the World War I and the implementation of Westernizing reforms and Turkish nationalism by Ataturk. Two hundred years ago, the Turks had unchallenged power over the Black Sea region and Russia was its major enemy and rival until the collapse of the Ottoman Empire. By the way, the original Novorossiya was formed as a result of Russian-Turkish wars in the Black Sea region 250 years ago.

Of course, the restoration of the Ottoman Empire in one form or another is out of the question. Turkish authorities aren’t thinking about that now. The point is that Erdogan’s Turkey wants to protect and patronize the territories that once formed a part of the Ottoman Empire.

If Russia supposedly threatens the national security of these countries, Turkey will protect them. Anti-Russian Ukraine is a key Turkish ally in its opposition to ‘Russian expansion’ in the Black Sea region.

At the same time, Ukraine is weaker than Turkey, considering both its economic and military potential. That’s why it cannot be an equal union: Ankara will lead, and the Ukraine will be led, a matrix that corresponds to the former Turkish-Ukrainian relations of suzerain and vassal, as under the Ottoman Empire.

In the 1990’s and 2000’s, Turkey was not particularly interested in Ukraine and Crimea. Tthe Turkish President didn’t even visit Tbilisi in support of Saakashvili during the War of August 2008, as did the presidents of Ukraine, Poland and the Baltic countries. Now the situation is totally different: Turkey treats Ukraine as a territory that stands up to Russia.

Turkish foreign policy in the Black Sea is becoming aggressively anti-Russian. Davutoglu said in Kyiv that Turkey does not consider Crimea to be Russian. “For us, Crimea is a fundamental part of the territorial integrity and independence of Ukraine.”

… The enemy of my enemy is my friend—thus is the issue of Ankara-Kiev relations decided.

Alexander Chalenko is a well known Ukrainian journalist who emigrated to Russia after the Maidan putsch.