It’s easy to see why Representative John Conyers, a Michigan Democrat, would have a problem with the military unit commanded by Ukrainian legislator Andriy Biletsky: Conyers is a founding member of the Congressional Black Caucus, Biletsky is a white supremacist.

Andriy Biletsky, of Azov Battalion and member of Ukrainian Parliament

The House of Representatives has unanimously approved an amendment to the U.S. military budget, proposed by Conyers and Florida Republican Ted Yoho, banning support and training for “the Ukrainian neo-Nazi paramilitary militia ‘Azov Battalion.'” Azov was set up in May 2014 to fight pro-Russian separatists in eastern Ukraine. Here’s how the group’s Facebook page describes the circumstances:

In the first weeks after the Putin invasion of Donbass began, the authorities and law enforcers were confused and demoralized. Nationalists had to take initiative. The Patriot of Ukraine organization and allied unofficial groups of right-wing youth rallied around Andriy Biletsky and challenged the separatists.

By now, though, the Azov Battalion has become a regiment of the Ukrainian National Guard and enjoys the enthusiastic support of Interior Minister Arsen Avakov.

Biletsky had run Patriot of Ukraine since 2005. In a 2010 interview he described the organization as nationalist “storm troops” with its biggest unit in Kharkov, Biletsky’s native city in eastern Ukraine. The group’s ideology was “social nationalism” — a term Biletsky, a historian, knew would deceive no one.

The main targets for Biletsky and his organization’s hostility were immigrants in Kharkiv and the capital Kiev, both of which are relatively cosmopolitan cities. In 2007, Biletsky railed against a government decision to introduce fines for racist remarks:

So why the ‘Negro-love’ on a legislative level? They want to break everyone who has risen to defend themselves, their family, their right to be masters of their own land! They want to destroy the Nation’s biological resistance to everything alien and do to us what happened to Old Europe, where the immigrant hordes are a nightmare for the French, Germans and Belgians, where cities are ‘blackening’ fast and crime and the drug trade are invading even the remotest corners.

Such expressions of hatred would be beyond the pale even for the European far right. Biletsky landed in prison in 2011, after his organization took part in a series of shootouts and fights. Following Ukraine’s so-called revolution of dignity last year, he was freed as a political prisoner; right-wing organizations, with their paramilitary training, played an important part in the violent phase of the uprising against former President Viktor Yanukovych. The new authorities — which included the ultra-nationalist party Svoboda — wanted to show their gratitude.

The war in the east gave Biletsky’s storm troopers a chance at a higher status than they could ever have hoped to achieve. They fought fiercely, and last fall, the 400-strong Azov Battalion became part of the National Guard, receiving permission to expand to 2,000 fighters and gaining access to heavy weaponry. So what if some of its members had Nazi symbols tattooed on their bodies and the unit’s banner bore the Wolfsangel, used widely by the Nazis during World War II? In an interview with Ukraine’s Focus magazine last September, Avakov, responsible for the National Guard, was protective of his heroes. He said of the Wolfsangel:

In many European cities it is part of the city emblem. Yes, most of the guys who assembled in Azov have a particular worldview. But who told you you could judge them? Don’t forget what the Azov Battalion did for the country. Remember the liberation of Mariupol, the fighting at Ilovaysk, the latest attacks near the Sea of Azov. May God allow anyone who criticizes them to do 10 percent of what they’ve done. And anyone who’s  going to tell me that these guys preach Nazi views, wear the swastika and so on, are bare-faced liars and fools.

Two months later, Biletsky was a member of parliament. In that election, far-right parties failed to draw enough votes to make it into the national legislature, but individuals such as Biletsky did. He ran for office in a middle-class constituency of Kiev, on this program: “Strong nation! Honest authorities! A mighty country!” That was enough to win him more than 30,000 votes.

This year, when the U.S. sent military trainers to western Ukraine to help the National Guard, Avakov said Azov would be among the first units to take part in the Fearless Guardian exercise, but the U.S. insisted the unit be left out.

Now, Conyers and Yoho have almost succeeded in making Azov ineligible for any form of U.S. assistance. “These groups run counter to American values,” Conyers told Congress. “And once the fighting ends, they pose a significant threat to the Ukrainian government and the Ukrainian people. As we’ve seen many times, most notably within the Mujaheddin in Afghanistan, these groups will not lay down their arms once the conflict is over.”

That is a reasonable assumption, given that Biletsky’s organization was training to fight well before the war started. Ukrainian President Petro Poroshenko should take note of Conyers’ view, as well as of Western calls for the repeal of a recent law that makes it obligatory to honor World War II-era Ukrainian nationalist groups. Biletsky’s graduation thesis was about one of them, the Ukrainian Insurgent Army, a militia guilty of the ethnic cleansing of Poles in western Ukraine.

This kind of baggage is hardly useful to a country that aims to become part of the Western world. Someday, official Kiev will need to distance itself from its far-right “heroes” and perhaps even fight them.

View:
Azov neo-Nazis parade through Mariupol on June 12, 2015, celebrating their control of the city 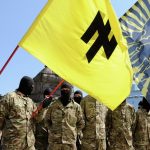 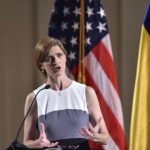 Why is Washington still pushing for war with Russia?Digest, Feature Articles, Russia