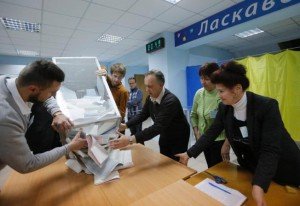 The Western media has barely reported them but local elections took place in Ukraine on Sunday.

The elections took place in conditions of economic crisis, defeat in the Donbass and political violence. Though the OSCE has, with some reservations but predictably enough, given the elections a fairly clean bill of health, it is impossible to call them free or fair.

The Communist Party, Ukraine’s oldest political party and once its biggest party, which was a serious contender for power as recently as the presidential elections of 2000, has been banned.

Attempts were made to ban the only remaining, legal anti-Maidan party, the Opposition Bloc, from contesting the elections in Kharkov. The Opposition Bloc is banned in parts of Western Ukraine.

Elections did not take place in two cities in eastern Ukraine – Krasnoarmeysk and the key port city of Mariupol – in the case of Mariupol supposedly because of a dispute with the local oligarch Rinat Akhmatov, but in reality almost certainly because the Opposition Bloc would have won a sweeping victory there.

In Kiev, the biggest opposition newspaper was closed after months of relentless harassment, an event which follows closely upon a series of murders of opposition politicians and journalists.

Meanwhile Right Sector continues its rampages, and ultra-right groups have now taken to protesting violently – and regularly – in Kiev near to the parliament building.

Needless to say, scarcely any of this is reported in the West.

The elections took place against this backdrop. Though because of it they cannot be considered an accurate reflection of opinion in Ukraine, they do nonetheless provide some information about the state of opinion there.

Firstly, it is clear that despite regular claims of a political consolidation around the Maidan movement, opinion in those parts of southern and eastern Ukraine that formerly voted for Yanukovych and the Party of the Regions remains unchanged and continues to oppose Maidan.

The Opposition Bloc, made up largely of politicians who previously belonged to the Party of the Regions, won sweeping victories in those parts of southern and eastern Ukraine where the elections took place. It claims to have won majorities in 17 regions including Odessa, Zaporozhye and Dnepropetrovsk.

The election also demonstrates the collapse of support for what might be called Ukraine’s official government parties.

The party headed by Ukraine’s Prime Minister Arkady Yatsenyuk declined to take part in the elections at all. With Yatsenyuk’s support in low single figures, it obviously feared a wipe-out.  As we have discussed previously, the only thing keeping Yatsenyuk in office appears to be the fact the US still supports him.

Batkivshchyna (Fatherland), the party of former Prime Minister Yulia Tymoshenko, once a leading contender for power, seems to have done dreadfully – confirming that her popularity has collapsed.

The collapse of support for Yatsenyuk and Tymoshenko might once have been expected to work to Poroshenko’s advantage.  Instead, support for his party nationally seems to have fallen to just 18%.

In Odessa, the candidate for mayor backed by former Georgian President Saakachvili – the man Poroshenko appointed to run the place – was conclusively defeated.

In Kiev, Poroshenko’s ally Klitschko – once widely expected to be the Maidan movement’s candidate for the Presidency – has been forced into a run-off in the elections for mayor.

By contrast, in Kharkov, Gennady Kernes, a former Party of the Regions politician with an uneasy relationship with Poroshenko and the central government, retained the mayoralty by a landslide.

In Dnepropetrovsk, neither of the two politicians who will compete in the run-off in the elections for mayor is a known ally of Poroshenko’s.

Most worrying for Poroshenko is that such support as he still retains seems to be increasingly concentrated in the small towns and regions of central Ukraine. In the politically crucial region of western Ukraine, support for him seems to be collapsing.

In Lviv, the ultra-nationalist – in fact neo-fascist – party Svoboda, which is increasingly defining itself in opposition to Poroshenko and the government, came first in the region and second in the city.

Svoboda also seems to have won a substantial share of the vote in Kiev, though the vote there has come under particular criticism from the Opposition Bloc for electoral rigging and may not be fully representative of opinion there.

Taken together, this means that what passes in Ukraine for the political “centre” – Poroshenko’s Bloc, Yatsenyuk’s party and Tymoshenko’s Batkivshchyna – is not holding. Both in the east and the west, it is being repudiated, by the anti-Maidan Opposition Bloc in the east, and by the growth of right wing ultra nationalist parties in the west.

Two facts, perhaps more than any others, show the degree to which Ukrainians are recoiling from mainstream politics.

Officially, the turnout was 46.6% – a figure which, as Leonid Bershidsky rightly says, might appear respectable in Europe but is scarcely so in a country that is supposed to be in the grip of a revolution.

Yanukovych’s former Prime Minister Mykola Azarov, currently in exile in Moscow, has however cast doubt even on this figure, claiming that actual turnout may have been only half that. Whilst Azarov is hardly a reliable source, the state of politics in Ukraine today means he may even be right.

Even more indicative of the general disenchantment is the election to a seat on Odessa’s council of an individual who calls himself “the Emperor Palpitane” – one of a group of individuals that includes people who call themselves names like Darth Vader and Chewbacca.

This is hardly serious politics, and the fact people who call themselves by such names are actually in places getting elected speaks volumes of what many people in Ukraine think their politics have become.

Where does Ukraine go from here?

There is a certain tendency to write-off the Opposition Bloc as a bunch of oligarchs and political has-beens. That underestimates the risk in today’s Ukraine of associating oneself with such a party. Standing as a candidate for the Opposition Bloc when Right Sector is on the rampage takes courage, and it seems there are people in Ukraine who have it.

The Opposition Bloc is, however, hardly in a position to challenge the government. It simply lacks access to the necessary levers of power to mount such a challenge, and it would face violent repression if it tried.

No government in Kiev has to date been overthrown by protests in the country’s east, and the Opposition Bloc is in no position to change this.

What the Opposition Bloc’s success shows is that the people of southern and eastern Ukraine remain as distanced from the aims of the Maidan movement as ever. When given the option, they vote overwhelmingly for whatever anti-Maidan party is on offer.

In light of this, one can say with reasonable confidence that opinion polls that purport to show that only eight per cent of Ukrainians favour rapprochement with Russia are almost certainly wrong.

Given the strength of anti-Maidan feeling on the ground, in the event of a government crisis in Kiev, the centre’s ability to control Ukraine’s southern and eastern regions and to prevent them going their own way must now be in doubt.

These forces are already in de facto opposition to the government. They make no secret of their hostility to many of its politics, and of course they staunchly oppose the peace plan agreed in Minsk.

The government’s failure to crack down on Right Sector shows how precarious its grip on the security situation has become, whilst the violence of some of the recent ultra-right protests in Kiev shows how willing to use violence the ultra-right forces are.

As Ukraine’s economic situation deteriorates, and as the conflict in eastern Ukraine remains deadlocked, the political situation in Ukraine is becoming increasingly volatile and unstable.