‘The deal appears to be a short-term solution and won’t solve the problem of unsustainable debt levels.’

Ukraine has agreed to a restructuring deal with creditors after five months of talks, giving President Petro Poroshenko some breathing room as he seeks to avert default and revive an economy decimated by a war with Russia-backed separatists[sic]. 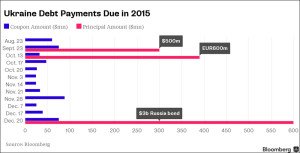 Ukraine debt payments due in 2015

Finance Minister Natalie Jaresko reached an accord with a Franklin Templeton-led creditor committee that includes a 20 percent writedown to the face value of about $18 billion of Eurobonds, the first of which matures in less than a month. In a joint statement announcing the initial agreement, the Finance Ministry and the creditor group said they are “pleased that a consensus on the best way forward for Ukraine has been found.” Bonds surged by the most on record.

Ukraine said it is offering the same terms to Russia, which holds a $3 billion bond due in December. Russian Finance Minister Anton Siluanov reiterated that Russia won’t participate in the restructuring. [1] 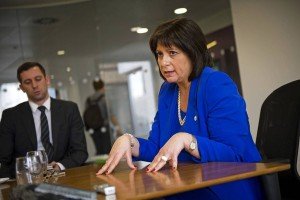 “It’s been a very difficult five months,” said Jaresko, a Chicago native who was given Ukrainian citizenship when Poroshenko appointed her finance minister last December. “I’m confident that the markets will receive this quite well,” she said in an interview on Wednesday. The agreement pushes back redemption dates by four years and sets interest at 7.75 percent on all maturities, above the current average, according to the joint statement. Securities will be exchanged for a share in a set of new bonds, Jaresko said on a conference call.

Poroshenko is seeking to meet the conditions of emergency assistance from the International Monetary Fund, which says debt restructuring should save Ukraine $15.3 billion through 2018, while trying to end a recession expected to bring a contraction of 8.7 percent this year, forecasts compiled by Bloomberg show.

Ukraine still faces severe financing challenges, including working out a compromise with Russia over its bond before the end of the year. Some analysts also warned that the restructuring also could prove inadequate, given Kiev’s remaining economic challenges.

“It’s just kicking the can down the road,” said Vitaly Sivach, a Kiev-based bond trader at Investment Capital Ukraine. “The deal appears to be a short-term solution and won’t solve the problem of unsustainable debt levels.”

Investors welcomed the deal, whose terms were less painful than some had expected. Ukraine’s $2.6 billion of notes due in July 2017 jumped 14.9 cents to 70.50 cents on the dollar at 5:44 p.m. in Kiev, the highest level in more than eight months.

Christine Lagarde, IMF managing director, said in an e-mailed statement that the deal would “help restore debt sustainability” and “substantially meet the objectives set under the IMF-supported program.” The European Bank for Reconstruction and Development said the agreement is a “very significant milestone.” It will help reduce economic uncertainty and spur investment, Francis Malige, the London-based lender’s managing director for the region, said by phone.

Ukraine will temporarily suspend a $500 million principal payment due on Sept. 23 and a 600 million-euro ($678 million) payment due on Oct. 13, Jaresko said. The country has another $4 billion of payments scheduled by year’s end, including to Russia.

A final agreement requires the approval of 75 percent of bondholders of each note at a meeting in which at least two-thirds of them are represented. Ukraine’s debt contains cross-default clauses that mean missing a payment on one results in default on all. The government earlier threatened to declare a debt moratorium to push negotiations along.

Some bondholders, including Yerlan Syzdykov, who helps oversee $254 billion, including Ukrainian Eurobonds, at Pioneer Investments, have already said they will back a deal.

Russian President Vladimir Putin’s government bought $3 billion of two-year, five  per cent bonds from Ukraine to support his longtime ally, then-President Viktor Yanukovych, in December 2013. Protests in the capital Kiev turned deadly a month later, eventually forcing Yanukovych to flee to Russia and Putin to end what would have been a $15 billion aid package.

“I’m offering Russia a restructuring opportunity that is the same as everyone else’s,” Jaresko said in the interview. “I’m hopeful that they will participate in this. It’s the best way to depoliticize this.”

Siluanov, the Russian finance minister, said in an interview with Rossiya 1 state television, “We won’t agree to a restructuring.” He added, “we will insist the funds are returned in full in December.”

Ukrainian officials say they expect to get $3.4 billion of International Monetary Fund financing over the next four months, on top of the roughly $6.7 billion received so far under the program.

The IMF said earlier this month that the biggest threat to Ukraine’s economic outlook remains the continuing fighting with pro-Russian rebels in the east. Ukraine reported seven soldiers were killed over the last 24 hours, the highest daily toll in more than a month.

Ukraine and the Kremlin-backed separatists who its  army has been battling for more than a year said Wednesday that they’d seek a “total ceasefire” starting Sept. 1. The leaders of Ukraine, Germany and France met this week in Berlin to discuss renewed violence.

Note by New Cold War.org:
Natural Gas Europe reports that Ukraine has also asked Russia to lower the price of the natural gas which Russia sells to it.

Ukraine has agreed to a restructuring deal to reduce its debt burden by about $3.6 billion. Moscow has refused to agree to Kiev’s terms.

U.S.-born Ukrainian Finance Minister Natalie Jaresko, who was granted Ukrainian citizenship when President Petro Poroshenko appointed her last December, has agreed with a creditor committee led by Franklin Templeton (which owns about $7 billion of Ukrainian bonds) on a 20 per cent write-down of about $18 billion worth of Eurobonds, the first of which mature in less than a month.

December’s payment of $3 billion in Eurobonds to Russia is the largest due for Ukraine this year. Most experts believe the Ukrainian government does not have enough money, so default is considered likely.

Ukrainian Prime Minister Arseny Yatsenyuk said that Russia didn’t accede to the creditors’ committee and wouldn’t receive better terms than the other lenders under any circumstances.

Ukraine has been negotiating the restructuring of its debt since March. The country has repeatedly warned about the possibility of a moratorium on foreign debt payments if creditors didn’t agree to the restructuring, including a write-off of about 40 per cent.