The following article is published by Voice of America.

Ukraine’s government is threatening to stop funding hospitals and medical services in areas in the east of the country controlled by Moscow-backed separatists. This is leaving the insurgents scrambling to make up for the shortfall amid signs that some locals want a return to normal.

The health minister of the self-proclaimed Donetsk People’s Republic, kidney specialist Victor Kuchkovoy, arguably holds much of the fate of the pro-Moscow insurrection in his hands.

The Ukraine government now says it will stop funding hospitals and doctors in rebel-held areas in the east. And if the Russian-backed insurgents fail to keep medical services going as well as other public services to be defunded, they risk a popular backlash from residents in the Donbas region, exactly what Kyiv hopes will happen.

The health minister says the rebels have been getting ready for the cutoff and are trying to maximize their resources. He says they monitor the 193 medical facilities under their control and direct humanitarian aid received mainly from Russia to where it is most needed. They have 15,000 patients already and have the capacity to cope with up to 20,000.

Even before the defunding announcement by Kyiv over the weekend, the Ukrainian government had been reducing support for the east, the health minister says. Many doctors and nurses in the rebel-held areas have not been paid for months and central government funding wasn’t consistent, impacting treatment for patients suffering from cancer, tuberculosis and AIDS.

This week there were signs that some of the residents of the Donbas are getting frustrated with the standoff between the separatists and Kyiv. Small anti-separatist protests mounted mainly by women and pensioners have been appearing. The so-called “hunger protests” are mainly springing up in the smaller towns.

In Sverdlovsk on Monday about 2,000 people participated in an anti-separatist protest and held up pro-Ukraine banners. They demanded Russian troops – the fighters say they are “volunteers” – to leave the town.

Ukraine’s Prime Minister Arseniy Yatsenyuk defended the Ukraine government’s decision Wednesday to cut funding of public services. In a post on his Facebook page, he argued Russia was to blame for any suffering because of its fomenting of the insurrection that began shortly after the ouster in the winter of pro-Moscow President Viktor Yanukovych.

“The Kremlin is responsible for the humanitarian disaster which is threatening to come to the Donetsk and Luhansk regions. As soon as the Russian troops leave the Ukrainian territory – normal life will return to the Donbas,” he wrote.

More than 4,000 people have died in the conflict in eastern Ukraine, according to the United Nations. More than 10,000 have been wounded.

It is unclear if the rebels, who in Donetsk seem better organized than in neighboring Luhansk, have the capacity to cope with the humanitarian challenges in the coming weeks.

Queueing for a food handout at an aid center funded by a local business oligarch, Yulia, 40, complains that the aid banks run by separatists in Donetsk aren’t good and give out less food. 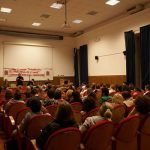