By Natalia Zinets, Reuters, Oct 28, 2014
Kiev – Ukraine is unlikely to receive a second tranche of a $17-billion loan program from the International Monetary Fund this year as expected, Finance Minister Oleksander Shlapak said on Tuesday, in the latest economic blow to the debt-ridden country.

Ukraine, which has been fighting pro-Russian separatists in its east and struggling to resolve a months-long gas pricing dispute with Moscow, badly needs cash to support its budget, pay off debts and prop up its faltering hryvnia currency.

Kiev had expected that a second tranche, worth $2.7 billion, of the IMF bailout would come in December after the Fund’s mission was due later this month. But Shlapak said an IMF visit was unlikely before a new government was formed. President Petro Poroshenko hailed a sweeping victory for pro-Europe parties in parliamentary election on Sunday, but it may take a month or more before a new cabinet takes over.

“An (IMF) mission will come when a new government is in place,” Shlapak told journalists. “They want to talk to a new government. The key question would be the adoption of a realistic 2014 budget.”

He added that most likely, the tranche would be postponed until next year. “The maximum that we would like to achieve is to get an IMF decision (on the tranche disbursement this year),” he said.

The mission will also decide how much additional financial aid Kiev may need, after warning in September that if Ukraine’s conflict with the separatists runs into next year, the country may need as much as $19 billion in extra aid.

The delay of the disbursement means that Kiev can only count on 760 million euros in aid from the European Union this year.

Ukraine’s finance ministry says it has enough funds to cover its external debt obligations until the end of January, but Kiev has asked Europe for an additional $2 billion euros to cover its gas company Naftogaz’s bills for the current heating season.

“The plan envisages purchases of a maximum 7 billion cubic meters of gas by the end of this heating season,” Shlapak said. “Naftogaz does not want to err and therefore we’re working on additional funding, we’re asking everyone we can.”

Russian President Vladimir Putin said on Friday he hoped Moscow and Kiev would finally reach a deal to end their gas dispute, in which Moscow has halted supplies to Ukraine. The Russian and Ukrainian energy ministers are expected to hold talks with the European Commission in Brussels on Wednesday over Ukraine’s unpaid bills and the price Kiev pays for its gas.

Shlapak said a deal there was unlikely. “I have the impression that the Russian side does not want to negotiate,” he said. “The conditions that are proposed do not stand up to criticism.”

Putin has appealed to the West to help Ukraine raise funds to pay for its gas supplies, adding that Kiev already owed Moscow $4.5 billion for deliveries last year and this.

Ukraine must pay $3.1 billion of that by the end of the year, which could cause a huge dent in the country’s gold and foreign reserves. They currently stand at $16 billion.

The war in Ukraine and the human right to free play with ethnic identitiesBackground, Feature Articles, Ukraine 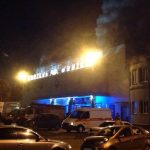 Arson alleged over fire during screening of LGBT film in KyivDigest, Ukraine