Western news media and governments are keeping largely hush about an economic blockade by Ukraine against Crimea that is starting to appear permanent. 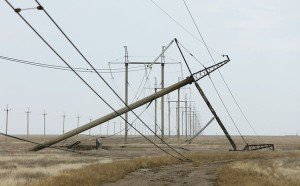 Electricity line near Chongar, southern Ukraine, sabotaged on the weekend of Nov 20-21, 2015 (Reuters)

TASS reports on Nov 27 that at least one of the electricity lines from Ukraine to Crimea that was sabotaged by right-wing extremists during the weekend of Nov 20-21 has been repaired. But no electricity is flowing to Crimea from Ukraine. The information comes from Russian Deputy Energy Minister Andrey Cherezov.

“We have information that the repair work on the Kakhovka-Titan power line has been completed,” he said. “Switching this line on would make it possible to supply about 150-200 megawatts from Ukraine to Crimea. But such hope is lost. Accordingly, all measures in Crimea are aimed at ensuring a minimum level of electricity supply to consumers.”

Kakhovka-Titan is a 220-volt line that supplies electricity to the Crimean border cities of Armyansk and Krasnoperekopsk. Much of its power goes to two districts of the Kherson region of Ukraine.

Kakhovka-Titan is one of four transmission lines that were sabotaged by rightist bombs. At the time of the sabotage, Ukraine’s electricity utility said it could restore one of the four lines in 24 hours and all four of them within days. But the Ukraine government is allowing a handful of extremists on the damaged sites to block repair crews.

Update: Ukraine leaves sabotaged power lines to Crimea in mud, article in Reuters, Nov 27, 2015. ‘Five days after saboteurs blew up power lines in southern Ukraine plunging Russian-annexed Crimea [sic] into an energy crisis, all four damaged pylons are out of action and engineers say they need a political decision to restore supplies…’

Crimea consumes an average of 1,000 megawatts of electricity per day, according to the Russian Energy Ministry. Emergency power backups are meeting only 30 per cent of normal demand.

An electrical cable under the Kerch Strait from Russia to Crimea was already under construction before last weekend’s sabotage. The construction is now on emergency pace. The cable is being laid in two stages. The first stage will deliver app 400 MW of power before the end of December. The second stage will bring an equal amount by summer 2016.

Another energy project already on the drawing table is a natural gas pipeline under the Kerch Strait, due to open in 2018. It will power several natural gas electricity generating stations to be built in Crimea.

Western media and governments see nothing, say nothing

The Crimea emergency is going largely unreported in the West. Where it is mentioned, it is pictured as a tit-for-tat game between Ukraine and Russia.

The first report in Canada’s largest daily newspaper, the Toronto Star, was published on Nov 27, six days following the attacks that cut Crimea’s electricity supply from Ukraine. The Star report is taken from the New York Times.

The Times article is a shortened version of a longer article that appeared two days earlier, both written by the newspaper’s Moscow bureau journalist Neil MacFarquhar. He traveled to southern Ukraine.

MacFarquhar describes the terrorist action by the Ukrainian extremists as a “standoff between Moscow and Kiev, with each side finding new ways to increase the tension daily”.

Ukraine’s government has not lifted a finger against the vigilante road blockade of food shipments to Crimea which extreme-rightists began on September 20.

Following the latest outrageous attack against Crimea, the regime in Kyiv began on November 23 to block all commercial transport to and from Crimea. This is described by the Times thusly: “Ukraine seeks to avoid further Russian aggression to stymie its political and economic stability, and an already unpopular government does not want to go against public sentiment.”

Interestingly, MacFarquhar provides an interpretation of the claim in most Western media that the vigilante actions against Crimea are being perpetrated by “Crimean Tatars”. He writes:

In Kiev, the main driver of the confrontation seems to be the leaders of the Tatar community who were exiled by Russia after it annexed the peninsula and who are now in Parliament as allies of President Petro O. Poroshenko… [1]

Here around Chongar, however, Tatar activists were not much in evidence. They seemed to have been assigned logistical tasks like providing food and housing for the men guarding road checkpoints and the fallen pylons. The fighters were mostly veterans from the east [Ukraine] who did not want to go back to civilian life.

MacFarquhar describes one of the Western media’s “Tatar activists”:

“The people of Crimea are not supposed to feel like they live in a resort while the country [Ukraine] is at war,” said Oleksiy Byk, 34, a chunky, bearded veteran who serves as the area spokesman for the Right Sector, a right-wing Ukrainian organization violently opposed to any accommodation with Russia.

Mr. Byk said he used to fight the separatists [sic] in the east, but after the ceasefire negotiated under the Minsk peace accords [in February 2015] finally took hold in September, he and many other hard-core fighters gravitated to the area just north of Crimea. They are spoiling for a fight, since Ukraine rejects Russia’s March 2014 annexation [sic] of the Black Sea peninsula as illegal.

Ukraine pours on the rhetoric

In its latest, self-destructive measure for the Ukrainian economy (and against the Ukrainian people), the government in Kyiv announced on November 25 that all air travel to and from Russia will be severed. Last month, Ukraine banned landing and takeoff rights for Russian airlines, prompting a move in kind by Russia.

Ukraine’s government has also announced that it wouldn’t buy gas anymore from Russia. But that statement is posturing which followed the decision by Russia’s Gazprom on Nov 25 to cease gas deliveries due to non-payment. The government is effectively bankrupt, living on borrowed money from the IMF. A declaration of default on the international loans it owes is expected.

The Donetsk People’s Republic has taken emergency measures to protect coal stocks and electricity infrastructure in the aftermath of the sabotage directed at Crimea, reports DAN news service. Prime Minister Aleksandr Zakharchenko has assumed direct responsibility over the measures.

The DPR has also halted coal shipments to Ukraine. This began in response to non-payment of bills, but has now also become a gesture of disapproval of Ukraine’s failure to restore electricity service to Crimea and of solidarity with the people of the peninsula.

Notes:
[1] Tatar civil organizations in Crimea utterly deny the claims in Western media that the Tatar figureheads in Kyiv who have accepted appointments to the Rada by Petro Poroshenko’s political machine– Mustafa Djemilev and Refat Chubarov—are “leaders” of Crimean Tatars. They say the two represent the viewpoints of only a small section of Tatars. The two figures have been denied entry to Crimea since the secession referendum of March 2014 because they refused to renounce inciting civil war on the peninsula.

Read also:
State of emergency in Crimea after right-wing extremists in Ukraine blow up electricity lines to the peninsula, by Roger Annis, Nov 25, 2015 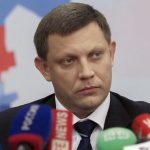 Zakharchenko: Minsk is perceived differently, there is less hope for peaceful negotiationsDigest, Ukraine 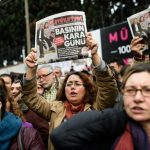