Kiev has suspended the protection of human rights and ordered the withdrawal of its institutions from areas controlled by local militia in the nation’s east. Rebels have branded the decree, which hits the population on winter’s eve, an ‘act of genocide.’

The move was prepared by the Ukrainian National Security and Defense Council last week and enacted by a presidential decree signed on Friday [Nov 14]. It has yet to be ratified by the newly-elected parliament, but the decree explicitly says that this procedure must be expedited – so there is little doubt that the new governing coalition will adopt it next week.

Arguably the most controversial part of the decree is the suspension of the European Convention on Human Rights in rebel-held areas. The convention, which guarantees basic human rights and fundamental freedoms in Europe, has a provision which allows some of its articles to be derogated by a signatory “in time of war or other public emergency threatening the life of the nation.”

Kiev has been insisting that the military campaign it launched against the dissenting provinces is not a war, but an “anti-terrorist operation.” Apparently, the operation threatens the life of Ukraine, which will now observe only those provisions of the convention, which cannot be derogated under any circumstances. In particular, they are the right to life, the prohibition of torture and slavery, and the right not to be subjected to unlawful punishment. Cutting ties with breakaway regions

In practical terms, the decree orders that many social and economic ties with the self-proclaimed Donetsk and Lugansk People’s Republics be severed. Kiev will withdraw all its officials and evacuate its offices in rebel-held areas. The order covers all public services, including crucial ones, such as schools, hospitals, and emergency services.

The same measure is applied to all state-owned companies and their employees and to prisoners serving terms in the affected parts of Ukraine.

The Ukrainian central bank has been ordered to stop servicing all banks operating in the rebel-held areas. The accounts of individuals living there and companies located there have been frozen. This will stifle the local economy, as businesses will have to conduct transactions in cash or use a bartering system.

At the same time, the rules of taxation and budget transfers between Kiev and local governments in the Donetsk and Lugansk regions will be altered under the decree.

Local heating and power plants will be subjected to a “special procedure for accounting supplies of fuel” to ensure that their debt will not grow. This potentially could involve cutting supplies altogether to the plants that don’t pay.

Ukraine’s decision to halt subsidies to rebel-held areas may be understandable. However, the problem of standing debts in Ukraine’s energy sector has a long history, as energy companies have been for years failing to collect payments from consumers, and as a result pay for fuel supply.

The debt burden has been a de facto social subsidy by the government – and a practice which the International Monetary Fund wants eradicated as a condition for further loans to Ukraine. For people in eastern Ukraine who may be left with no heat in the middle of winter, it’s an issue of survival rather than economic efficiency.

President Petro Poroshenko’s decree also repeals a Ukrainian law which provided special status for the rebel-held areas. The law was adopted by Kiev to deliver on its promises under the ceasefire it negotiated with the rebels in Minsk in September. Poroshenko threatened to repeal the law after the self-proclaimed republics held elections on November 2 in defiance of Kiev’s order not to do so.

The new measures, while apparently in line with rebels’ desire to be independent from Kiev, have been harshly criticized by them.

“Poroshenko’s decree on the total socio-economic blockade of Donbass is de facto an act on genocide and devastation of our people,” Igor Plotnitskiy, leader of the Lugansk People’s Republic, said. He added that his government would not change its course, and that people in Lugansk “will live better than Ukraine, which will find the rule of the oligarchs worse and more devastating than any blockade.”

A fellow official from the Donetsk People’s Republic, Denis Pushilin, said Poroshenko’s decree is “a flagrant violation of the Minsk protocol”. He called on the OSCE, which brokered the ceasefire deal together with Russia, to come up with comments on the situation.

Poroshenko’s decree marks Kiev’s acknowledgment of the reality on the ground, prominent Russian human rights activist Lev Ponomaryev commented. “Those territories are not controlled by the Ukrainian government, which cannot and does not want to perform its functions, as we see. De facto they are acknowledging a certain degree of sovereignty [of the self-proclaimed government over] those territories,” he told RIA Novosti.

“In my opinion, the most important thing now is that civilians don’t get killed there. If these measures held the ceasefire, one could probably welcome them,” he added.

But Mikhail Fedotov, who chairs the Russian Presidential Council for Human Rights, doubts that. “I believe those measures are dangerous and would hurt the civilian population in the conflict zone,” he said. “They are showing a desire to distance from the conflict zone. It does not make progress towards a peaceful settlement of the conflict.”

The presidential decree is one in a package aimed at stabilizing the situation in Ukraine. Poroshenko’s other orders are aimed at controlling the weapons that flooded the country amid the deterioration of the police force and toughening up punishments for war crimes, as well as reforming the military and energy sector. 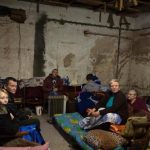 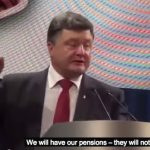 Poroshenko: ‘Donbas children will sit in cellars, ours’ will go to school’Digest, Ukraine