Ukraine’s parliament speaker said the nation is “running out of time” to resolve its political crisis, reiterating calls for a government shake-up to end months of infighting that’s jeopardizing the flow of international aid.

Volodymyr Hroisman, who hasn’t ruled himself out of the running to lead a revamped cabinet, told a conference that Prime Minister Arseniy Yatsenyuk and his team have “lost connection” with the ruling coalition in parliament. Finance Minister Natalie Jaresko, herself a candidate for premier, said at the same event that Ukraine’s government isn’t in crisis and is still performing its duties.

“We must make a decision very quickly,” Hroisman said Thursday at investment bank Dragon Capital’s conference in Kiev. “We have days” to form a new cabinet, “not months. The ball’s in the prime minister’s court.”

Ukraine is embroiled in its worst political crisis since its current rulers were swept to power following deadly street protests that ousted the nation’s Kremlin-backed leader. President Petro Poroshenko and the government have become bogged down by infighting over the slow pace of reforms including a clampdown on corruption. Ukrainians and the nation’s foreign backers are losing patience. The IMF has warned that a failure to address endemic graft risks sinking a $17.5 billion bailout.

Poroshenko, who’s out of the country on an official visit to Turkey, urged the coalition last week to decide on a new cabinet after two small parties quit. Yatsenyuk, who survived a Feb. 16 no-confidence vote, wants to lure another party back into the alliance to avoid early elections.

Hroisman said the priority is to accelerate stalled reforms and resume cooperation with the International Monetary Fund, which has delayed aid disbursements over the political uncertainty. While the hold-up in the bailout is a worry for investors and harms the hryvnia, it doesn’t put the country “on the edge of an abyss,” said Jaresko.

Economy Minister Aivaras Abromavicius, whose February resignation hasn’t been approved by lawmakers, said Thursday that Ukraine needs a new prime minister. Abromavicius, who left citing corruption inside Poroshenko’s party, said the chance of a Jaresko-led government of technocrats has risen “tremendously” since he stepped down.

Jaresko, a favorite among investors for leading talks with foreign bondholders during last year’s $15 billion debt restructuring, discouraged speculation over her candidacy. 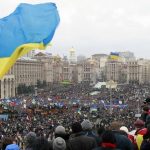 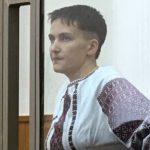 The trial of Nadiya Savchenko in RussiaUkraine