Why Ukraine must bargain for peace with Russia 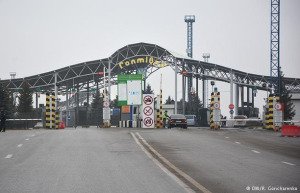 The “let’s make a deal” moment has arrived for Kiev and Moscow. But by pushing a hard-line agenda against Putin, the United States and Europe are only making things worse for Ukraine.

Vice President Joe Biden traveled to Kiev last week for his third visit to Ukraine’s capital in the past seven months. He arrived bearing gifts: additional nonlethal military aid for the embattled Ukrainian government, including body armor, helmets, night-vision goggles, and countermortar radar. The first three of 20 promised countermortar radar systems were flown to Ukraine aboard a cargo plane accompanying Air Force Two the day the U.S. vice president arrived. Following the Nov. 3 separatist “elections” reports of Russian tanks rolling across the border, and with the Minsk cease-fire agreements in tatters and almost 1,000 dead in the past two and a half months, this quite literal “deliverable” for Biden’s visit — combined with some tough words in public for Russian President Vladimir Putin (“Do what you agreed to do, Mr. Putin”) — is certainly appropriate. But let’s hope that the new kit and bravado gave Biden the public cover needed to make a far more important point to President Petro Poroshenko: Ukraine needs to make a deal with Russia if it wants to survive this crisis.

A political settlement would be far more important for Ukraine in the short to medium term than Western support — even more important than the lethal aid that Sen. John McCain is demanding, let alone the helmets and body armor that Biden delivered. And while the EU-Ukraine Association Agreement might be critical for charting a reform path for Ukraine’s future, the lack of a deal with Russia could easily render it irrelevant. That document was negotiated based on an assumption that economic ties with Russia would continue uninterrupted. Compensating Ukraine for the severing of those ties was not something Brussels ever contemplated.

Ukraine’s economy is highly dependent on Russia across a range of sectors, a legacy of its key role in Soviet-era production chains. The most oft-discussed dependency is, of course, natural gas, the critical energy input for Ukrainian industry and the primary heating fuel for Ukrainians’ homes. In 2013 alone, Ukraine imported 27 billion cubic meters of Russian gas and paid approximately $11 billion for it. And there is no feasible alternative to gas from Russia in the short to medium term — both for heating Ukraine through the winter and for powering its major industrial enterprises in the metals and chemical industries. Even if all possible pipelines were operating at full capacity, reverse flow from Europe could provide at most 12 billion cubic meters. And the gas relationship with Moscow is also a key source of fiscal stability for Kiev. The Ukrainian coffers received approximately $3 billion to $3.1 billion from Gazprom in transit fees in 2013 — a critical cash injection given the ballooning budget deficit and national debt.

But Ukraine’s dependency on Russia is certainly not limited to gas imports: A third of its 2013 exports went to Russia (about the same as went to the European Union). That amount will certainly be lower in 2014, and the EU’s share will certainly be higher as a result of Brussels’s May 2014 decision to lower barriers to Ukrainian imports. However, the structure of Ukraine’s exports to the two markets differs dramatically. Europe mostly buys metal ore, ferrous metals, grain, and other agricultural goods from Ukraine. Russia, by contrast, imports machinery, transport services, and industrial products — i.e. value-added goods and services that tend to provide not only more jobs but also higher-paying ones.

Furthermore, millions of Ukrainians work in Russia and send money home to support their families. For 2013, the National Bank of Ukraine calculated remittances sent from Russia at $2.62 billion, but that number counts only formal bank transfers and money sent through international transfer services. Given the ease of crossing back and forth, presumably Ukrainians working in Russia bring home in cash or in goods at least as much if not more than what passes through the banking system. In other words, remittances from Russia were probably around 3 percent of GDP in 2013.

Putin has used the conflict in Ukraine’s eastern Donetsk and Luhansk regions (aka the Donets Basin, or the Donbas) to put the screws on Kiev, and he could dial up the instability there at will. But the conflict in the Donbas also provides him with additional economic leverage. Before the conflict, the Donetsk and Luhansk regions combined accounted for 15 percent of Ukraine’s population, 16 percent of its GDP, 25 percent of its industrial output, and 27 percent of its exports. In short, Ukraine without the Donbas would be in an even more unsustainable economic position than it already is today. And the only way for Ukraine to regain full control of it is through an agreement with Russia.

So, from an economic standpoint alone, a lasting political settlement between Moscow and Kiev is clearly necessary. So why isn’t a process to make one happen even on the agenda?

On one level, the answer is straightforward: Key conditions needed for a productive conflict resolution process are utterly absent. These include some overlap in the parties’ goals, allowing for a potential negotiated outcome that all sides can claim as a victory; a degree of flexibility in negotiating positions; an overriding shared interest in getting a deal; and domestic support for compromise.

Let’s examine the parties’ goals. There has been a lot of speculation about Russia’s aims in Ukraine, ranging from accusations of new Anschluss to allegations of a manufactured war intended to boost domestic approval ratings. But actually, Moscow’s objectives were made clear very early in the crisis: On March 15, the day before the so-called “referendum” in Crimea, Russian Foreign Minister Sergei Lavrov handed U.S. Secretary of State John Kerry a draft text of a “Friends of Ukraine” international action plan. The Russian Ministry of Foreign Affairs published the proposal online two days later. The key demands in the document are neutrality, nonexclusive geoeconomic arrangements, and decentralization of authority from Kiev to the regions.

What about the Ukrainian and Western goals? Nominally, the EU-U.S. strategic goal for Ukraine, shared by the current government in Kiev, is both straightforward and breathtakingly ambitious: to create a Western-oriented, Western-integrated, prosperous, territorially integral, secure, and democratic Ukraine.

This examination of the parties’ goals paints a rather bleak picture. The goals of the parties to any future settlement to this crisis have only one thing in common: Achieving one side’s goals necessarily entails undermining the other side’s.

Meanwhile, Russian and Ukrainian leaders are preparing their publics for confrontation, not compromise. As Poroshenko recently tweeted, “We are prepared for a scenario of total war.” Moreover, in Ukraine, compromise with Russia is nearly akin to treason. While talking to Kiev is not as taboo in Moscow, it would be politically impossible for any Russian government, and particularly Putin’s government, to be seen to have “lost” in what is portrayed there as a battle for Ukraine.

If we imagine a negotiation between Putin and Poroshenko conducted in a political vacuum, without the historical legacy of the EU association process, the war, the Crimea annexation, etc., it is not inconceivable that they could reach a deal. The contours of the compromise would likely include: reaffirmation of the reality of Ukraine’s nonalignment; mutually satisfactory trade arrangements among Russia, Ukraine, and the EU; implementation of a decentralization plan somewhat more ambitious than Poroshenko’s June proposals, but significantly less far-reaching than Russia’s March proposals; a return of full Ukrainian control over its border with Russia, perhaps with an international peacekeeping force on the ground in the Donbas; and so on.

The events of the past year, particularly Russia’s brazen actions in Ukraine, make this scenario seem more like a fairy tale than a historical counterfactual. The problem for Ukraine and its Western partners is that the Kremlin does not need a deal to achieve its baseline objectives in this conflict. It could do so by bringing Ukraine to its knees economically or by continuing to sow instability in the east of the country, which effectively makes it impossible for the government in Kiev to pursue Putin’s nightmare of a Ukraine in NATO and the EU. Moscow would prefer a negotiated settlement over these scenarios, if only because it would be far less costly. But it does not need one. The same cannot be said for Ukraine.

For Western policymakers, it is this factor — Russia’s strong bargaining position, relative to both Ukraine and the West — that ultimately makes this crisis so different from others in the post-Cold War period. Never before have they faced a major nuclear power as an adversary in a regional dispute occurring in that power’s backyard. In Kosovo, Russia was an opponent, but Kosovo barely registered in the hierarchy of Russian national security imperatives. Ukraine, by contrast, ranks just short of national survival. And eastern Ukraine is one of a few places beyond Russia’s borders in which Moscow can deliver the assets required to sustain an insurgency. Even if it were to receive the much-ballyhooed lethal military assistance from the United States, Ukraine cannot defeat such an insurgency if Russia remains determined to prevent it from doing so.

In all the bad news about the breakdown of the Minsk agreements in recent weeks, it’s easy to miss the silver lining. First, Putin and Poroshenko demonstrated that they could in fact negotiate a deal; apparently, they hammered out the parameters of what became the first Minsk agreement through direct talks. That two countries embroiled in a bitter conflict would have difficulty implementing their first attempt at a negotiated settlement should be no surprise; it would have been truly shocking if they had succeeded to go from war to partnership overnight. Second, despite all the public rancor, joint work on some Minsk-related activities continues: A Joint Center for Control and Coordination, manned by Russian and Ukrainian military officers, continues to demarcate the line of contact and facilitate the cease-fire.

The challenge for the West is to couple support for Ukraine with a diplomatic strategy to help Kiev build on the remnants of Minsk to achieve broader and better-functioning arrangements with Moscow in order to de-escalate this crisis. The United States should be encouraging and facilitating talks with just as much, if not more, gusto as it delivers military assistance. Constructive involvement and advice from senior U.S. diplomats might have led to a more robust first attempt than the Minsk agreements. But thus far Washington seems more interested in delivering body armor than deploying special envoys.

Showing up in Kiev with a public emphasis on encouraging Ukraine to make a new deal with Russia would have been politically impossible for the U.S. vice president. So let’s hope that the radar airdrop gave Biden the leverage to be his usual blunt self during his closed-door meetings with Ukraine’s leaders. For Ukraine to survive this crisis, it needs a settlement. There is no alternative.