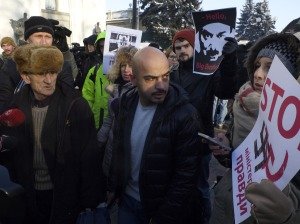 Journalists in Ukraine protest in front of Rada on Dec. 2, 2014 a newly created ‘ministry of information’, joined by new MP Mustafa Nayyem, photo by Christopher Miller-Mashable

KIEV, Ukraine –- The Ukraine government has established a department that critics are calling the “Ministry of Truth” — borrowing a term from George Orwell’s classic dystopian novel 1984. Officially called the Ministry of Information Policy, the new office will be headed by Yuriy Stets, head of the Information Security Department of the National Guard of Ukraine. A close ally to President Petro Poroshenko, Stets was formerly chief producer of the TV channel that Poroshenko still owns.

While its main objective appears to be confronting Russia’s formidable propaganda machine, the Ministry is likely to also restrict free speech and inhibit journalists’ work — particularly in war-torn eastern Ukraine, according to observers.

At a demonstration outside parliament, Ukrainian journalists decried the new ministry, which deputies approved in the Verkhovna Rada late on Tuesday, along with the rest of the country’s Cabinet of Ministers. About 40 journalists and activists from Ukrainian watchdog groups Chesno (Honest) and Stop Censorship! held posters that read “Hello, Big Brother.” They urged lawmakers entering the parliament ahead of Tuesday’s session to vote against appointing Stets as its head.

The creation of the ministry comes on the heels of critical reports from journalists and rights groups about its use of controversial weapons in eastern Ukraine, as well as possible war crimes committed by its armed forces.

Ukraine’s government is clearly frustrated by its lack of success in disseminating its messages. “You must understand, we are being killed by [Russian] guns as well as their propaganda,” a top security official told Mashable when explaining why he supported the creation of the ministry.

A report released last month by The Interpreter website describes just how Russian propaganda works, and how effectively it is being used as a weapon of the Kremlin. The report outlines a “hybrid war” that combines disinformation “to sow confusion via conspiracy theories and proliferate falsehoods” with “covert and small-scale military operations.”

Still, there are some in the government who do not endorse the ministry. A senior official in the Presidential Administration, who spoke anonymously because he feared repercussions from officials for talking to a journalist, said he was “very concerned” about the ministry and how it would be used. “Honestly, I’m not sure such a ministry is needed,” the official said, adding that others inside the administration have also questioned the move. “The way to fight Russian propaganda is with honestly and transparency, not trying to beat Russia at its own game.”

The Ministry of Information Policy was pushed through with little notice and even less debate on the parliament floor. That could be because the president himself pushed the concept on members of his party, the largest faction in parliament, and has great sway over the ruling coalition.

Deputies to whom Mashable spoke ahead of the parliament session on Tuesday said Poroshenko personally urged them to support the ministry in a tense last-minute meeting called late Monday night. Former investigative journalist turned lawmaker Serhiy Leshchenko, who was elected in last month’s vote on the ticket of the president’s party, was present at the meeting. He says Poroshenko “was very serious” about confirming Stets the following day in parliament. Leshchenko, a long-time advocate for journalists’ rights, said he would vote against the ministry. Inside parliament on Tuesday, he posed for a photograph with a sign that read “Stop censorship! Journalists against the Ministry of Truth.”

Oksana Romaniuk, director of local media watchdog Institute of Mass Information and Ukraine representative for Reporters Without Borders, told Mashable that “the government wants to control the media’s messages first, and second, they want to control access to the messages.”

Details on how the ministry will operate are murky. No documents were made available to the public or deputies, and Stets did not reply to Mashable‘s requests for comment. But Romaniuk fears the government has given itself “carte blanche.” 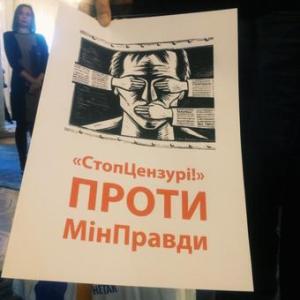 Journalists demonstrating at parliament likened the move to taking a step “back to the USSR.” Several held signs that combined the Soviet Union’s hammer and sickle with the Nazi swastika. “This is a fascist move,” one demonstrator told an observing who was arguing in support of the ministry. She said it would only lend fodder to Russia’s argument that Kiev is now being led by a “fascist junta.”

And she wasn’t the only one who thought so. “Dear team Poroshenko, the pursuit of absolute power in this country means a final career,” Tatyana Nikolaenko, chief editor at Ukraine’s Insider magazine, wrote on Facebook. “If you create this ‘Ministry of Truth’ the president’s rating will collapse as quickly as it rose in the winter of this year.”

She added: “You can not win the information war [against Russia] with it, because with the creation of the Ministry you’ll give Russian propaganda endless references to [Nazi Minister of Propaganda Joseph] Goebbels and Orwell.”

But Kiev sees the creation of the ministry as a necessary move to fight Russia’s incessant propaganda, which has been particularly successful over the course of the ongoing crisis. The concept was first floated on Sunday, when Interior Ministry advisor Anton Herashchenko mentioned it in a post on Facebook. In it, he mentioned the need to counter the Russian message.

“There is an idea to create the structure of the Cabinet of Ministers Ministry of Information Policy, whose main task is the protection of Ukraine’s information space of the Russian propaganda and counter-propaganda in Russia, in the temporarily occupied territories of Crimea and [eastern Ukraine]. This issue is long overdue and I would even say too late,” Herashchenko wrote.

Stets relayed his thoughts on the new ministry in his own Facebook post on Monday. “I see it this way: different states with different historical and cultural experiences in times of crisis came to need to create a body of executive power that would control and manage the information security of the country,” Stets wrote.

According to Stets, none of the current state structures could efficiently handle those tasks. “The information and communications space remain uncoordinated now, full of contradictions and influence of foreign agents, and under conditions of geopolitical wars becomes a weak part of the country, a subject of enemy attacks,” he added.

Christopher Miller is Mashable’s Senior Correspondent covering world news, particularly the post-Soviet space and especially Ukraine, where he has lived and worked for the past five years. He is a former editor of the Kyiv Post and has published with GlobalPost, The Telegraph, The Times, The Independent and others. Originally from rainy Portland, Oregon, he is also a Returned Peace Corps Volunteer (Ukraine). See also on Mashable: Ukraine’s most pro-Western parliament in history holds first session. 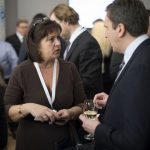 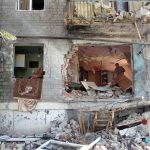