By Greg Butterfield, published in Red Star Over Donbass, April 13, 2015

Just days before the Pentagon is set to begin training troops from Ukraine’s National Guard, including the notorious Azov Battalion, Kiev’s parliament voted 254-0 on April 10 to ban “communist propaganda,” symbols, and anything deemed as “glorification” of Soviet history. 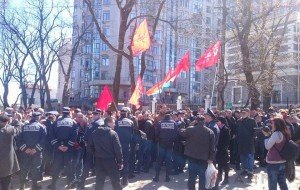 The same day, the parliament, known at the Verkhovna Rada, put its official stamp of approval on the ultra-right Ukrainian Insurgent Army (UPA) and its successor, the Organization of Ukrainian Nationalists (ONU), declaring them “freedom fighters” entitled to receive benefits under the new law.

The UPA/ONU and its leader, notorious Nazi collaborator Stepan Bandera, worked hand-in-hand with Hitler’s Germany during its World War II occupation of Soviet Ukraine. Later, during the Cold War, the organization worked with the U.S. CIA to carry out terrorist actions against the USSR.

Some 270 of the Rada’s 450 deputies voted in favor of the bill. No one dared vote against it.

Earlier, on April 7, the Security Service of Ukraine (SBU) announced it “had discontinued the operation of a number of Internet sites that were used to perpetrate information campaigns of aggression … aimed at violent change or overthrown of the constitutional order and territorial integrity and inviolability of Ukraine.”

According to an April 9 report in the independent Kiev newspaper Vesti, the “SBU has blocked more than 10,000 websites” and “seized the servers” of web hosts. (Global Research, April 10)

But there is resistance, too. April 10 is also the anniversary of Odessa’s liberation from Nazi occupation. There people protested a visit by Ukrainian President Peter Poroshenko. Confronting neo-Nazi regime supporters, they chanted: “Murderers!” and “Fascism will not pass!” (Timer-Odessa.net)

In a statement released on its Facebook page, the revolutionary Marxist organization Union Bortoba (Struggle) said: “Today’s decision by the Rada to ban communist ideology is the same logical and inevitable result of the victory of Euromaidan as the civil war, Draconian utility rate increases and elimination of social benefits, along with the remnants of free education and health care.

“Anti-communism was proclaimed one of the three components of the ideology of this movement of the Ukrainian bourgeoisie, along with aggressive nationalism and neoliberal market fundamentalism.”

Borotba, which vows to “promote communist ideology in Ukraine with a vengeance” despite the ban, was one of the first organizations forced underground after the February 2014 coup in Kiev. Many of its activists have been forced into exile, imprisoned and violently attacked.

The new laws were adopted to precede the upcoming 70th anniversary of the Soviet defeat of Nazi Germany, which is marked in the former Soviet Union as Victory Day, May 9.

This means Ukrainian veterans of the conflict who display their Red Army uniforms and medals, or anti-fascists who carry the red Banner of Victory (the flag planted by Soviet troops atop the Reichstag in Berlin) will be subject to arrest and could face a prison sentence of 5 to 10 years.

On the other hand, those who collaborated with Hitler’s genocidal regime, and those who follow in their footsteps today, will be celebrated as heroes.

This alliance of capitalist oligarchs, neoliberal politicians and neo-Nazis came to power in an illegal coup, funded and supported by Washington, in February 2014.

One year ago, on April 13, 2014, Kiev’s new rulers launched a war of terror against the primarily-Russian speaking population of Southeastern Ukraine, as well as anti-fascists throughout the country. According to the United Nations, more than 6,000 people have died in the junta’s war against the independent Donetsk and Lugansk People’s Republics of the Donbass mining region bordering Russia.

The latest ceasefire agreement, negotiated by Russia, Germany and France in February, was violated at least 200 times by Ukrainian forces during the first week of April, said Donetsk Deputy Defense Minister Eduard Basurin. On the eve of Orthodox Easter celebrations April 12, Kiev’s forces bombed a hospital in the capital of Donetsk. (TASS, April 12)

Alexander Smekalin, a deputy of the Donetsk People’s Republic Supreme Soviet and co-founder of the Union of Left Forces of Donbass, announced on social media April 13: “In light of recent events in the territories occupied by the Kiev junta, liberated Donbass will welcome refugees and displaced person from former Ukraine. We will provide political asylum for internationalists and anti-fascists.

A court case brought by the junta to ban the Communist Party of Ukraine (KPU) has not yet been decided. However, the new ban on communist “propaganda” and symbols sets the stage for such a ruling.

Days before the Rada vote, on April 1, the Security Service of Ukraine – the country’s equivalent to the FBI – initiated a criminal case against KPU leader Peter Simonenko. SBU head Valentin Nalyvaychenko claimed Simonenko was responsible for “terrorist activities” by party members, illegally obtaining Russian citizenship, and collaboration with the Communist Party of the Russian Federation. (April 1 KPU statement at SolidNet.org)

It comes as no surprise, then, that the same day Nalyvaychenko told a Kiev newspaper that the SBU would adopt the methods and structures of the ultra-right OUN-UPA, bragging that he “has already studied the methods of the founders of the OUN security service.” (TASS, April 1)

Several other well-known Marxist leaders have recently been put on trial, including A.A. Majewski, editor of “Workers’ and Peasants’ Truth” and Secretary of the All Union Communist Party (Bolsheviks), and former Rada Deputy Alexander Bondarchuk, editor of “Working Class” and Chair of the All-Ukrainian Union of Workers.

Andriy Manchuk, editor-in-chief of the Ukrainian Marxist website Liva (“The Left”), explained: “For those who do not understand, the bill is going to ban Marxism, among other things associated with the communists, and leftist ideology in general. … Travel agencies can promote Ukraine thusly: ‘In our country, it is possible to go to Europe before 1945 without a time machine.’”

Manchuk was among those forced to seek refuge last year in Crimea, where residents voted in a popular referendum to rejoin Russia following the coup in Kiev.

The anti-communist law adopted by the Rada cynically compares the Soviet Union with Nazi Germany, and claims to ban the symbols and ideology of both.

But this is merely a lie for international consumption, a flimsy attempt to make the latest wave of repression more palatable to Washington’s European junior partners.

In fact, with Washington’s support, fascist elements are becoming more deeply integrated into the Kiev government and Ukrainian military. And Nazi symbolism is ever-present, from the glorification of Stepan Bandera to the flags flown by the National Guard Azov Battalion, which bear the “Wolfsangel” and other recognized symbols of fascism.

In late March, a standoff between President Peter Poroshenko’s government and rival oligarch Igor Kolomoisky ended when Washington reportedly came down in favor of the current regime. Kolomoisky is a main funder of the Right Sector neo-Nazi movement and widely believed to be the architect of the massacre of 48 anti-fascists in Odessa on May 2, 2014.

However, this should not be interpreted as a shift from the far-right Kolomoisky to the more “moderate” Poroshenko. On the contrary, the junta is integrating fascist elements into central roles in the state at an ever-quickening pace.

Why? The neo-Nazis have proven to be the only motivated force in the war against the Donbass republics, while working-class draftees have deserted or fled the country in droves. Like the ultra-right Latin American forces trained at the “School of the Americas” at Ft. Benning, Georgia, these elements are the backbone of U.S. plans to dominate the region and bring NATO bases to Russia’s Western border.

Case in point: Dmitry Yarosh, head of the fascist Right Sector and Kolomoisky client. Not only was he elected to the Rada during staged elections last November; on April 6, Yarosh was appointed as a top advisor to Col. General Viktor Muzhenko, Chief of General Staff of the Ukrainian military.

Yarosh “will act as a link between the volunteer battalions and the General Staff,” military spokesperson Oleksiy Mazepa said. (AFP, April 7)

The Right Sector’s 10,000-strong Ukrainian Volunteer Corps will be integrated into the chain of command and receive funding from the Ministry of Defense. “Our combatants will be well-armed from now on, as up until now equipment was supplied by volunteers,” said spokesperson Artem Skoropadskiy.