By the International Information Group on Crimes against the Person, August 12, 2015

The report ‘Massive Human Rights Violations during the Civil Conflict in Ukraine 2013-2014’ is included in the list of books banned by Ukraine for import into the country. The Russian-language book and report is the annual report of the International Information Group on Crimes against the Person (IGCP). The principle author of the report and the coordinator of the ICGP is Alexandr Dyukov, who lives in Russia. 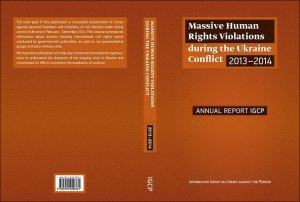 The list of 38 banned books was prepared and issued by the State Committee for Television and Radio Broadcasting of Ukraine. It was published on the official page of the Customs Service of Ukraine on Facebook on August 7. “We present a list of books banned from importing to Ukraine in order to prevent informational war attacks and misinformation, the spread of anti-humanism, fascism, xenophobia and separatism, encroachment on the territorial integrity and the state system stipulated by the Constitution of Ukraine,” says the report of the Customs Service of Ukraine.

Massive Human Rights Violations during the Civil Conflict in Ukraine 2013-2014 was published at the end of June 2015. The book presents facts concerning crimes against the person and violations of civil rights and freedoms committed during the civil conflict in Ukraine. It contains summarized information about violations of the international norms of human rights by state authorities, non-state organisations and armed groups in Ukraine. At the same time, the publication lists violations of human and civil rights committed by all parties of the conflict.

“Our final report shows that large-scale human rights violations acquired a systematic character long ago,” says Alexandr Dyukov. “All parties of the conflict neglect human rights. Within the so-called anti-terror operation, the Ukrainian military regularly commit crimes which are, in fact, war crimes, such as murders, tortures, abductions and unselective attacks on civilians and infrastructure.

“These crimes have a systematic character with a certain involvement of the state authorities, thus they can be qualified both as war crimes and crimes against humanity. The information revealed in our publication gives a clear confirmation of this.”

Mr. Dyukov is not surprised with the ban of the book in Ukraine. “Let me remind you that in May, the Ukrainian Parliament officially announced the refusal of Ukraine to fulfil the undertaken international duties to protect human rights,” says Alexandr Dyukov. “After all, it’s a logical decision. Violations of basic human rights in modern Ukraine are not only daily life routine but also an element of the state structure. Consequently, collecting and spreading information about these violations is a seditious and anti-state act. However, we hope that due to the new ban, more people will learn about our book. Fortunately, there are no borders in the Internet.”

At the moment, the IGCP team is working on the English version of its report. The Russian-language version can be read and downloaded here. It is 344 pages long.

The International Information Group on Crimes against the Person (IGCP) was established in February 2014 as an international civil initiative. The group aims at collecting information about political and other crimes against the person committed in Ukraine since February 22, 2014, as well as informing people in Ukraine, the European Union and the Russian Federation about them.

IGCP is coordinated by Alexandr Dyukov, a Russian historian and head of the Historical Memory Foundation.