The International Monetary Fund (IMF) has announced a new bailout package for Ukraine. It will disburse up to $17.5 billion over the next three years, subject to all the usual conditions for fiscal austerity and neoliberal reforms conducted by the Ukraine government.

The bailout package is a joke. As a former IMF economist Robert Kahn, a senior fellow at the Council on Foreign Relations, put it, “The odds of this program surviving intact for four years, or even through the end of 2015, are not much higher than for the original 2014 program.”

One of the biggest risks is that the bailout is based on a fragile cease-fire holding between Kiev and the militants in eastern Ukraine. A re-escalation would scupper the ability of the government to meet its obligations to the fund. The fund’s approval of the program despite the “exceptional risks”, and the clear breaking of basic rules on debt sustainability, shows the package is a really political decision by the West to shore up a pro-European government in its strategic battle against Russia.

The IMF has had to revise down its growth forecast for the country again. It now assumes a 5.5% contraction this year and a rebound to growth next year at 2%. “Private forecasters predict a deeper recession, as much as a 10 percent decline this year and a further fall next year”, said Kahn. Even the IMF staff had to admit in their 173 pages of program documentation that “the uncertainty around these projections remains exceptionally high”.

Part of the package includes the expectation that private creditors (the Russians and US hedge funds) will agree to a “haircut” on the $15 billion in Ukraine bonds that they hold. Again the IMF had to admit that this may turn out to be wishful thinking. “Creditors may balk at the terms being offered in the debt operation and holdouts may try to free ride”, the IMF said. The process could turn “disorderly”, a fund euphemism for default.

The IMF said debt negotiations must be completed by June with a high creditor participation rate to trigger the next tranche of emergency cash.

Of course, all this assumes that the Kiev government will operate efficiently and without corrupt practices – some hope. Most likely, if the fighting in the east restarts and debt restructuring negotiations collapse, the economy will continue into free fall and the public debt ratio will double, pushing Ukraine into total default.

Ukraine’s recently appointed finance minister Natalie Jaresko is a US national who adopted Ukrainian citizenship to take up her post. The 49-year-old former banker, who only got her Ukrainian citizenship the day she was appointed minister in December, reckons that the war has consumed about 20% of the economy, taking out a region rich in industry and commodities. Corruption is endemic throughout Ukraine. The IMF estimates that Ukraine’s underground — and non-tax-paying — economy is as much as 50% of GDP. The hryvnia currency has fallen 70% since last year.

Inflation is officially 28.5% but, according to Johns Hopkins professor Steve Hanke, it’s really more like 272%. FX reserves have now fallen to just one month’s worth of imports. The economy is now smaller than it was when it gained independence from the Soviet Union in 1991.

It is in this environment that the IMF is providing funds, but just like Greece, not to help the people of Ukraine but to meet the demands of its foreign creditors (European banks, Russian banks and US hedge funds). And this “bailout” is to be administered along with all the austerity measures by a US banker with brand new Ukrainian citizenship.

In the meantime, Ukrainians are literally starving. President Poroshenko ordered the opening of food warehouses. The director of the Ukrainian State Reserve Vladimir Zhukov went to the store houses and found them empty! Why? Because all the reserves had been sent to the frontline to feed and water the troops in the east. And last year’s entire harvest was sold abroad, while the acreage for the new sowing season was reduced by 30%. Having learned of the empty shelves not only in the stores but also in the State Reserve, Poroshenko reportedly went into shock.

The winter weather may nearly be over – but it’s going to be a permanent winter for Ukraine’s people right through the summer.

Ukraine says creditors expected to pay some of its foreign debt restructuring, by Reuters, March 15, 2015 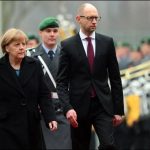