Since the New Year, Ukraine’s currency – the hryvnia – has collapsed, losing 51 percent of its value against the U.S. dollar. To put this rout into perspective, consider that the Russian ruble has only lost 8 percent against the greenback during the same period.

To calculate the inflation rate in Ukraine, all that is required is a rather straightforward application of a standard, time-tested economic theory (read: PPP). At present, the black-market UAH/USD exchange rate sits at 33.78. Using this figure and black-market exchange rate data that the Johns Hopkins-Cato Institute for Troubled Currencies Project has collected over the past year, I estimate Ukraine’s current annual inflation rate to be 272 percent – and its monthly inflation rate to be 64.5 percent. This rate exceeds the 50 percent per month threshold required to qualify for hyperinflation. So, if Ukraine sustains its current monthly rate of inflation for several more months, it will enter the record books as the world’s 57th hyperinflation episode.

Ukraine unofficially has 272 percent inflation Ukraine’s currency has fallen 70 percent since the start of 2014, and that’s pushed it into hyperinflation. By Matt O’Brien March 1 Source: Bloomberg Source: Bloomberg

Hyperinflation is always and everywhere a political phenomenon.

It happens after wars or revolutions, when governments have to print the money they need because there’s not much of an economy left to tax—which brings us to Ukraine. It had a revolution, it has a war now, and it’s all but broke. Inflation is officially 28.5 percent, but, according to Johns Hopkins professor Steve Hanke, it’s really more like 272 percent. And that’s only going to get worse as long as Ukraine’s currency does.

It’s hard to overstate how challenged Ukraine is. Its economy has actually shrunk since communism ended in 1991. Or since 1992. Or even 1993. That’s because communism never really did end. Ukraine just traded party bosses for oligarchs. Sure, it privatized companies and introduced markets, but Ukraine didn’t shed its Soviet-era corruption or inefficiency. There was barely any rule of law, tax rates had to be jacked up to make up for all the wink-wink, nod-nod tax evasion, and, as a result, even more of the economy entered the shadows. The IMF estimates that Ukraine’s underground—and non-tax-paying—economy is as much as 50 percent of GDP.

Now Ukraine’s not-so-cold war with Russia is destroying the little that’s left. It’s not just that Ukraine has lost the factories in the rebel-held east that make up a quarter of its industrial capacity. It’s that it can’t afford to fight a war against what is still its biggest trading partner—Russia. The only way for Ukraine to pay its bills is to dip into its reserves. But those have dwindled down to $6.42 billion, only enough for a little more than a month of imports. (Three months worth is considered the absolute least you can get by with). So Ukraine has done what all countries do when they’ve run out of money: go to the IMF. It’s announced a $17.5 billion bailout in return for tough reforms, including cutting energy subsidies for households. But even that won’t be enough to stop Ukraine from defaulting on its debt—or, if you’re feeling more polite, restructuring its bonds. Those have already fallen to less than 50 cents on the dollar in anticipation of the nonpayment to come.

In short, Ukraine doesn’t have any foreign currency and doesn’t have the ability to earn any more. And that means there’s nothing left to support the value of its currency, the hryvnia—so it doesn’t have much anymore. Ukraine had been pegging it at 8 per dollar before the war began, but was then forced to let it slide down to 16 per dollar, where it tried to re-peg the hryvnia. This failed. Ukraine didn’t have the dollars to prop up its currency for very long, and when it belatedly admitted this, the hryvnia collapsed. Then it collapsed some more after the latest peace deal fell apart. So Ukraine’s central bank has done the only thing it could do: everything. It made its capital controls even stricter, banned currency trading, then reversed the ban on currency trading but begun intervening directly. It’s worked a little. Well, at least the hryvnia has rebounded from a low of 33.5 to now 27.2 per dollar. But that, as you can see above, is still a 70 percent fall from the start of 2014.

When a currency is dying like this, it’s hard for the inflation statistics to keep up. But, as Hanke explains, we can use the exchange rate to figure out how much prices are really going up. There are a few ways to think about why this is, but the most intuitive is that a cheaper currency means higher import prices, which spills over to the rest. In any case, this tells us that Ukraine’s annual inflation is already 272 percent, and, even worse, is picking up speed. Indeed, its monthly inflation rate is 64.5 percent—which translates to 39,000 percent inflation over a year—more than enough to qualify it for “hyperinflation” status.

The good news, if there is any, is that the IMF money should stabilize Ukraine’s currency, and with it their inflation. The not-so-good news, though, is that even with this money Ukraine will still have to do a lot of austerity. And the bad news is that it will have to really raise rates, knee-capping growth even more, to rein in the inflation it already has. (Higher rates should also mean a higher hryvnia, but that may not be the case, as Paul Krugman explains, if they hurt the economy so much that foreign currency debts are harder to pay back). Everything that would save Ukraine’s currency, in other words, would make its economy worse in the short-term. But it can’t have a decent economy in any term if it doesn’t stop its currency’s free fall. So even if everything goes right, Ukraine’s in for a lot of pain.

There are no good choices when you’re bankrupt. 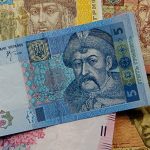 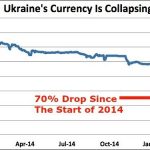