Global wheat and corn futures surged earlier on Monday as tensions in Ukraine stoked fears of disruption to shipments from the Black Sea, one of the world’s key grain-exporting zones.

Ukraine called up army reserves on Sunday and Washington threatened to isolate Russia economically after Russian president Vladimir Putin declared he had the right to invade his neighbour if the situation worsened there.

“I don’t see major problems with the sowing (campaign) as of now,” Ihor Shvaika, Ukraine’s agriculture minister, told Reuters on Monday. “We will do everything so the area for spring grains does not fall and it will not fall.”

Some traders have been reluctant to enter into new contracts while tensions between Ukraine and Russia are escalating, Shvaika said. “We are doing everything to resume the process,” he added.

Traders are holding back from new contracts with the risks for Ukraine’s 2014 grains harvest rising due to the turmoil, low liquidity and rising fuel costs, a Moscow-based grain trader said earlier on Monday.

“If there is a risk that a tank appears in your field, you would think twice before you start sowing,” the trader said.

“Farmers could try to sow as much as they can, but there will be a problem with indebted large holdings and a lack of turnover capital,” he added.

The U.S. Department of Agriculture forecasts that Russia and Ukraine will export a total 26.5 million tonnes of wheat in the 2013-14 marketing year, or 17 percent of global shipments. In corn, Ukraine alone is forecast to export 18.5 million tonnes, or 16 percent of total global exports.

It has sown 68,450 acres to early spring grains as of March 3, according to official data.

Despite turmoil, shipping from Ukraine is continuing as ports are operating normally, the country’s ports representative said on Monday.

Ukraine’s grain exports edged up 1.3 percent to 2.82 million tonnes in February thanks to a higher shipments of wheat, the agriculture ministry said on Monday.

The ministry said in a statement Ukraine exported 2.33 million tonnes of corn and 414,800 tonnes of wheat last month. It said that Ukrainian grain exports totalled 340,000 tonnes of grain in the first three days of March. 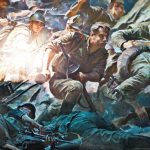 David Stahel’s ‘Kiev 1941’ and ‘Operation Barbarossa and Germany’s Defeat in the East’Russia, Ukraine
News of Ukraine on March 6, 2014Digest, Ukraine