By New Cold War
Posted December 10, 2014
In Digest, Ukraine
Ukraine goes underground: Families living in cellars in Donetsk feel they have been abandoned by the government in Kiev2014-12-102014-12-10https://newcoldwar.org/wp-content/uploads/2020/05/2020-NCW-Logo-New.pngNew Cold War: Know Betterhttps://newcoldwar.org/wp-content/uploads/2014/12/Families-living-underground-in-the-city-of-Doneetsk-Dec-2014-photo-by-The-Independent.jpg200px200px

Ilona already knows the sound a bomb makes. The three-year-old is keen to impress that she can tell the difference between a mortar and the thud of the trap door, which periodically slams shut above her head.

The other children in the bomb shelter are even more knowledgeable. They know what a “Smerch” rocket is, and how it differs from the smaller “Uragan” and larger “Tochka-U” missiles. The boys explain how the rattle of machine gun fire can be differentiated from mortars, and from rocket launchers. 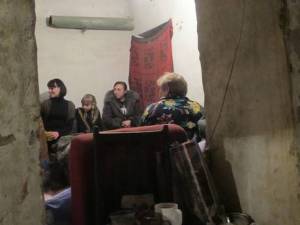 There are 40 adults and 12 children living in the damp and cramped cellars of one house on Kosareva Street in Petrovsky district in west Donetsk. Three of the children in the bomb shelter are now sure they want to become war journalists. Two are eyeing jobs as soldiers, and one wants to be an aid worker.

This week is a landmark of sorts for them, marking five months of life underground.

Their home in Petrovsky is the last settlement before a buffer zone between rebel-controlled Donetsk and its suburb Marinka, which has been seized by government forces. The district is one of the most dangerous in all Ukraine. Almost half of the concrete residential blocks have been damaged. It remains too risky to spend long periods above ground. Nearly all the adults in the shelter have stories of a friend or relative dead or maimed. And all understand their temporary home offers little protection in the case of a direct hit.

Ukraine crisis: A timeline of the conflict. 12 photos and accompanying text. Go to weblink above to see the timeline.

Natalya Leonidovna, 59, tells The Independent that her sister and husband had been killed during fierce fighting in August. “Life is not without difficulties down here, but it gives us the best chance of staying alive,” she says. “My sister and her husband died: all they did was go out into the courtyard, and it was wrong place and wrong time.”

The adults do their best to keep the children active and amused, though depression is written across their faces. Some continue to work, mostly in the local mine, where salaries haven’t been paid for months. Pensioners have not received any payments since July. Some need medication, but it is either unavailable or too expensive. Temperatures regularly drop to an unseasonable minus 22C.

In the absence of legitimate government, self-organised local volunteer groups are doing their best to fill the void. The “Responsible Citizens of Donbass” – an unlikely union of independent journalists, local politicians and businessmen – is the most visible of these ad-hoc formations. Every day, the team of volunteers brave missiles and icy roads to deliver blankets, clothes, basic medicine, food and children’s toys. They are a lifeline for many thousands of people across Donetsk.

Evgeny Shibalov, a journalist for one of Ukraine’s most influential newspapers Dzerkalo Tyzhnia, is one of the original five “responsible citizens”. He says the group was formed in response to Kiev’s withdrawal from the region – a position “driven by short-term politics, ruthlessness and an incapacity for discussion”.

The decision to stop pension payments has been disastrous. Mr Shibalov says: “Kiev seems to be fighting for territory alone; it has forgotten about the people.”

There is talk of yet another “ceasefire” in the city this week, but the evidence on the ground is thin.

The underground residents of Kosareva Street say shelling has intensified over the last seven days. And even when artillery battles eventually die down, they face a long road to normality. “War chips away at the confidence – and then fear begins its work,” says Dr Ivan Moskovoi, head doctor at the local psychiatric hospital.

It is not the first time that Dr Moskovoi has experienced a humanitarian crisis. Back in 1986, he was one of a group of medics sent to Chernobyl to administer emergency psychological support to the local population.

Then and now, he observes, he saw people go one of two ways. There is a first group – full of bravado – that quickly gets used to the situation. “These are the guys who eat fish from the river without thinking, and die soon afterwards,” he recalls. The second group responds through fear and stress. “This group develops debilitating mental illness.”

The psychiatric hospital came under attack in December by missiles probably fired from the north-west, where Ukrainian forces were based. Staff did what they could to repair the hospital, but the building remains without central heating. Patients huddle around a single stove to keep warm.

The shelling is the latest in a series of disasters for the patients, many of whom are struggling to process the conflict. “Healthy people can develop coping strategies, but mentally ill people have a tendency to become terrified,” says Dr Moskovoi. One patient became so scared that he decided to attack a pro-Russian fighter when he went home for the weekend. “I won’t tell you what happened next,” Dr Moskovoi adds.

The idea of keeping a psychiatric hospital open in an active war zone could be viewed as ill-advised. Kiev authorities had mooted the idea of moving the hospital from Donetsk, but have offered no assistance in moving. It is, Dr Moskovoi says, the “definition of madness”. Kiev stopped paying staff salaries in October; his Chernobyl pension was also blocked.

After five months under artillery fire, much from Ukrainian positions, and the cutting of welfare payments, few in Donetsk’s Petrovsky district remain well-disposed to the Kiev government. In Donetsk there was a constant refrain by all those we spoke to: “When will the war end?” they asked. On Tuesday, the country’s President Poroshenko hopes to have an answer as ceasefire talks once again resume. 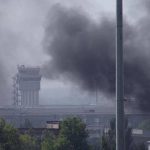 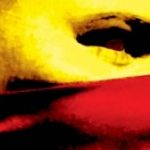