VELYKI PRYTSKY, Ukraine— Looking on from her vegetable patch at the motorcade of U.S. Secretary of Commerce Penny Pritzker, Ukrainian villager Olha Voloshchenko says she’d seen the lady on the TV news the night before, but “then the lights went off at our place”. 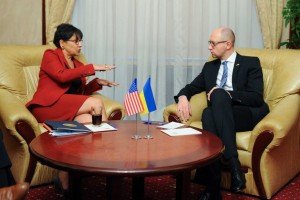 The U.S. hopes agriculture in places like this dilapidated village will help rebuild Ukraine’s shattered economy as the country severs its centuries-old trade relations with Russia and tries to integrate with the West.

The economic reality, however, suggests that dream is a long way off. A lack of jobs often drives young people away from the rural areas that are meant to drive the agricultural renaissance. Outages are common as the electricity grid crumbles from a lack of investment and bribery is still rampant. It is clear Ukraine will depend on U.S. and European financial support for years to come.

Pritzker’s visit coincided with the U.S. announcement that it would give Ukraine another $1 billion in loan guarantees on condition the country makes a series of reforms. That comes on top of a $17.5 billion aid program from the International Monetary Fund.

The U.S. official was in Ukraine to help the government push through judicial and anti-corruption measures that would, hopefully, attract the investment needed to wean the country off Western aid. In an interview with The Associated Press, Pritzker called the U.S. administration’s decision to give the loan guarantee “a vote of confidence.” She said the Ukrainian government’s progress on reforms over the last six to nine months was “extraordinary.” 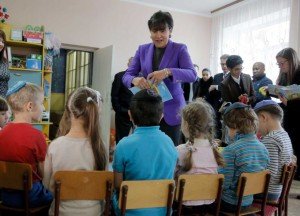 For Pritzker, her visit mixed old-fashioned commercial diplomacy — bringing a group of U.S. business executives along — and the personal. Until the late 19th century, long before the family built the Hyatt brand into a global hotel chain, the Pritzkers lived south of Kiev and took their name from Voloshchenko’s village of Velyki Prytsky.

During her stay in Ukraine she would have gotten a taste of the challenges facing Ukraine, whose economy is expected to shrink by about a tenth this year.

Though the conflict in the rebel-held east has quietened down in recent months, much of the country’s industrial heartland is either in the hands of Russia-backed rebels or has seen its supply chains disrupted. An anti-corruption push has yet to claim any prominent scalps and Sunday’s [October 25] regional elections [reading below] saw the resurgence of regional oligarchs that often challenge the government in Kiev.

Meanwhile, trade with Russia, which has long been the country’s biggest commercial partner, is in freefall as political relations soured over the conflict. Goods exports to Russia in January-August this year were less than half what they were a year earlier, and replacing that lost trade will be hard. Since October 25, there are no longer any direct flights between the two countries. 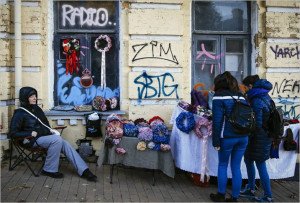 Despite a frantic schedule of trade missions from the Ukrainian government, exports to the U.S. and EU are falling too, with increased Chinese investment in agriculture a rare bright spot.

Instead of restoring Russian trade to pre-conflict levels, the goal is an economy close to that of neighboring Poland, with greater European and global integration, says Finance Minister Natalie Jaresko. “I don’t think those levels of trade with Russia will ever come to be again,” she says. “We are building our exports into Asia, into Europe and into the Middle East and North Africa.”

Also on the horizon is the repayment of a $3 billion debt to Russia dating from the final days of the last pro-Russian Ukrainian president, Viktor Yanukovych. Russia has refused to write off a part of the loan, as Ukraine’s other bondholders agreed to do this year to help the country avoid default. [reading below] If Ukraine fails to pay the loan at the end of the year, Russia could try to obstruct future aid to Ukraine from the IMF, of which it is a member.

With a heavily devalued currency and the government making aggressive spending cuts, there is also the danger of public discontent. Outside the cabinet building in Kiev where Pritzker held talks Monday, is a small protest camp organized by the populist Radical Party under the same “Maidan” name as the protests which led to the ouster of Yanukovych in 2014.

While the camp shows little indication it could spark a mass movement, Jaresko admits that public discontent is a concern. “I worry about it all the time but I think instead of worrying about it, what we need to do is to respond to it,” she said, speaking with the AP in a room overlooking the camp. “We need to provide the population with not only austerity measures, which are critical for restoring the stability of the economy, but also a return of quality public services.”

Jaresko argues that efforts to reduce government bureaucracy and fighting tax evasion have seen progress but flown under the radar in terms of public opinion.

An IRI poll conducted in July found 51 percent of Ukrainians thought corruption was worse than before Yanukovych’s fall from power, with only 11 percent saying the situation had improved.

Reducing corruption is also a key factor in attracting foreign investment. Reforms and changes of personnel have broken down old hierarchies of bribery but corruption is still rampant across society, argues Balazs Jarabik, an analyst with the Carnegie Endowment. “Corruption is much more decentralized,” he says. “When you ask businesses … everybody who is kind of directly engaged is very much dissatisfied.”

Still, the international support for Ukraine is broadly welcome. In Velyky Prytsky, some locals saw Pritzker as a potential savior, her very presence a sign of jobs and investment to come. “If people like this have come to us, then we’re in seventh heaven,” said Natalia Foyalo, who has worked in the village school for 33 years as cook, cleaner and general employee and greeted Pritzker in Ukrainian national costume.