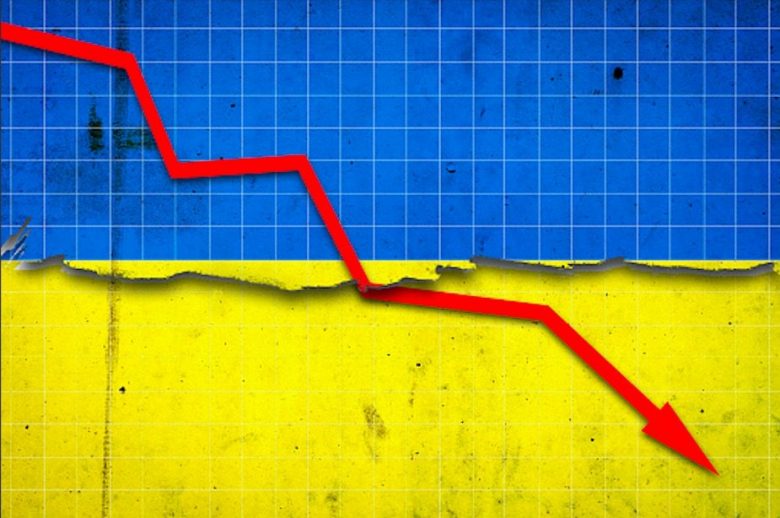 Fall of the Ukraine Economy

Prepared by Renfrey Clarke for the New Cold War website, this analysis describes the dire economic crisis currently facing Ukraine, the multiple and historical reasons why this is happening, the increasingly remote prospects of a bailout and in the event of one materializing, it being nowhere near sufficient to prevent the country’s economic collapse.

Data reported in recent months have shown Ukraine’s state finances to be under extreme stress, as steeply falling economic output causes tax revenues to sag. With foreign financial support inadequate, the government in Kyiv has turned to the printing press to plug huge gaps in the national budget. The country is now at high risk of slipping into hyperinflation if its war with Russia continues through the winter.

The Ukrainian Economy Ministry recently estimated that the country’s GDP in September was down by 35 per cent compared to one year earlier. Massive cuts to electricity supplies due to Russian missile attacks since September suggest that by the end of 2022, the decline in economic output could approach 50 per cent.

Five million people have now fled the country, and a further seven million are internally displaced. Of the latter, few have been able to find new jobs, and as reported by the Wall Street Millennial site, the official unemployment rate has now reached 35 per cent.

On August 27 a report by the German state broadcaster Deutsche Welle entitled ‘Ukraine battles to avoid hyperinflation as war costs soar’ noted that tax revenues had collapsed to about one fifth of their pre-war level and were covering only about one third of the government’s expenditures. To make up this shortfall, the Kyiv authorities have been seeking foreign loans and grants, and attempting to borrow on the local market.

However, only the most deep-pocketed and ideologically committed supporters are willing to lend Ukraine money—and even their generosity is being strained. The grants and loans are proving nowhere near enough to fill the holes in Kyiv’s budget.

Ukraine’s international backers, according to International Monetary Fund Managing Director Kristalina Georgieva, have committed US$35 billion in financial aid to the country in 2022, a figure of about $3 billion per month. Meanwhile, the Financial Times cites a figure for the Ukrainian government’s budget deficit of “at least $5 billion per month,” while the Wall Street Millennial site puts the monthly shortfall at no less than $9 billion.

Ukrainian GDP is now probably running at an annual figure of less than $140 billion. The above data thus suggest that even with outside financial aid factored in, the country is running a hair-raising state budget shortfall, unbacked by grants or borrowing, of at least 17 per cent of GDP—and perhaps much more.

Surely, one might think, Ukraine’s government would try to balance its books, at least in part, by raising its income tax take? Currently, the country imposes a “flat tax” of 18 per cent on all personal incomes, plus a “military levy” of 1.5 per cent. But ending the super-low tax regime that applies to Ukraine’s rich would almost certainly have little effect on revenues. Much of the reason for the low taxes—apart from neoliberal dogmas—has been that Ukraine’s oligarchic ruling class is skilled at concealing its income. The low income tax rates are designed to make this tax-dodging only marginally worthwhile.

The oligarchs have financial resources that could help repair the government’s finances, at least for a time. Efforts to induce the country’s rich to lend to the state by buying government bonds, however, are clearly falling flat. Ukraine’s wealthy have a long history of reacting to economic crises by sending their money abroad through exotic and nefarious schemes.

In these circumstances, the Kyiv government’s only choice has been to sell its bonds to the National Bank—in effect, to print money. In June alone, Deutsche Welle cites the Financial Times as reporting, the printing presses created the equivalent of $3.6 billion. This mass of extra buying power is certain to fuel increasing levels of inflation.

To continue buying essential inputs from abroad, Ukraine is meanwhile having to deplete its reserves of foreign exchange. As of September, about US$6 billion of an earlier $31 billion had been drawn down. To slow the attrition, strict currency controls have been imposed. At present, there is a ban on transferring foreign currency abroad to repay and service debts owed by Ukrainian businesses to non-residents. While this may aid in keeping the country technically solvent, its effect on the willingness of foreign firms to conduct business with Ukrainian companies can be imagined.

Not surprisingly, inflation in Ukraine has mounted steadily during the months of war, from an annual rate of seven to eight per cent at the beginning of the year to 24.6 per cent in September. In July the rising prices forced a 25 per cent devaluation of the national currency, the hryvnia, which had been pegged to the U.S. dollar. By keeping dollars cheap, the peg had strengthened the hryvnia and restrained inflation. With devaluation, this restraint was substantially loosened.

Inflationary pressures on the hryvnia are certain to mount much further in coming months. To a large extent this will result from the combination of a booming money supply with the falling quantities of goods available on the war-ravaged domestic market. But as winter approaches, another factor will kick in: the need to secure gas supplies for industry and domestic heating.

As of 2019, Ukraine was having to import about a quarter of the natural gas it needed to meet consumption. In mid-October the Wall Street Millennial site reported that European gas prices were at “more than ten times their normal levels.” For Ukraine to import sufficient gas for the winter at current prices, the site calculated, would cost about US$7 billion. This would require a devaluation far greater than the 25 per cent seen in July. On the basis of experience during the economic crisis that followed the Maidan revolt in 2014, the site suggested, the figure would need to be as much as 70 per cent.

The implications of this are horrifying. According to the above site, “[it] means they will have to print three times as much money to achieve the same purchasing power.” In these circumstances, a slide into hyperinflation would, the site’s author concluded, be “all but guaranteed.”

Hyperinflation is commonly understood as inflation of more than 50 per cent per month or 1000 per cent per year. In these circumstances, the national currency essentially dissolves as a store of value. Savings vanish, and the buying power of people on fixed incomes collapses. Anyone who holds the local money does their utmost to turn it into material goods or foreign currency as quickly as possible. Store shelves are quickly stripped, with merchandise finishing up piled in the dwellings of people who would normally have little need of it; meanwhile, people who genuinely need the goods must often go without.

For employees of the enterprises that remain open, turning up for work under the conditions of hyperinflation can make little sense; the returns tend to be far better if the time is spent hustling on the street. For many purposes, the local currency is replaced by barter, with all its inefficiencies, or by foreign banknotes. The economy becomes ‘dollarised,’ and concluding any substantial deal requires wads of foreign cash.

For a country in this condition to prevail in a war is almost unimaginable. So will Ukraine’s sponsors and allies now bail it out? The prospect seems remote. According to the Kyiv Independent, Ukraine in September was negotiating to receive $1.5 billion per month from the US, and $1 billion from the EU. A further $12 billion, to be paid out over an unspecified period, was being sought from the IMF. In blog postings, there is widespread agreement that this backing, even if it materialises, will be nowhere near sufficient.

At a time when Western economies are in severe crisis, the chances that NATO governments will massively boost their aid to Ukraine have to be seen as negligible. As reported by The Guardian, the dispensing even of the financial assistance promised to date is far behind schedule. Meanwhile, relatively little of the funding promised to Ukraine has been in the form of grants. As much as 80 per cent of the sums has consisted of loans, repayable with interest.

For Ukraine’s backers in the NATO governments, making donations of ageing military hardware is one thing. But major financial sacrifices, in a period of slumping profits, are something else entirely.

For the Ukrainian masses, there are lessons in the fact that the NATO governments seem ready to allow them to die of cold in unheated apartments or to suffer the traumas of economic collapse. By this point in the war, working-class people in Ukraine have nothing to gain from being foot-soldiers in Washington’s imperial project of “fighting Russia to the last Ukrainian.”

The need is for a negotiated end to the fighting. This will cost territorial losses to Ukraine, but the longer the decision to seek a negotiated peace is delayed, the weaker Ukraine’s bargaining position is going to become. 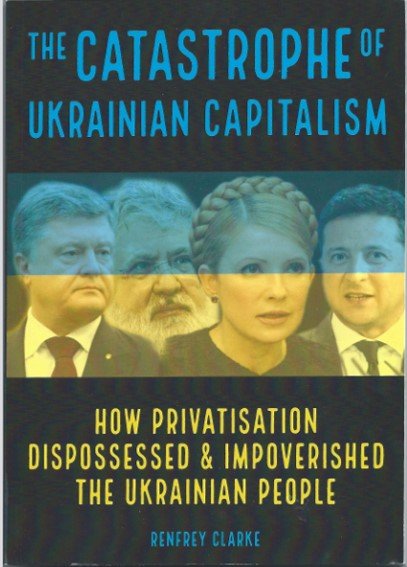 Renfrey Clarke is an Australian writer and translator. He spent the 1990s as Moscow correspondent for Green Left Weekly, of Sydney. He is the author of the new book, ‘The Catastrophe of Ukrainian Capitalism: How privatisation dispossessed and impoverished the Ukrainian people,’ published by Resistance Books, June 2022, 176 pages. $AUS 25. You can order the book here. In 2016 he co-authored the lengthy essay ‘The myth of ‘Russian imperialism’: in defence of Lenin’s analyses’. 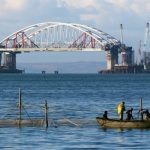 A war Russia set to win: the Europeans have been nicely played by the AmericansIndia, NATO, Russia, Ukraine, USA 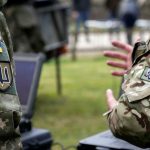 The causes of the war in Ukraine – a reply to Simon PiraniBritain, NATO, Paul Atkin, Ukraine, USA