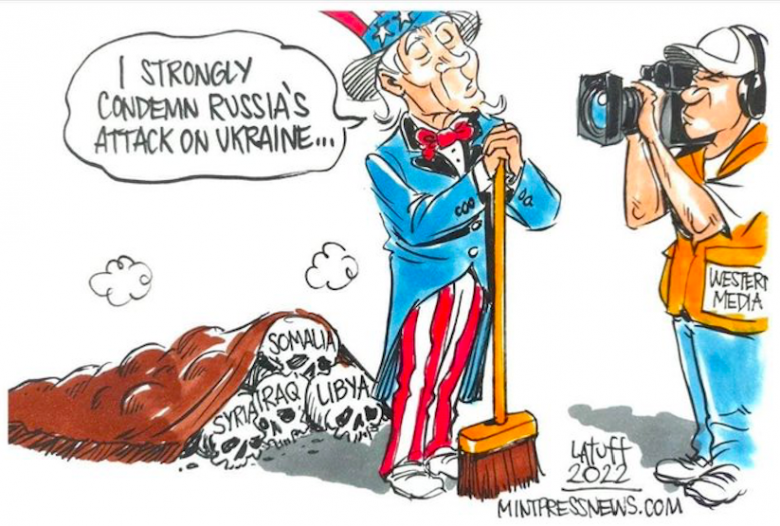 By now everyone knows that Ukraine’s flag is blue and yellow. It is impossible to miss as the Empire State Building in New York, the Brandenburg Gate in Berlin, and the Eiffel Tower in Paris have all been bathed in those colors. Nearly every city and town across the United States has followed suit and politicians ranging from local legislators to members of congress shout “Stand with Ukraine!” at every opportunity.

White supremacy is at the heart of US war propaganda. The exhortation to “stand with Ukraine” is no exception to this rule.

By now everyone knows that Ukraine’s flag is blue and yellow. It is impossible to miss as the Empire State Building in New York, the Brandenburg Gate in Berlin, and the Eiffel Tower in Paris have all been bathed in those colors. Nearly every city and town across the United States has followed suit and politicians ranging from local legislators to members of congress shout “Stand with Ukraine!” at every opportunity.

Yet it must be pointed out that those blue and yellow motifs and pleas for solidarity are all about white supremacy. Ukraine is upheld as a bastion of “civilization” which is supposed to put it off limits for war and suffering. The quiet part is now being spoken out loud. We are told that Ukrainians are more deserving of concern because they are Europeans.

Ukraine’s deputy chief prosecutor said as much in a BBC interview. “It is very emotional for me because I see European people with blue eyes and blonde hair being killed…” He wasn’t alone in his assessment. An NBC reporter was asked why Poland was willing to admit Ukrainians even as it turned away other refugees. “Just to put it bluntly, these are not refugees from Syria, these are refugees from neighboring Ukraine. That, quite frankly, is part of it. These are Christians, they are white, they’re … um… very similar to the people that live in Poland.”

CBS followed suit, “This isn’t a place, with all due respect, like Iraq or Afghanistan who has seen conflict rage for decades. This is a relatively civilized, relatively European – I have to choose those words carefully – city where you wouldn’t expect that or hope that it was going to happen.”

The narrative that only white people deserve peace and security is all the more shameful because the global south suffers from war and privation as a direct result of US/NATO actions. It is NATO that destroyed the nation of Libya, NATO which attempted to do the same in Syria, NATO that occupied Afghanistan, NATO which wages war across African countries with US, French and British troops deployed across the continent. The white world causes suffering and then says that the people of the global south are “uncivilized” with no rights that need to be respected.

A Watson Institute of Brown University study showed that more than 37 million people in North Africa, Western and Central Asia, and the Horn of Africa have been displaced by the US and its allies since 2001. The humanitarian disasters begun years ago are ongoing, as refugees use the Mediterranean and even the US border with Mexico as points of escape. After experiencing wars of aggression these nations are then subjected to punishment as the United States steals Afghanistan’s assets and keeps Syria under the thumb of Caesar Sanctions. These thefts cause more suffering and even death as nations are robbed of the ability to care for their people. Who is civilized and who is not?

Ukraine has been pushed to the forefront of American thought in order to defend the imperialist foreign policy which led to the current conflict with Russia. If the blue eyed nation is suffering it is because of US and NATO arrogance and aggression. Ukraine’s current situation is a direct result of the 2014 coup engineered by the US and its EU partners. An elected president was dispatched and a civil war began that has killed some 14,000 people. Ukraine is a US colony with a puppet government now under military attack. Ukrainians are themselves refugees as they flee to neighboring Poland, Romania, Slovakia and other countries. It is the supposedly advanced, democratic, and supposedly civilized who have created their problems.

Yet once again bare faced racism is evident. African migrants and students in Ukraine were prohibited from boarding trains and buses that could take them to safety. A group of Jamaican students was forced to walk 20 kilometers when they were forced off of a bus enroute to Poland. Africans and Jamaicans live and study all over the world because the US and Europe underdevelop their nations through a variety of means. Yet Ukrainians and Poles didn’t see people in need of help. They determined that the non-blondes were not deserving of assistance.

Ironically, it is the white supremacist underpinnings of US/NATO foreign policy which has created all of Ukraine’s suffering. The need to dominate, to “contain” Russia and its ally China is not playing out the way they had hoped but the Ukrainians be damned. The MinskII agreement which was unanimously approved in the United Nations Security Council was a roadmap to peace. Ukraine should be a neutral nation but that is the exact opposite of what its lords and masters in Washington want. The good faith negotiations that could resolve the crisis are a non-starter because NATO is a very dishonest broker.

The corporate media have joined the state in an extraordinary effort to create war propaganda. They deliberately tug at heartstrings and demand solidarity with Ukraine because the truth is very unpalatable. Instead of standing with Ukraine, Americans should stand with humanity across the world. If they did they would be better able to understand why there are wars in Europe or anywhere else. 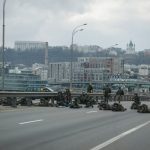 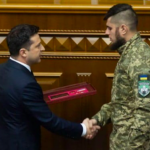