Ukraine continues to use cluster weapons against civilians

Last October, the New York Times and Human Rights Watch each issued unsettling findings that detailed the use of cluster weapons by the armed forces of Ukraine against the civilian populations in eastern Ukraine. Now we read in recent days that use of such weapons has continued unabated. The latest news comes from the Special Monitoring Mission (SMM) for Ukraine of the Organisation for Security and Cooperation in Europe (OSCE). Enclosed below is the text of a report by the OSCE dated Feb. 3 on findings of recent use of the gruesome weapons. 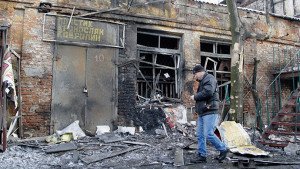 Shelling of a shop in Donetsk, Jan 15, 2015, photo by Alexander Ermochenko, Reuters

Human Rights Watch issued a statement on February 4 responding to the latest findings of the OSCE. It says, “It is disturbing that Ukraine still uses cluster munitions, given the international condemnation of its earlier use. Journalists documented remnants of cluster munitions last July, and during an October field mission, Human Rights Watch documented use of the weapon in urban and rural areas by government forces and likely by Russia-backed separatist forces… Although the Ukrainian government appeared to take some steps to investigate Human Rights Watch findings – presented to civilian and military authorities in Kiev – its investigation was inadequate.”[1]

The findings of the OSCE are unassailable because the agency is known for its bias against the political autonomy movement in eastern Ukraine and its self-defense forces. The reader of OSCE reports will notice the quotation marks it places around any use of the terms ‘Donetsk Peoples Republic’ and ‘Luhansk Peoples Republic’. That’s because the OSCE does not recognize these political entities as legal or legitimate, even though they were born of popular referendums held in May 2014. This is in contrast to the OSCE’s recognition and cooperation with the governing regime in Kyiv which came to power through the violent overthrow (coup) of the elected President Victor Yanukovych last February 2014.

The reports of continued use of cluster weapons by Kyiv are deeply disturbing to democratic and humanitarian opinion in the world. But the governments of the NATO countries and the near-totality of the mainstream media outlets in those countries are unmoved. They have systematically ignored the reports of use of cluster weapons as well as other war crimes that Kyiv has systematically been conducting since last April, namely, the shelling of towns and cities in eastern Ukraine and the consequent depriving the civilian populations there of provisions of food, water, electricity, communication, home heating, sanitation and medical supplies, not to speak of the safety and security of children.

Speaking of children, schools and hospitals have routinely been struck by Ukrainian shells. Children in targeted towns and cities have been subjected to months of living in underground bomb shelters. Last October, Ukraine President Petro Poroshenko vowed in a speech in Odessa that his government’s war will continue and “their children will [continue to] sit in shelters”. The sad story of the fate of Donbas children is depicted in the photo-journalism project of the Russian newsmagazine Novaya Gazeta, titled ‘Children of War‘ and reported on this website last month.

What is the response of the U.S. and its NATO military alliance to all the carnage and suffering in eastern Ukraine? The U.S. at least, wants to deepen the suffering by providing ever more lethal weaponry and training to Kyiv’s army and right-wing and neo-Nazi militias. All this while Ukraine’s economy and currency crashes—the hryvnia has reached an all-time low at 24.5 to the dollar.

So welcome to the new world of the NATO-driven new cold war. In such a world, things which held true in the past (well, at least to which were paid lip service)—an independent and inquiring media, human rights, governments that protect their citizens from wanton killing and maiming—no longer hold true.

The victims of this new world order require our utmost solidarity. The people of Ukraine need an end to their government’s war. They deserve a political settlement that will recognize self-determination for the people in the east of the country as well as in other regions.

Note by New Cold War.org:
[1] Neither Human Rights Watch nor any other agency or news outlet has documented claimed use of cluster munitions by self-defense forces in eastern Ukraine.

At approximately 18:15hrs and 22:45hrs on 27 January, the SMM, based in Luhansk city centre (“Lugansk People’s Republic” –“LPR”-controlled), heard intensive incoming shelling and impact explosions about 5km west of its location. On 28 January, upon receipt of information about shelling from the Russian Federation Armed Forces staff, assigned to the Joint Centre for Control and Co-ordination (JCCC) in Luhansk city, the SMM departed to the south-western suburbs of the city at 10:30hrs.

Upon their arrival at 10:40hrs on 28 January the SMM observed that a large residential area in the Artemivskyi district of Luhansk city, 6.6km south-west of the SMM’s location, a rectangular area measuring approximately 1.5km by 1.3km, had been impacted by rockets. The centre of the affected area around Izvestkova Street (7.5km south-west of Luhansk city centre) was most impacted.

The SMM observed the affected area along Izvestkovaya Street, Korolenko Street, Dekabristiv Street, as well as at Michurina Street and Sumska Street – a residential area consisting of small, detached houses.  The SMM spoke to the owners of the properties and other local residents who said that they had been shelled twice on 27 January, first at about 18:10hrs and at about 22:45hrs.

The SMM saw considerable damage caused by the impacts of rocket shelling, such as broken windows, fences, gates and walls. The SMM assessed that some of the damage to the buildings, e.g. a series of parallel rows of strike marks on a gate and wall, were consistent with damage typically caused by shrapnel elements from cluster munition. According to the SMM’s assessment, a hole in a roof of a house was caused by the impact of what appears to be a bomblet, with small calibre.

The SMM discovered parts of rockets, including engines, fins and cargo compartments, in the front and backyards of several houses; the cargo compartment in particular is typical of a rocket carrying cluster munitions. Some parts sighted by the SMM at the impact site (1.5 cm white metal fragments, 6 by 3 cm black metal fragments of bomblets cases) are typical for cluster munition. The SMM identified them as parts consistent with 9M55K model “Smerch” rockets (calibre 300mm). The SMM observed a crater (diameter approximately 4m, depth approximately 3m) at the backyard of the house located at Dekabristiv Street 106 which had been caused by the explosion of a “Smerch” rocket, according to the SMM’s assessment.

Local residents of the impacted area of Artemivskyi district told the SMM during its visit on 28 January to the site that one man was killed in his residence at Korolenko Street 33. The JCCC and the “emergency services department” of the “LPR” both confirmed the same casualty figures.

The SMM met, on 30 January, the deputy head of the central regional hospital who confirmed that two persons wounded on 27 January were still staying in hospital for surgery and medical treatment. On 3 February the hospital confirmed to the SMM the information previously received.

For PDF attachments or links to sources of further information, please visit: http://www.osce.org/ukraine-smm/138906