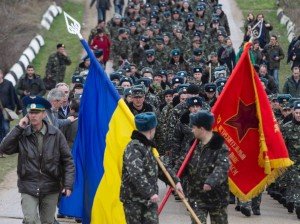 Ukraine army under the red star in Crimea, March 2014

Here’s an irony. After the Russian military takeover of Crimea in February-March 2014, Ukraine army units stationed in Crimea were allowed to evacuate the peninsula with their battle standards intact. There are numerous photographs which attest to this fact. In this way, Ukraine troops albeit technically defeated could preserve an amount of basic soldierly dignity.

The photographs of the Ukrainian army retreat, however, also reveal that at least some battle standards of Ukraine army date to World War II and are made in the Soviet style. As such, the banners run afoul of the Ukrainian new ban on Soviet-era symbols. Therefore I assume such banners have been replaced or are in the process of being replaced. 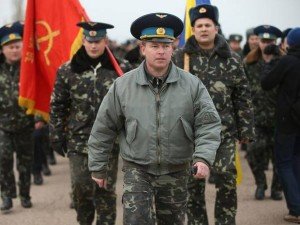 This makes for a supreme contradiction. Supposedly, Russians are the big enemies of Ukraine and the Ukraine army. However, the Russians in their takeover of ethnic-Russian Crimea went out of their way to avoid casualties among Ukrainian servicemen and also permitted them to keep their battle standards. The post-Maidan government, however, has now stripped the army of the same Soviet-inspired battle standards that the army had withdrawn with from Crimea.

In other words, Russians have been far more sensitive to the dignity of Ukraine army than the politicians in Kiev who have delinked it from its greatest source of heritage and tradition – the great struggle of World War II to which Ukrainians had given so much.

Simultaneously, with the incorporation of right-wing paramilitaries into the army, different types of battle standards have been brought into the force whose connection to Ukrainian military tradition is far more tenous if not non-existent.

Here is the neo-Nazi ‘Azov’ Battalion parading through the city of Mariupol on June 13, 2015:

Here is the symbol of the 2nd SS Panzer Division ‘Das Reich’ of Nazi Germany:

And here is the symbol of the ‘Azov Battalion’: 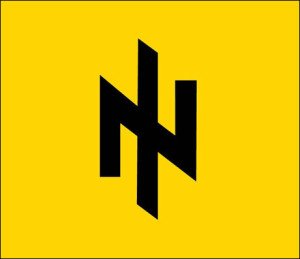 At least real Ukrainian military tradition of World War II continues to be honored by one Vladimir Putin: 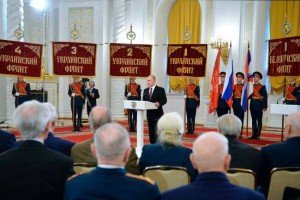 Vladimir Putin speaking before the banners of 1st, 2nd, 3rd and 4th Ukrainian Fronts of WW2