The U.S. war has been good for President Putin and the Russian economy looks stable through the 2018 presidential election. So if you are a U.S. warfighter, what is the regime change opportunity now?

By John Helmer, published on his website Dances With Bears, March 23, 2017 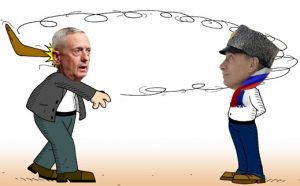 The Russian economic recovery went sharply into reverse in February, according to the latest report from Rosstat, the federal state statistics service. But voter approval for President Vladimir Putin remains super-stable at a level unknown in Europe or the rest the world. So if you are bent on fighting Russia, as the generals now in charge of US policy in Washington say and do, what opportunity is there for toppling Putin before the presidential election due in March 2018?

So if you are bent on fighting Russia, as the generals now in charge of US policy in Washington say and do, what opportunity is there for toppling Putin before the presidential election due in March 2018? One veteran of high-level Russian policy in Europe predicts: “The trouble for Putin will come when the World Cup starts in June of next year. But that’s after he is elected in March.  Noone realizes, not yet, how much trouble the football competition will cause, with thousands of visa-free foreign agitators in the country calling themselves fans, and half a billion people watching on TV.”

An analysis just released by Uralsib Bank analyst, Alexei Devyatov, of the latest economic results shows that for most Russians real income growth has not only stalled —  the indicator has started to fall again from positive 8.1% in January to minus 4.1% in February…

Read the full article, with extensive charts, at the orginal weblink above.

When corruption is state strategy in Russia’s near-abroad, the U.S. leads, Russia plays catch-up, published on Dances With Bears, March 28, 2017