WASHINGTON — The United States has voted against a yearly resolution that condemns the glorification of Nazism, though it doesn’t like Nazis [sic]. 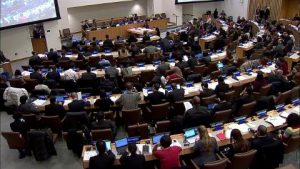 The resolution calls on all UN member nations to ban pro-Nazi speech and organizations and to implement other restrictions on speech and assembly. That is a non-starter in the U.S., where First Amendment protections guarantee everyone the right to say almost anything they want — even praise for Adolf Hitler’s followers.

The Russian-drafted resolution [A/C.3/72/L.56/Rev.1] was approved Thursday (November 16) by the General Assembly’s human rights committee on a vote of 125-2, with 51 abstentions. Only Ukraine joined the United States in voting “no”.

The resolution now goes to the 193-member assembly for a vote, where its approval in December is virtually certain.

Despite U.S. pressure to vote “no,” Israel supported the resolution.

Note by New Cold War.org:
As in previous years, the large imperialist countries of the world, including in the European Union, Canada, Australia and Japan, abstained on the November 16, 2017 vote of the Third Committee (Social, Cultural, and Humanitarian) of the UN General Assembly condemning Nazism and racism. Background: Canada votes ‘no’ on UN resolution condemning racism and neo-Nazism. Again, by Roger Annis, New Cold War.org, Nov 21, 2015.

*  Country sponsors of the resolution:

*  Record of the discussion at the meeting on November 16, 2017 of the Third Committee (human rights) of the UN General Assembly

The representative of the Russian Federation introduced a draft resolution titled “Combating glorification of Nazism, neo‑Nazism and other practices that contribute to fuelling contemporary forms of racism, racial discrimination, xenophobia and related intolerance” (document A/C.3/72/L.56/Rev.1).  He said the draft focused on an issue of increasing relevance.  Despite a victory over Nazism after the Second World War, there were still people looking to disregard history.  Following the war, a system of rights protections had been enshrined as a response to the trampling of human dignity.  Still, attempts had been made to deny a common history and dilute principles of international law and security.

The draft addressed relevant human rights issues, he assured, pointing to increasing xenophobia stemming from restrictive immigration policies.  He said he was appalled by pro‑Nazi demonstrations which stood as reminders of mobs during [Adolf] Hitler’s Germany.  Co‑sponsors of the draft deemed it unacceptable to glorify those complicit in Nazi crimes.  More than 70 years ago, people had summoned their strength to counter a common evil.  States had a duty to adopt the draft to respect not only those who had fought Nazism but also future generations.

The representative of Belarus, speaking also on behalf of Kazakhstan, Kyrgyzstan and the Russian Federation, among others, condemned attempts to rewrite history.  Advocating strict compliance with the outcomes of the Nuremberg process, she said the lessons of Nuremberg were relevant and that all States must commit to fighting Nazism, hate speech and xenophobia.  It was important to ensure that monuments to those who had fought against Nazism were protected.

The representative of the Russian Federation said he did not agree with the proposed amendments, as the draft resolution was the fruit of intensive discussions in which the United States had not participated.  The changes proposed would fundamentally alter the substance of the draft.  It was necessary to make a clear distinction between voicing racist perspectives and freedom of expression.

The representative of the United States said her country had expressed concern over the resolution each year since its 2005 introduction.  This year, it proposed amendments addressing every part of the text that violated individual freedoms of speech, thought, expression and association.  While the amendment did not fix every problem, it addressed the free speech issues that glaringly made the draft a “reprehensible red line” for the United States, and others.

The United States did not need to defend its position against Nazism.  Calling the draft a cynical exercise and an annual power play by one country against its sovereign neighbours, which attempted to criminalize free speech and expression without any genuine effort to combat Nazism, discrimination or anti‑Semitism, she said the solution to hate was not censorship.  It was the freedom for goodness and justice to triumph over evil and persecution.  The proposals would remove overtly problematic portions of the draft resolution which violated the freedom of expression and which had inappropriately misstated historical fact.  She urged all delegates to vote in favour of the amendment.

A recorded vote was then requested on the proposed amendment.

The representative of South Africa, in explanation of vote, said her country did not support any of the proposed amendments and considered them hostile.  She expressed appreciation to the Russian Federation for its openness in drafting the resolution.

The representative of Syria said he would vote against the amendments as they were provocative, hostile and late.

The Committee then rejected the amendments by a recorded vote of 3 in favour (Israel, Ukraine, United States), to 81 against, with 73 abstentions.

The representative of Argentina, speaking in explanation of vote, said he had abstained, noting that oral amendments should not propose such extensive changes to a draft.  He urged all Member States to cooperate transparently in the drafting process.

The representative of Estonia, speaking on behalf of the European Union, reiterated the bloc’s priority to fight contemporary forms of extremist ideologies.  He expressed regret that the draft as a whole focused on issues far from the matter at hand, and shared the United States’ view that matters of racism should be addressed in an impartial way.  The draft restricted the freedom of assembly and he acknowledged the attempt through the amendment to address shortcomings in the draft as a whole.  Still, proposed changes had not been provided far enough in advance to give them due consideration.  As such, the European Union had abstained.

A recorded vote was then requested on the draft as a whole.

The representative of the Russian Federation asked who had requested the recorded vote.

The Chair responded that the United States had requested the recorded vote.

The representative of the United States said the reasons her delegation had called for the vote were reflected in the amendments.

The representative of Senegal said his delegation was not a co‑sponsor of the draft.

The Committee then approved the draft as a whole by a recorded vote of 125 in favour to 2 against (Ukraine, United States), with 51 abstentions.

By its terms, the Assembly would express deep concern about the glorification, in any form, of the Nazi movement, neo‑Nazism and former members of the Waffen SS organization.  It would encourage States, civil society and other stakeholders to use all opportunities to counter, in accordance with international human rights law, the dissemination of ideas based on racial superiority or hatred while also deciding to remain seized of the issue.

The representative of the United States said her country condemned all forms of racism, racial discrimination, xenophobia and related intolerance and regretted having had to call a vote on the resolution.  Her country’s concerns centred around the focus on criminalizing free speech and vague references to extremism.  The United States was a partner in promoting remembrance of the Holocaust, but due to the draft resolution’s overly narrow nature, the United States could not support it.  It would propose an alternative approach next year, which would emphasize that Governments should speak out against racism, racial discrimination, xenophobia and related intolerance, and employ tools including proactive Government outreach and defence of human rights and fundamental freedoms.

The representative of Estonia, on behalf of the European Union, said the fight against neo-Nazism must be a priority.  All contemporary forms of racism should be addressed in an impartial, balanced manner, with a focus on human rights.  The European Union had engaged with the drafters to strengthen the human rights aspect of the text, he said, yet several important concerns had not been included.  Focusing the fight against racism around history-teaching or erroneous references to politically motivated issues were outside the scope of the human rights agenda.  The European Union would continue to engage with the co-sponsors to address the issue in a balanced manner, and for that reason, had abstained.

The representative of Switzerland, also speaking on behalf of Australia, Liechtenstein, Norway and another country, expressed strong support for the fight against Nazism and neo-Nazism.  The draft resolution contained some important elements in the fight against racism, racial discrimination, xenophobia and related intolerance, yet she expressed regret that some suggestions to broaden the text had not been taken on board.  Concerns also persisted with paragraphs de facto restricting the rights to freedom of opinion and expression.  For those reasons, the countries on whose behalf she spoke had abstained during the vote.

The representative of Canada condemned racism, racial discrimination, xenophobia and related intolerance, including Nazism and neo-Nazism, urging States to ratify the Convention on the Elimination of All Forms of Racism.  She expressed regret that changes proposed to broaden the resolution and ensure its alignment with internationally recognized human rights had not been included, and as such, Canada had abstained from voting.

The representative of Belarus, in a general statement, said it was necessary to keep the important matter at hand on the United Nations agenda.  The pernicious ideology of Nazism had endured, she said, adding that forces still used the freedom of opinion and expression to provoke hatred.  Belarus rejected efforts to glorify Nazism and militant nationalism, and stood against campaigns to denigrate those who had paid a high price during the Second World War.  Belarus valued peace and had therefore voted in favour of the resolution.

The representative of Azerbaijan, in an explanation of vote after the vote, said the emergence of Nazi-inspired parties raised serious concern.  The draft resolution expressed concern about erecting monuments and memorials, he said, noting that such actions negatively influenced children and young people.  He reiterated concern about Garegin Nzhdeh, who had collaborated with Nazis, saying that the younger generation in Armenia was being raised in that spirit.

The representative of Armenia said her country was a traditional co-sponsor of the resolution, committed to the fight against racism, racial discrimination, xenophobia and related intolerance.  The most dangerous form of hate was the institutionalization of racism, she said, adding that Armenia understood well the consequences of racism and ideology, having suffered the first genocide of the twenty‑first century.  Armenia would continue to promote the prevention of genocide.

The representative of Ukraine said in a general statement that his country had paid a high price to defeat Nazism, with more than 8 million Ukrainian lives lost during the Second World War.  The draft’s objective was not about fighting Nazism but sought to twist the objectives of the Nuremberg Tribunal.  During the negotiations, Ukraine had suggested edits, such as honouring all victims of totalitarian regimes and those who had perished from genocide.  Despite that the Russian Federation stated that the text aimed to stop the spread of Nazism, it continued to occupy areas in Ukraine.  Radicalism, neo-Nazism and xenophobia were on the rise in the Russian Federation and Ukraine had voted against the resolution.