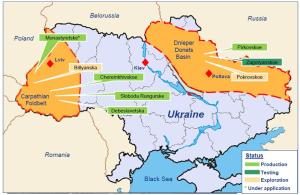 In the 20-plus years since Ukraine declared independence, the country’s governance has lurched from one corrupt group of oligarchs to the next. Transparency International ranked Ukraine 144 on a scale that sets 177 as most corrupt. Russia fares better 127 and the EU member states are all well below 100.

I point this out not to defame Ukraine as much as to ask why Ukraine is always portrayed in the western media as a “little bit of Europe” suffering under Russian tyranny. It’s worth remembering that Ukraine has run its own show since 1992, and during those 20 years, the country has treated its relationship with Russia in terms of gas imports like a teenager who wants to live off a parent, but not follow the parent’s rules.

My friends and acquaintances in Ukraine represent a rainbow of opinions: pro-Ukrainian Russians, pro-Russian Ukrainians, a couple of expats, even a guy from Lvov (a city in western Ukraine, which tends to be pro-Europe) who is married to a girl from Crimea (now part of Russia). They disagree on a lot. But they all agree on this: Ukraine’s economy never had a chance to develop, because one group of politically embedded oligarchs after another profited off the state, effectively bankrupting the country. Red revolution, Orange revolution and whatever color it was in 1992, the old bosses haven’t differed much from the new.

In the mid-1990s, I interviewed Shell’s Ukrainian country manager in Kiev. At that time, Shell was negotiating with Ukraine’s first post-Soviet government to reopen Ukrainian gas fields. Shell’s man in Kiev told me there was enough gas left to supply Ukraine’s domestic needs and to even export. But Shell abandoned the project when it couldn’t reach an agreement with the Ukrainian side. The executive I spoke with told me that the demands for payoffs had made it impossible to negotiate a deal, even though the project would have enriched the economy of newly independent Ukraine with new sources of tax revenue, new jobs, and even energy independence from Russia.

Shell returned to Ukraine only in 2013 to sign a $10 billion deal to develop shale gas in eastern Ukraine. Shell drilled two exploration wells in the Yuzivska field before fighting around Slovyansk forced it to freeze operations this spring.

Shell’s agreement in January 2013, was followed in November by a similar $10 billion deal negotiated by Chevron to develop the Olesska shale gas field in western Ukraine.

Offshore it’s a similar story. Shell, Chevron and Exxonmobil have tried over the years to develop projects there, together with Ukrainian interests. A New York Times article recently quoted experts as saying the energy potential of the Black Sea might even exceed that of the North Sea. But nothing ever really took off.

Ukraine’s inability to get its act together and take advantage of its assets has created an opening likely to be filled by North America. The U.S. has seemingly overnight moved from being an energy importer to a potentially massive exporter, at a time when Russia is struggling to maintain its position as the world’s top energy exporter in the midst of a production decline in its prolific West Siberian fields.

As the EU and U.S. discussed its first round of sanctions against Russia earlier this year, Platt’s reported that Washington had let European leaders know it was prepared to shift U.S. diesel fuel exports bound for South America to Europe, “if the price were right.” The offer was to encourage Europe to consider sanctioning Russian diesel.

In May, Spain’s Iberdrola power company signed a 20-year contract to buy $5.6 billion worth of U.S. LNG from Cheniere Energy Inc.

And as talks commenced this summer on the Transatlantic Trade and Investment Partnership – potentially the largest trade agreement in the history of the world, the Washington Post obtained a “leaked” document in which the EU pressed the U.S. to end its ban on crude oil exports. Events in Ukraine and distrust of Russia were cited as reasons.

Pat Davis Szymczak is the founder and editorial director of Oil&Gas Eurasia, a monthly, bilingual trade publication devoted to the application of western technology to Russian and CIS oil and gas fields.

Ukraine agrees to ceasefire ‘in principle’ with Luhansk rebelsDigest, Ukraine 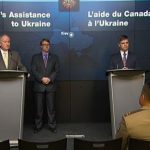 Ukraine getting $11M more in military support from CanadaDigest, Ukraine