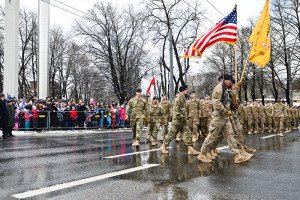 U.S. military deployments to Eastern Europe are being ramped up. The latest word as reported by the Wall Street Journal is that regular rotation of brigade-size forces with the most modern equipment will bring a de facto continuous U.S. military presence to the areas in question, which include the Baltic republics, Poland, Romania, and Bulgaria.

It is easy to see that the immediate motivation behind this measure, as Deputy Secretary of Defense Robert Work indicated to the Journal, is to calm nervousness among some of those states about what the Russian bear is up to. But there are other implications of any deployment of this nature; if there weren’t, then there would be no reason to expect the deployment to have the desired calming effect. 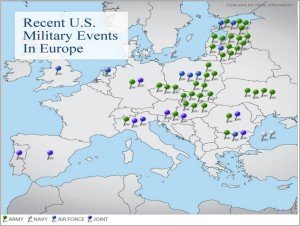 We are entitled to be told, to a greater extent than we have been told so far, just what the strategy is behind this deployment. What exactly is the threat that we are trying to meet, in more specific terms than just “Russian aggression”? What sort of scenario do we have in mind? What would be the U.S. response to such a scenario, and what role would the newly deployed U.S. troops be playing?

There has been plenty of precedent and practice in thinking about such matters. Throughout the Cold War, the conundrum of how to protect Western Europe from the feared scenario of being overrun by a huge Soviet conventional assault was never solved to a high degree of satisfaction, although the stationing of U.S. troops in Europe had a lot to do with trying to solve it. Even when the United States had a couple of hundred thousand troops in West Germany, that still probably would not have been enough to stop a determined assault by the Red Army at its Cold War peak.

Nuclear weapons often figured into the strategic thinking of the time, although again without a high degree of satisfaction. At the level of long-range nuclear weapons, there was always the question of whether the United States would be willing to risk New York and Washington to save Frankfurt and Hamburg. At the theater level, saving Western Europe from Soviet occupation would have been at best a pyrrhic victory if it meant turning much of the saved territory into a nuclear wasteland.

In the end, the reliance was largely placed on the concept of the trip-wire and on the trip-wire’s hoped-for deterrent effect. U.S. troops were the wire; their forward presence in Europe assured that Americans would be killed, and that the United States would be directly involved in the earliest hours of any European war. And the added costs and risks of escalation from U.S. involvement would, went the thinking, help deter the Soviets from starting such a war.

Perhaps the concept of the trip-wire is once more at work with these latest announced deployments. But again, it would be good to know more about the envisioned circumstances that would trip the wire. The Russians are not in a position to do anything as big as the feared pouring of Red Army hordes from East Germany through the Fulda gap into West Germany.

While being capable of less, one can imagine Russia trying something less. What about a seizure of the Baltic Republics? For several reasons, that is less likely to happen than what happened with Crimea. But even with that U.S. brigade around, Russia probably could accomplish such a seizure fairly quickly. This raises, in a different version of the old Cold War question about what the United States would be willing to risk to save Frankfurt or Hamburg, the question of what it would be willing to risk to save Vilnius or Riga?

The mere fact of NATO membership of the Baltic Republics and the application of the commitment to them under Article V of the North Atlantic Treaty already raises this issue. Having troops on the ground makes this question more acute.

Of course, we in the public cannot be expected to have every contingent U.S. response spelled out in detail and with certainty. Deterrence often depends on sowing some doubt in an adversary’s mind. But our own unease ought to get at least as much priority as the unease of governments in Eastern Europe.

Understanding and justifying the strategy are all the more important in that there are costs to this deployment beyond the material costs of personnel and equipment. Some of those costs involve relations with Russia.

The Russians have a strong case in complaining that such a deployment violates understandings reached with them as the Cold War was ending and that were directly linked to Moscow’s acquiescence in peaceful reunification of a Germany that everyone realized would have a Western orientation. The understandings were further codified a few years later in a joint statement by NATO and Russia.

The U.S. administration seems to be dancing around the issue of permanent deployments in Eastern Europe by using what technically are temporary rotations of troops, similar to the game it is playing with the U.S. public regarding how many U.S. troops are in Iraq. De facto reneging on previous understandings ought to worry anyone concerned about U.S. credibility. And we should remember how much difference Russian cooperation, or lack of it, can make in dealing with problems such as the war in Syria.

We also need to think, beyond simple reassurance, about possible reactions of the East European governments. For them to be a little nervous about what Russia might do is not necessarily a bad thing. It would not be in our interests or the interests of European stability, for example, for the Latvian government to be too relaxed about Russian reactions when it makes decisions about the treatment of its ethnic Russian minority — a matter with the potential to trigger a crisis-instigating response by Moscow.

Paul R. Pillar worked as an analyst for 28 years at the Central Intelligence Agency. He is a visiting professor of security studies at Georgetown University. This article was reprinted on Consortium News from the author’s blog on the conservative National Review.