The lead, Western warmaking/regime-change countries intervening in northern Iraq and Syria held a strategy conference of their ministers of war in Paris on January 20. The meeting made waves in Canada because Ottawa was not invited to attend. 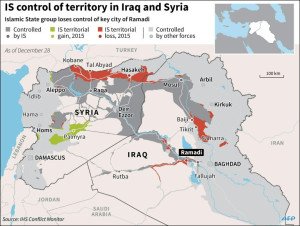 The meeting of ministers of the United States, Britain, Germany, France, Italy, Australia and the Netherlands discussed ongoing plans for intervention in Syria and Iraq. Canada is fully engaged in that intervention, more so than some of the other countries attending in Paris. For example, neither Italy or Germany have fighter aircraft engaged in bombings. But Canada was not invited to the party because Prime Minister Justin Trudeau made a promise during the national election campaign of October 19, 2015 that, if elected, his government would withdraw its six fighter-bomber jets from the U.S.-led warmaking alliance and instead focus on ground operations, including training of allied Iraqi and Kurdish forces.

The decision not to invite Canada was likely taken by U.S. Secretary of Defense (sic) Ashton Carter. Never mind that the new Trudeau government is not keeping its electoral promise or that, to the contrary, it has promised to step up its military presence in northern Iraq. No, for the U.S. government, any deviation from its lead in the imperialist war agenda is punishable by shunning. 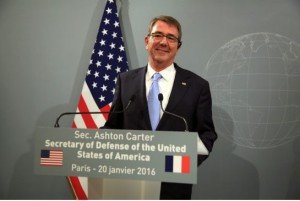 The U.S. views the Canadian electoral promise as a weak-kneed sop. It cares not a whiff about the war-weary Canadian public, repelled by Canada’s failed military intervention in Afghanistan. That intervention goes back to late 2001. 158 Canadian soldiers died in combat in Afghanistan. At least 59 of those who served have killed themselves upon their return, while, shamefully, the previous Conservative government in Ottawa did all it could to reduce to a minimum disability payments to injured, returned soldiers.

The U.S. snub is intended as a warning to the Trudeau government just in case any of its members are actually considering keeping their election promise. It needn’t worry, there is no evidence that any are doing so. Also, importantly, the snub is serving as a rallying cry for pro-war ideologues in Canada who never liked the election promise in the first place and now want it definitively buried.

The enclosed opinion article in the Globe and Mail is exactly the kind of knee-jerk, pro-war backlash that the U.S. government wanted to foment. The writer, David Bercuson, is a well-known military academic in Canada. He directs his criticisms not at the United States government for snubbing its loyal ally but at the Trudeau government for giving the U.S. a reason to do so.

Bercuson wrote a commentary last month in the Globe saying that Prime Minister Trudeau was asking for trouble with his allies by making flaky election promises over war and intervention in the Middle East.

Columnist Thomas Walkom of the Toronto Star, Canada’s largest circulation newspaper, provides a different view of the snub in a January 18 column. He calls it a “welcome snub”. He says, “Trudeau’s Liberals won power on a pledge to end Canada’s combat mission in Iraq and Syria — in the air and on the ground. If they are serious about this, why should we expect the Americans to include Ottawa in their combat deliberations?

“More to the point, why should we want to be included?”

Ottawa is lucky to have carte blanche, more or less, in working out the subtleties of its desired intervention in Iraq and Syria. The two large opposition parties in Parliament support military intervention in the Middle East, differing only on how that should be done. Meanwhile, antiwar forces are weak and marginalized. Years of confusion over the regime change agenda of the imperialist countries in the in Africa and the Middle East (Mali, Libya, Egypt, Syria) combined now with utter disarray in the face of the anti-Russia drive of NATO have left antiwar forces marginalized.

There are disturbing historical precedents for Canada’s exclusion from Wednesday’s meeting of the “core countries” of the anti-Islamic State coalition in Paris. The defence ministers of the United States, Britain, Germany, France, Italy and the Netherlands met to discuss the future of the campaign. Canada’s Defence Minister, Harjit Sajjan, wasn’t invited.

Whoever decided that Canada is not important enough to be consulted – most probably U.S. Secretary of Defence Ashton Carter – apparently does not consider our military effort there important enough to invite Mr. Sajjan. Never mind that Germany has not dropped a bomb or fired a bullet in the campaign.

The fact is, Canada has been excluded from higher decision-making in coalition operations before and will be again, unless a Canadian government makes it clear to the United States or any other ally that when Canadian lives are at stake, Canada insists on full representation in any decision-making or Canada does not participate.

The scale is much different, but in the Second World War, Canada sent well over one million men and women to fight but was never asked to take part in higher decision-making. Even when president Franklin D. Roosevelt and prime minister Winston Churchill met, twice, in Quebec City to discuss higher war strategy, Canadian prime minister Mackenzie King sat with them for press photos, but was barred from the room when the discussions took place.

Churchill didn’t want him there because he wanted to be treated by the United States – and seen by Soviet leader Joseph Stalin – as the sole leader of the entire Commonwealth war effort.

Roosevelt didn’t want him there because he did not want to share decision-making with what he considered a minor player. After all, as the Americans said several times in the war, if Canada is invited, why not Brazil? Of course, Brazil’s entire war effort consisted of about 1,000 soldiers sent to Europe and helping the United States hunt Nazi subs off its own coastlines.

As for King, he didn’t want to be in the room anyway. He was content to generate an entire land army, thousands of planes and air crew and hundreds of ships for the war effort, but felt uncomfortable at the very thought of putting Canadian views directly to Roosevelt and Churchill. Thus, King found out about D-Day hours after it had started, and not before.

The same thing happened in the Korean War, where Canada warships, combat pilots and close to 30,000 ground troops fought for two and a half years. The Americans ran the war and made the key decisions without any strategic Canadian input or even information as to what the higher military strategy was.

And it happened again in Afghanistan, where U.S. secretary of defence Donald Rumsfeld asked Canada to re-enter Afghanistan in 2003, and move to Kandahar province in 2005, but made key strategic decisions about the war far from Canadian ears.

Time after time, Canada throws in with our allies and puts blood and treasure on the line, only to be ignored by Washington.

No one can know what Mr. Carter was thinking when the invitations to the Paris meeting went out. Perhaps the confusion in Ottawa since the end of October as to what role Canada intends to play in this coalition under Prime Minister Justin Trudeau contributed to the lapse. In November, Canadians were told that “our allies have no problem with us withdrawing our jets.” Apparently they do. Perhaps Mr. Carter believes, as Roosevelt did, that if Canada is invited, then Brazil is also worthy of a seat at the table. Of course, Brazil doesn’t have a dog in this fight, but never mind.

Or perhaps Canada’s constant failure to actively insert itself in discussions such as this when the lives of our military are at stake has left us, once more, at the altar with no groom. Maybe Mr. Trudeau should consider this when he thinks about the “state dinner” President Barack Obama is throwing for him in March. Rubber chicken at the White House is no substitute for respect.

David Bercuson is director of the Centre for Military, Security and Strategic Studies at the University of Calgary and a Fellow of the Canadian Global Affairs Institute.

… The pressure is piling on the government’s defence agenda from all sides. One particularly damning commentary doing the rounds points out that, according to estimated expenditures for 2015, only four NATO members are expected to spend less as a percentage of GDP than Canada  and one of them is Luxembourg. The author of that piece was Roland Paris, Justin Trudeau’s new foreign policy adviser.