The United States and Russia are hoping that the partial Syrian ceasefire agreement they reached Monday to take effect February 27 will begin a new phase of the war. The ceasefire will not apply to operations against al-Qaeda’s franchise in Syria (al-Nusra Front), and the two powers have apparently agreed to try to split off a significant number of armed opposition groups from their cooperation with al-Nusra Front. 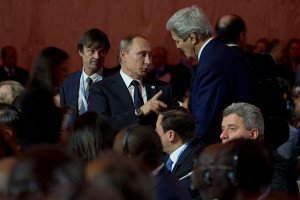 Along with continued Russian, Syrian and Iranian operations against al-Nusra Front, that split could further weaken the al-Qaeda franchise and begin a process of winding down the war between the Assad regime and military forces other than ISIS.

It is by no means certain that the U.S.-Russian agreement will have that effect. The two powers, as co-chairs of the International Syria Support Group (ISSG) have said they have gotten the assent of their allies in the group as well as Russia’s Syrian government ally. But Turkey and Saudi Arabia are known to be unhappy with U.S. policy, and it is unclear whether they would seek to undermine the agreement by encouraging armed groups not to give up the fight.

If the agreement does make any substantial progress toward that end, it will be a consequence of Russian and Syrian military success in threatening to cut the supply lines between the al-Nusra Front-led coalition of armed groups and the Turkish border. That success may be the only chance for ending the bloodletting in Syria, but it has come at a high price: A vastly increased tempo of airstrikes and some questionable targeting has caused a major increase in civilian casualties.

The Russian-led offensive has also upended the calculation the Obama administration and its Sunni allies had made ever since 2013 that the opposition forces led by al-Nusra Front could tip the military balance against the Assad regime sufficiently to pressure President Bashar al-Assad himself to step down. So the Obama administration has now shifted its strategy to exploit the very Russian intervention it had initially attacked in the hope of moving a large part of the armed opposition from the battlefield to the negotiating table.

Russia and the United States had long agreed that al-Nusra Front is a terrorist group that could not be part of a cease-fire agreement. But the Obama administration has refused in the past to acknowledge that armed groups that have gotten U.S. arms have been fighting in coordination with al-Nusra Front. As recently as last week, Secretary of State John Kerry was demanding that Russia had to halt its strikes against what he called “legitimate opposition groups” or there would be no cease-fire. Kerry evidently dropped that stance, however, in negotiations with Moscow. A crucial feature of the agreement reached on Monday by Kerry and Russian Foreign Minister Sergei Lavrov was to develop a joint U.S.-Russian map of the actual location of al-Nusra Front forces and those of other armed organizations in northern Syria. The clear implication of that agreement is that any military organization operating within close proximity to al-Nusra Front troops is a fair target for Russian airstrikes.

That much became clear in the State Department briefing Monday when State Department spokesman Mark Toner was asked by a reporters whether there was a problem of “commingling” of Syrian opposition groups that the United States had been supporting with al-Nusra Front forces and whether the United States was calling on al-Nusra’s erstwhile allies to stop fighting alongside al-Nusra or face Russian strikes. Toner initially declared, “We believe we can delineate between Nusrah and Daesh and other moderate opposition groups on the ground.”

But after a very long exchanges with reporters, he acknowledged, “Yes, I believe there is some commingling of these groups.” And Toner went on to say, “We, the ISSG, have been very clear in saying that al-Nusrah and Daesh are not part of any kind of cease-fire or any kind of negotiated cessation of hostilities. So if you hang out with the wrong folks, then you make that decision…. You choose who hang out with, and that sends a signal.”

The combination of military pressure on the al-Nusra Front and its allies and the Obama administration’s decision to make clear to armed organizations that they must make a clear decision to separate themselves from al-Nusra Front operations takes the conflict into uncharted territory.

Under the U.S.-Russian agreement, armed opposition groups other than al-Nusra Front and Daesh must declare their readiness to abide by a cease-fire by midnight Friday Damascus time. News media reaction to the agreement has revolved mainly around the lack of arrangements for monitoring the cease-fire and verifying who is violating it. But the real issue is what incentives the armed opposition groups have to abide by a cease-fire.

The calculations that will be made by each armed opposition group will be slightly different, depending on how it views the likely future trends in the war, how dependent it believes it is on cooperation with al-Nusra front for its military effectiveness, and how distrustful it is of the Assad regime, their external supporters and al-Nusra front itself.

No one believes that the entire opposition will abandon al-Nusra Front. The reality that has shaped the nature of the war since 2013 has been that virtually all armed opposition groups that were not already partisans of an Islamic emirate in Syria gravitated to tight military alliances with al-Nusra, because the latter had superior organization and highly effective military tactics. Also, such cooperation was being urged on them by Turkish, Saudi and Qatari agents who were generous with heavy weaponry, and the Obama administration supported its allies in the hope that it would force Assad to step down but not cause the collapse of the secular Syrian state apparatus.

That has meant that the non-Jihadist and non-Salafist anti-Assad groups have effectively become junior partners of al-Nusra Front and its closest ally Ahrar al Sham in “operations rooms” for coordination of military activities in the strategic northern provinces of Idlib and Aleppo. Reuters reported in April 2015 that CIA-supported rebels who coordinated their combat role with al-Nusra in the successful offensive to take over Idlib province were not even allowed to be part of the “operations room” for the offensive.

So even armed groups that have been supported by the CIA in the past are not “commingled” physically with al-Nusra forces may feel that they would be unable to carry out operations independently of al-Qaeda. And in fact most would be vulnerable to being attacked and even taken over by al-Qaeda. For many of them, participation in the cease-fire would likely mean giving up resistance to the Assad regime entirely. That may be a very difficult choice for some organizations to make – unless they believe the battle is likely to be lost in any case.

It seems certain that the U.S.-Russian initiative will produce some split in what has been a united front of forces fighting the Assad regime. Jaish al Islam, the third largest anti-Assad organization apart from Daesh, whose physical base in the Damascus area, is already integrated into the negotiating structure. Its leader, Mohammed Alloush, is already the chief negotiator for the High Negotiations Committee team, which has officially represented the opposition in Geneva.

On the other hand, Ahrar al-Sham, the largest anti-Assad fighting force in the war other than al-Nusra Front and Daesh, which the Obama administration and its allies had hoped could be lured into negotiations, is certain to reject the cease-fire. It is simply too closely intertwined with al-Nusra Front to detach itself politically or physically, and it joined al-Nusra Front in denouncing the negotiations process.

At least for the time being, al-Nusra Front and Ahrar al Sham will likely remain a powerful coalition of fighting forces in the two northern provinces. The cease-fire agreement can increase the pressure on the al-Qaeda in Syria, but cannot by itself end the war any time soon. That will still depend on results on the battlefield – with all its attendant human costs.

Stories like this are published thanks to the generous support of our readers. Help ensure Truthout can keep publishing – sign up today to make a small donation each month and keep independent news alive! 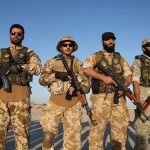 On the front line with the Iranian Revolutionary Guards battling outside Aleppo, SyriaMultipolarity 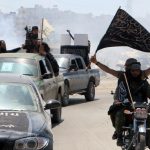