NATO military vehicles with American flags that were put on display in a central square of Chisinau, Moldova’s capital, had to withdraw before today’s V-Day march and retreat outside the town after the show-off sparked fierce opposition from the locals. 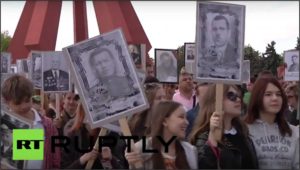 Victory Day commemoration march in Chisinau, Moldova on May 6, 2016

The exhibition of U.S. military equipment on the city’s Great National Assembly Square on Sunday was presented as part of the V-Day celebrations, but instead provoked hundreds of protesters to take to the streets in outrage. Activists opposing NATO’s presence in the country waved banners that read “Go home,”“We don’t need NATO,” and “Moldova is a neutral state.”

Protesters also reportedly handed out St. George ribbons, a symbol of victory in post-Soviet states, to the American soldiers before the exhibition, which saw about two dozen infantry, engineering vehicles and military trucks being showcased to the public. However, soon after the protests began, the exhibition was rolled up, and the U.S. troops returned to their stationing site in Negresti, some 20 kilometers outside Chisinau.

The American-NATO troops were supposed to join the V-Day march on May 9 to celebrate the victory over the Nazis and commemorate those fallen in the WWII. Following the ensuing controversy, however, the contingent was allowed only to hold the ill-fated military exhibition ahead of the event.

Igor Dodon, head of the Moldovan Socialist party, branded the invitation of NATO troops to take part in V-Day festivities as a “provocation geared to spoil the Victory celebrations,” TASS reported.

“NATO servicemen have committed another symbolic act of mockery over Orthodox believers, having once again demonstrated their occupational intentions,” he added, according to Sputnik.

Dodon had slammed the exercises earlier as a “military occupation” and called the display of American troops on V-Day a “slap in the face of Constitution, which stipulates neutrality.”

The activists lashed out at the government for what they believe was an attempt to drag Moldova into some kind of a military confrontation, demanding that the government adhere to its neutral status.

“Moldova is a peaceful and neutral state. We take part in no military blocs and don’t want war. We saw what happened in Yugoslavia, Libya, Syria. If you don’t go before tomorrow, there will be thousands of us here,” stressed Vlad Batrîncea, a Moldovan MP from the Party of Socialists, as cited by TASS.

Last week, the country’s president, Nicolae Timofti, also took a stance against the demonstration of U.S. military prowess on May 9, on which the celebrations were scheduled, while confronting Moldovan Defense Minister Anatol Salaru in a letter published on Wednesday.

“A joint display of US and [Moldovan] military hardware may cause negative interpretations and speculations not only in a certain segment of the population but also among Moldova’s partners who have not been invited to participate in the show,” Timofti said.

In the run up to V-day, the Immortal Regiment march was held in Chisinau on May 6. The participants held up pictures of their relatives who fought in WWII as a part of worldwide public action honoring victims of the war and celebrating victory over Nazism. A similar march is set to take place on May 9.

About 200 U.S. soldiers from the 2nd Cavalry Unit have been deployed in Moldova since May 3 to take part in NATO’s Dragon Pioneer 2016 exercises that will last till May 20. They have been joined by 165 Moldavian servicemen. Fifty-eight military vehicles from the U.S. side are expected to take part in the drills. The maneuvers will concentrate on medical treatment and evacuation, field maintenance, and basic demolitions.

NATO’s only purpose is to demonize Russia as a threat’

Srdja Trifkovic, foreign affairs editor at Chronicles magazine, told RT he believes NATO had practical reasons for promoting itself into the center of V-Day celebration in Chisinau.

“It’s perfectly cynical attempt to distort the past for the sake of serving political purposes of the present,” he said referring to attempts by the American politicians, including to U.S. President Barack Obama, to portray the U.S. as the key member of the anti-Hitler coalition whose actions were critical to the defeat of Nazi Germany.

Triflovic reminded that “almost 85% percent of German losses in WWII were incurred on the Eastern Front,” the fact which is often looked over by the Western media and international public discourse, that play a “pernicious role” while “systematically trying to undermine the image of Russia.”

“It’s an attempt to systematically distort the past and demonize Russia today,” he said.

Speaking about NATO`s ultimate goals and purposes of its existence now, once the cold war ended and the Soviet Union collapsed, he said that “NATO is not idiot at all. NATO has been expanding ever since the promise by James Baker [former U.S. Secretary of State] to Mikhail Gorbachev more than a quarter of century ago that it will not expand.”

The alliance’s “only purpose of existence is to turn Russia into a threat,” he concluded. 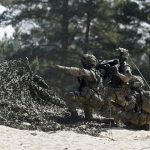 NATO to send 4,000 troops to border with Russia-reportEurope - East 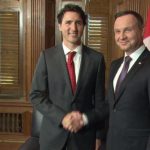