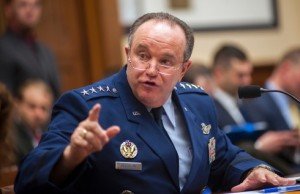 Speaking before the House Armed Services Committee on security challenges in Europe, Breedlove outlined challenges ranging from a “resurgent, aggressive” Russia, mass migration of refugees, and the threat of terrorism from the Islamic State of Iraq and the Levant.

Because of these challenges, the general said, tailored, supportable increases in capabilities are needed, as called for in the Defense Department’s fiscal year 2017 budget request.

“Eucom is standing firm to meet this array of challenges,” he told the panel, adding that European allies are willing, capable partners.

“The U.S. and NATO must take a 360-degree approach to security — addressing the full-spectrum of security challenges from any direction and [ensuring] we are using all elements of our nation’s power,” Breedlove’s written testimony said.

Russia has “chosen to be an adversary and poses a long-term existential threat” to the United States and U.S. allies and partners in Europe, he told lawmakers.

Russia wants to “rewrite” the agreed rules of the international order, he said.

“To counter Russia, Eucom, working with allies and partners, is deterring Russia now and preparing to fight and win if necessary,” he said.

Russia is eager to exert unquestioned influence over its neighboring states to create a buffer zone, the general said, adding, “Russia is extending its course of influence yet further afield to try to reestablish a leading role on the world stage.”

Despite what he described as Russian pronouncements to the contrary, Russia has done little to counter ISIL in Syria, Breedlove said. Instead, Moscow has done a “great deal to bolster the Assad regime and its allies,” he remarked.

Russian involvement in Syria has “wildly exacerbated the problem,” changing the dynamic in the air and on the ground, he said.

“Russia and the Assad regime are deliberately weaponizing migration from Syria in an attempt to overwhelm European structures and break European resolve,” he said.

ISIL is “spreading like a cancer” and has expanded its operations throughout the Eucom area of responsibility, Breedlove said. It is threatening European nations and the U.S. with terrorist attacks, he added.

The terrorist group’s “brutality is driving millions to flee from Syria and Iraq, creating an almost unprecedented humanitarian challenge,” he added.

More than 1 million refugees or economic migrants arrived in Europe last year, fleeing Syria, Afghanistan, Iraq and parts of Africa, according to Breedlove’s written testimony. There is concern that terrorists might look to recruit from within the population of refugees, he said.

The general highlighted the importance of continued congressional support for the European Reassurance Initiative, which he said counters Russian aggression and other threats.

“This year’s budget request reflects our solemn commitment to the security of our allies and partners and to protecting our homeland forward,” he said.

The request seeks to quadruple funding for the initiative to $3.4 billion, Breedlove noted.

“Together the tools [the initiative] would provide would send a clear and visible message to all audiences of our strong will and resolve,” Breedlove said. “Our further efforts to assure, deter and defend, supported by [the European Reassurance Initiative, would complement those of the entire whole-of-government team.”

﻿ The Syrian ceasefire is under attack from within the Obama administrationFeature Articles, Multipolarity

U.S. military spending vs. the worldMultipolarity