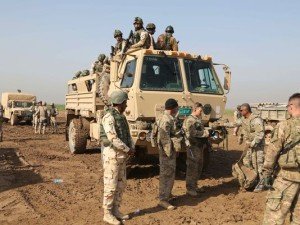 It was suddenly announced last week that the Iraqi army was taking territory from Islamic State forces in what was presented as the first steps in an offensive to recapture the city of Mosul. It sounded as if the self-declared Caliphate was crumbling and was particularly welcome news since it coincided with the Isis suicide bombings in Brussels. The message was that Isis might be able to slaughter civilians in Europe, but was being defeated on its home turf in Iraq and Syria.

I was particularly interested in the attack because two months ago I had been with the Iraqi Kurdish Peshmerga in Makhmour, the town in the front line between Mosul and the Kurdish capital Erbil, where the offensive by the 15th Division of the Iraqi Army was said to have taken place. At that time, local Kurdish commanders said that there was little fighting and they did not expect an offensive to recapture Mosul, which Isis had captured in June 2014, to happen any time soon.

Several weeks later in February, I was travelling on the main road between Baghdad and Kirkuk when I was held up by a large convoy of military vehicles moving north. I asked what was happening and was told that this was the 15th Division heading for Makhmour with the long term intention of joining an Iraqi army-Kurdish Peshmerga assault on Mosul. It did not appear that this was imminent since I did not see any tanks and most of the divisions vehicles were soft-skinned or lightly armoured Humvees.

Back in Baghdad, I asked several senior officials about recapturing Mosul and they all downplayed the idea that this would take place before the end of 2016. It may have been that they knew more than they were saying about what had happened to the 15th Division, said to be 4,500-strong and to be one of the better units in the Iraqi army, in the days immediately after I had seen it on the road.

What had really occurred at Makhmour is significant because it shows the continuing weakness of the Iraqi military as well as the extent to which US military troops are returning to the battlefield in Iraq in far greater numbers than the US administration has been willing to admit.

The 15th Division had indeed established a base near Makhmour where its arrival was greeted by the Iraqi Defence Minister Khalid al-Obaidi. But Nancy Youssef writing in The Daily Beast cites three US defence officials as saying that the Iraqi soldiers had then come under sustained attack from IS fighters and had fled into the mountains, largely abandoning their base. One of the officials is quoted as saying that “they dispersed into the mountains out of an abundance of caution.” Only a few headquarters units stayed behind dug in at the base.

At this point, the US military took an important decision to send its own troops to prop up the Iraqi forces in and around Makhmour. Without any pubic admission or even telling the families of the US soldiers involved, they sent 200 Marines from the Marine Expeditionary Unit with four artillery units to the by now largely abandoned base. Their arrival was wholly contrary to the impression the Pentagon had previously given that US soldiers in Iraq are limited in number and not engaged in front line combat duties. Though the Marines were within rocket range of Isis ten miles away, they were not added to the official US roster of 3,870 troops in Iraq because they were supposedly there on a temporary assignment.

The US public may not have known that their soldiers were back in Iraq defending a fire base, but Isis certainly had observed the arrival of the Marines and the artillery. They began firing rockets at the base, one of which hit a bunker on 19 March, killing Master Sergeant Louis Cardin, a 27-year-old Marine from California, and injuring eight other Marines, three of them seriously. Two days later they made a ground attack in which two Isis fighters were killed.  At this point, the Pentagon was forced to become more open about where Sergeant Cardin had been when he died and admit that Marines were not just acting in support of the Iraqi Army and Peshmerga.

The purpose of sending the Marine unit into such as dangerous place was to revive the morale of the 15th Division and to some extent this was successful. Though US defence officials spoke of the Iraqi troops fleeing into the mountains, they may mean the ridge of steep hills behind Makhmour and not the mountains further north. Last Thursday Iraqi troops supported by the Marine artillery and airstrikes by the US-led coalition captured three abandoned villages in the front line after an advance of less than a mile.

The episode does not bode well for a successful attack to retake Mosul this year. The Iraqi army has never really come together again since its defeat by Isis in northern and western Iraq in 2014. Though it recaptured Ramadi, the capital of Anbar province, which it lost last May the city is largely in ruins with 5,700 buildings destroyed or damaged by airstrikes. The Iraqi ground forces involved were limited in number and largely acted as a mopping up force. This is an ominous sign for any future attack on Mosul, since Isis is likely to fight for it to the last man and could only be defeated if all the buildings in the city were systematically destroyed by US airpower as happened a year ago in Kobani.

The story of the 200 US Marines at Makhmour and the flight of the 15th Division illustrates more than just the fragility of the Iraqi armed forces. It underlines the degree to which the US already has combat troops in Iraq, while all the while claiming that there are no “boots on the ground”. Sergeant Cardin was not officially even in Iraq when he died because he was one of 1,470 US service personnel only temporarily in the country. Taken together with the 3,870 officially there and 1,100 contractors working for the Pentagon in Iraq who are US citizens this brings the total to over 6,400.

The US military have been crowing over how their special forces killed the Isis finance director Haji Iman last week and there is no doubt Isis is under extreme pressure in Iraq. In Syria, the Syrian army backed by Russian airstrikes is close to recapturing Palmyra, while the Syrian Kurds have been pushing south in Hasakah province in the north east of the country. All this looks more impressive on a small scale map than when one travels for hours skirting the Isis front line in Iraq and Syria which one Peshmerga general put at 3,700 kilometres long. Claims of Isis losing control of important roads and supply routes are less significant than appears because Middle East truckers are adept at using makeshift tracks to bypass obstacles.

The speed with which Isis responded to the arrival of the 15th Iraqi Division and the US Marines at Makhmour shows that they are by no means a spent force, their enemies are weaker than they look and the Caliphate is still far from final defeat. 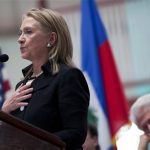 Trump and Clinton: Censoring the unpalatableMultipolarity
Bring on the crackup: Hoping for a Trump–Sanders electionMultipolarity