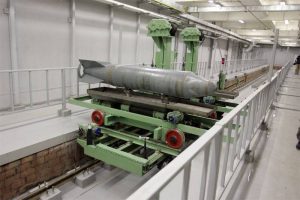 Unlike Russia, the U.S. is not observing its own pledge to dispose of its chemical weapons arsenal, the President Vladimir Putin said ahead of the destruction of the last batch of Russian chemical weapons on Wednesday.

“Russia strictly complies with its international obligations, including those related to non-proliferation and reductions of weapons of mass destruction,” Putin said.

“Historically Russia was one of the largest holders of chemical weapons and the U.S. remains one. Unfortunately the U.S. is not observing the deadline for disposing of its chemical weapons. They have pushed the date back three times, citing a lack of funding. This, frankly, sounds strange,” he added.

Putin’s criticism of the U.S. came as the Russian chemical weapons disposal plant near the village of Kizner, Udmurt Republic (Udmurtia), in the Urals destroyed the last remains of the Russian arsenal. Footage of the landmark process showed an artillery shell with a note in Russian saying “Farewell to chemical arms” being emptied and decontaminated at an automated production line.

The president said Russia’s example in delivering on its promise to destroy its arsenal, which was fully met on Wednesday long before the initial deadline, should encourage other nations to follow suit.

Russia began destroying its chemical weapons arsenal in 1996, shortly before ratifying its accession to the Organization for Prohibition of Chemical Weapons, the watchdog of the convention. At the time, Russia’s stockpile of chemical weapons was declared as 40,000 tons, with the U.S. possessing a similar amount.

When the U.S. ratified the Chemical Weapons Convention Treaty in 1997, it agreed to destroy all of its chemical weapons by April 29, 2012. It managed to dispose of about 90 per cent of its stockpile by that deadline.

At the moment there are two sites in America still storing chemical weapons. The Pueblo Chemical Depot is expected to complete the destruction by 2019, while the Blue Grass Army Depot is scheduled to start its stockpile’s destruction in 2020.