WASHINGTON — The Obama administration announced Sunday that it was imposing new, more limited sanctions on some Iranian citizens and companies for violating United Nations resolutions against ballistic missile tests. The move came less than 24 hours after the White House lifted broader sanctions against Iran for its nuclear program. 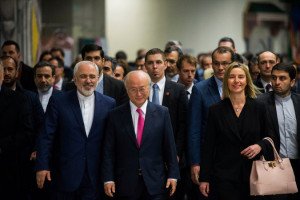 The announcement, which was prepared several weeks ago but delayed by the Treasury Department, was made shortly after a Swiss plane carrying Americans freed by the Iranian authorities departed Tehran. The release of the Americans came a day after Iran and the United States concluded delicate negotiations on a prisoner exchange tied indirectly to the completion of a nuclear agreement.

President Obama on Sunday hailed the agreements with Iran as the beginning of what he hoped would be a new era of constructive relations between two nations, which have been long estranged over ideology and regional ambitions. “This is a good day,” Mr. Obama said in a televised statement from the White House. “We have a rare chance to pursue a new path, a different, better future that delivers progress for both our peoples and the wider world,” said Mr. Obama, who has staked his political credibility on the opening with Iran. “That’s the opportunity before the Iranian people. We need to take advantage of that.”

But Mr. Obama vowed to continue monitoring Iran’s nuclear program to ensure it does not cheat and said he would work to restrain any aggressive behavior by Iran, including terrorist activity and human rights abuses. He also noted the new sanctions on those involved with Iran’s recent ballistic missile tests conducted in violation of United Nations restrictions, but he did not elaborate or dwell on that dispute.

While the optics of the back-to-back sanctions announcements might seem to suggest that Washington was imposing new measures to make up for those that were lifted Saturday, they are actually nowhere near comparable.

The action taken Saturday allowed Iran to re-enter the world’s oil markets; according to some estimates, by the end of the year its exports may increase by a million barrels a day, yielding roughly $30 million a day in revenue at current prices. Its ships will be able to enter and leave foreign ports, and its people will have access to global financial markets. With a few strokes of a pen, Mr. Obama and Secretary of State John Kerry released more than $100 billion in frozen funds, mostly from past oil sales.

The new sanctions are mostly aimed at individuals and some small companies accused of shipping crucial technologies to Iran, including carbon fiber and missile parts that can survive re-entry forces. The sanctions are so focused on those individuals and firms that most Iranians will never feel them, and the amounts are comparatively tiny.

Mr. Obama also announced Sunday that, in addition to the completion of the nuclear deal and the prisoner swap, the United States and Iran had resolved a three-decade-old financial dispute. The United States will return Iranian money held since the hostage crisis of 1979-81 with interest — but far less than Iran had been seeking, Mr. Obama said. Administration officials had denied that the missile sanctions were being delayed for political reasons.

Relatives of three of the freed Americans — Jason Rezaian, Amir Hekmati and Saeed Abedini — expressed joy after getting phone calls from the State Department that their family members were en route to Switzerland and then on to an American air base in Germany. The three men arrived first in Geneva on Sunday, accompanied by Mr. Rezaian’s wife, Yeganeh Salehi, and mother, a State Department official, Brett McGurk, said in a Twitter message. They then continued on to Germany.

The fourth American freed in the exchange, Nosratollah Khosravi — whose incarceration had not been reported until the prisoner exchange was announced Saturday — was not on the plane, American officials said. It was not immediately clear why.

Iran’s president, Hassan Rouhani, did not address the prisoner swap on Sunday. At a news conference, he said that since the sanctions were lifted, the door had opened for foreign investments in the country, even by American companies. “They can invest here anytime, but they have their own obstacles to do so,” Mr. Rouhani said. He did not comment on whether the lifting of the sanctions after two years of talks with world powers, including the United States, would lead to more cooperation by Iran in Syria. Instead, he promised Iran a new and better future.

The family of Mr. Hekmati, 32, a former Marine incarcerated in Iran longer than any of the others, issued a statement expressing relief that he was out of Iran. “It is hard to put into words what our family feels right now,” the family said. “But we remain in hopeful anticipation until Amir is in our arms.”

The family of Mr. Rezaian, 39, the Washington Post’s Tehran correspondent, also expressed enormous relief after an agonizing 24 hours between when the exchange was publicly disclosed and when they received confirmation that the Americans had left. Mr. Rezaian was arrested in July 2014 on vague charges that included spying. The Washington Post and news media advocates around the world defended his innocence and protested increasingly loudly about his case.

“I am incredibly relieved that Jason is on his way home,” Mr. Rezaian’s brother, Ali Rezaian, said in a statement. “He is a talented journalist, who was simply doing his job fairly, accurately and lawfully.” He added: “Today is an incredible day for all of us.”

Naghmeh Abedini, the wife of Mr. Abedini, a 35-year-old pastor from Boise, Idaho, said she had been up all night awaiting the State Department’s phone call. “They have finally left Iranian soil!” she said in a text message. She said that she and members of the Rezaian and Hekmati families were planning to meet with their loved ones in Germany over the next few days.

An American who had been arrested several weeks ago in Tehran, where he was studying Farsi, also was freed to leave the country as part of the negotiations to free the other Americans. The arrest of that American, Matthew Trevithick, had not been publicly disclosed until the prisoner exchange was announced on Saturday.

The United States released seven Iranians held on sanctions violation charges as part of the prisoner exchange and rescinded international arrest warrants on 14 others. The Iranian authorities considered the Americans released in the exchange to be Iranian citizens because of their dual nationalities. Publicly, government officials in Iran said they were not legally obligated to afford the prisoners the same rights given to other foreigners arrested in the country.

The exchange went a long way toward resolving an increasingly emotional side dispute between the two countries, one complicated by a legacy of hostility and mistrust built over the 35 years since the Islamic Revolution and the American hostage crisis in Tehran, where 52 Americans were held for 444 days. Nonetheless, at least one other American, Siamak Namazi, a business consultant, remained held in Iran. He was arrested in October for unclear reasons. American officials have said they are still working to have him released.

Mr. Trevithick’s departure from Iran was handled separately, and he was not on the Swiss plane, his family said.

VIENNA — The United States and European nations lifted oil and financial sanctions on Iran and released roughly $100 billion of its assets after international inspectors concluded that the country had followed through on promises to dismantle large sections of its nuclear program.

This came at the end of a day of high drama that played out in a diplomatic dance across Europe and the Middle East, just hours after Tehran and Washington swapped long-held prisoners…