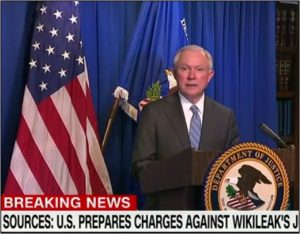 The Justice Department investigation of Assange and WikiLeaks dates to at least 2010, when the site first gained wide attention for posting thousands of files stolen by the former U.S. Army intelligence analyst now known as Chelsea Manning. Prosecutors have struggled with whether the First Amendment precluded the prosecution of Assange, but now believe they have found a way to move forward.

During President Barack Obama’s administration, Attorney General Eric Holder and officials at the Justice Department determined it would be difficult to bring charges against Assange because WikiLeaks wasn’t alone in publishing documents stolen by Manning. Several newspapers, including The New York Times, did as well. The investigation continued, but any possible charges were put on hold, according to U.S. officials involved in the process then. 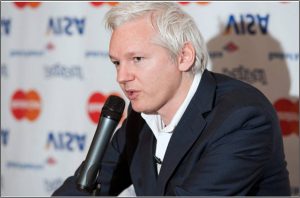 The U.S. view of WikiLeaks and Assange began to change after investigators found what they believe was proof that WikiLeaks played an active role in helping Edward Snowden, a former NSA analyst, disclose a massive cache of classified documents.

Assange remains holed up in the Ecuadorian embassy in London, seeking to avoid an arrest warrant on rape allegations in Sweden. In recent months, U.S. officials had focused on the possibility that a new government in Ecuador would expel Assange and he could be arrested. But the left-leaning presidential candidate who won the recent election in the South American nation has promised to continue to harbor Assange.

Last week, ON April 13, in a speech at the Center for Strategic and International Studies in Washington, CIA Director Mike Pompeo went further than any U.S. government official in describing a role by WikiLeaks that went beyond First Amendment activity. He said WikiLeaks “directed Chelsea Manning to intercept specific secret information, and it overwhelmingly focuses on the United States.”

“It’s time to call out WikiLeaks for what it really is: A non-state hostile intelligence service often abetted by state actors like Russia,” Pompeo said.

Still, the move could be viewed as political, since Assange is untouchable as long as he remains in the Ecuadorian embassy and Ecuador has not changed its stance on Assange’s extradition.

Attorney General Jeff Sessions said at a news conference on April 20 that Assange’s arrest is a “priority.”

“We are going to step up our effort and already are stepping up our efforts on all leaks,” he said. “This is a matter that’s gone beyond anything I’m aware of. We have professionals that have been in the security business of the United States for many years that are shocked by the number of leaks and some of them are quite serious. So yes, it is a priority. We’ve already begun to step up our efforts and whenever a case can be made, we will seek to put some people in jail.”

“We’ve had no communication with the Department of Justice and they have not indicated to me that they have brought any charges against Mr. Assange,” said Assange’s lawyer, Barry Pollack. “They’ve been unwilling to have any discussion at all, despite our repeated requests, that they let us know what Mr. Assange’s status is in any pending investigations. There’s no reason why WikiLeaks should be treated differently from any other publisher.”

Pollack said WikiLeaks is just like the Washington Post and the New York Times, which routinely publish stories based on classified information. WikiLeaks, he says, publishes information that is in “the public’s interest to know not just about the United States but other governments around the world.”

Assange has also compared WikiLeaks to a news media organization that uses documents provided by whistleblowers to expose the actions of governments and powerful corporations.

“Quite simply, our motive is identical to that claimed by the New York Times and The Post — to publish newsworthy content,” Assange wrote in a recent op-ed [April 10] in The Washington Post. “Consistent with the U.S. Constitution, we publish material that we can confirm to be true irrespective of whether sources came by that truth legally or have the right to release it to the media. And we strive to mitigate legitimate concerns, for example by using redaction to protect the identities of at-risk intelligence agents.”

In his speech last week, Pompeo rejected that characterization and said Assange should not be afforded constitutional free speech protections. “Julian Assange has no First Amendment freedoms. He’s sitting in an Embassy in London. He’s not a U.S. citizen,” Pompeo said.

Rep. Peter King, R-New York, told CNN‘s Wolf Blitzer that based on CNN‘s reporting, “I’m glad that the Justice Department has found a way to go after Assange. He’s gotten a free ride for too long.”

But Ben Wizner, director of the American Civil Liberties Union’s Speech, Privacy and Technology Project, argued that U.S. prosecution of Assange sets a dangerous precedent. “Never in the history of this country has a publisher been prosecuted for presenting truthful information to the public,” Wizner told CNN. “Any prosecution of WikiLeaks for publishing government secrets would set a dangerous precedent that the Trump administration would surely use to target other news organizations.”

By Glenn Greenwald, published on The Intercept, April 14, 2017

In February, after Donald Trump tweeted that the U.S. media were the “enemy of the people,” the targets of his insult exploded with indignation, devoting wall-to-wall media coverage to what they depicted as a grave assault on press freedoms more befitting of a tyranny. By stark and disturbing contrast, the media reaction yesterday was far more muted, even welcoming, when Trump’s CIA Director, Michael Pompeo, actually and explicitly vowed to target freedoms of speech and press in a blistering, threatening speech he delivered to the D.C. think tank Center for Strategic and International Studies. 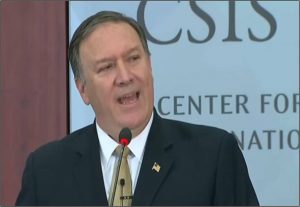 What made Pompeo’s overt threats of repression so palatable to many was that they were not directed at CNN, the New York Times or other beloved-in-D.C. outlets, but rather at WikiLeaks, more marginalized publishers of information, and various leakers and whistleblowers, including Chelsea Manning and Edward Snowden.

Trump’s CIA Director stood up in public and explicitly threatened to target free speech rights and press freedoms, and it was almost impossible to find even a single U.S. mainstream journalist expressing objections or alarm, because the targets Pompeo chose in this instance are ones they dislike – much the way that many are willing to overlook or even sanction free speech repression if the targeted ideas or speakers are sufficiently unpopular.

Decreeing (with no evidence) that WikiLeaks is “a non-state hostile intelligence service often abetted by state actors like Russia”  a belief that has become gospel in establishment Democratic Party circles – Pompeo proclaimed that “we have to recognize that we can no longer allow Assange and his colleagues the latitude to use free speech values against us.” He also argued that while WikiLeaks “pretended that America’s First Amendment freedoms shield them from justice,” but: “they may have believed that, but they are wrong.”

He then issued this remarkable threat: “To give them the space to crush us with misappropriated secrets is a perversion of what our great Constitution stands for. It ends now.” At no point did Pompeo specify what steps the CIA intended to take to ensure that the “space” to publish secrets “ends now”

Before delving into the chilling implications of the CIA Director’s threats, let’s take note of an incredibly revealing irony in what he said. This episode is worth examining because it perfectly illustrates the core fraud of U.S. propaganda.

In vilifying WikiLeaks, Pompeo pronounced himself “quite confident that had Assange been around in the 1930s and 40s and 50s, he would have found himself on the wrong side of history.” His rationale: “Assange and his ilk make common cause with dictators today.”

But the Mike Pompeo who accused Assange of “making common cause with dictators” is the very same Mike Pompeo who – just eight weeks ago – placed one of the CIA’s most cherished awards in the hands of one of the world’s most savage tyrants, who also happens to be one of the U.S. Government’s closest allies. Pompeo traveled to Riyadh and literally embraced and honored the Saudi royal next-in-line to the throne.

This nauseating event – widely covered by the international press yet almost entirely ignored by the U.S. media – was celebrated by the Saudi-owned outlet Al Arabiya: “The Saudi Crown Prince Mohammed bin Nayef bin Abdulaziz al-Saud, Deputy Prime Minister and Minister of Interior, received a medal on Friday from the CIA . . . . The medal, named after George Tenet, was handed to him by CIA Director Micheal Pompeo after the Crown Prince received him in Riyadh on Friday in the presence of Deputy Crown Prince Mohammad bin Salman al-Saud, Deputy Prime Minister and Minister of Defense”…


Julian Assange: Wikileaks has the same mission as the Washington Post and New York Times

On his last night in office, President Dwight D. Eisenhower delivered a powerful farewell speech to the nation — words so important that he’d spent a year and a half preparing them. “Ike” famously warned the nation to “guard against the acquisition of unwarranted influence, whether sought or unsought, by the military-industrial complex. The potential for the disastrous rise of misplaced power exists and will persist.”

Much of Eisenhower’s speech could form part of the mission statement of WikiLeaks today. We publish truths regarding overreaches and abuses conducted in secret by the powerful

Our most recent disclosures describe the CIA’s multibillion-dollar cyberwarfare program, in which the agency created dangerous cyberweapons, targeted private companies’ consumer products and then lost control of its cyber-arsenal. Our source(s) said they hoped to initiate a principled public debate about the “security, creation, use, proliferation and democratic control of cyberweapons”…

Remarks as prepared for delivery by Central Intelligence Agency Director Mike Pompeo at the Center for Strategic and International Studies, April 13, 2017 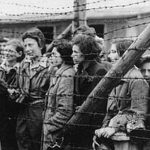 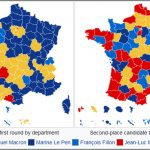